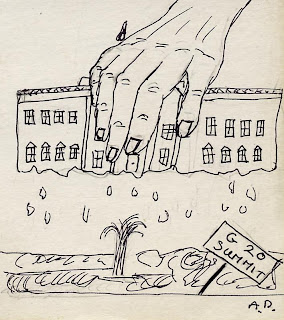 Seeing as it is the above day just a few quick ones.


The G20 summit is taking place in the Whitehouse. I would just like to make a plea-if there is a God-NOW, PLEASE NOW.


Another thing is: I have just downloaded and installed IE8 Beta. And ten minutes later I uninstalled it. It’s a load of crap every time you open a web page you get a message that your Add-Ons’ are disabled even if they aren’t. Or a message asking if you would like to disable the add-on or check for updates.

Conclusion- it’s a load of old bollocks, I know it’s a Beta but wait until the finished product is available, and then think about it.

An inmate of a West German Prison escaped by getting into a cardboard box and “posting” himself out of the jail.

It goes to show that “security” is just as bad in other countries. My only thought is where did he get all the stamps.
That’s all.
No it isn’t, I have had a sudden burst of energy and since it’s been four years and I have no other means of “relieving” my energy, here’s some more.

I know I say some stupid things at times, but this lot make me feel almost intelligent.
So, where's the Cannes Film Festival being held this year?»— Christina Aguilera


“If we don't succeed, we run the risk of failure”- Dan Quayle, former U.S. Vice President


“Smoking kills. If you're killed, you've lost a very important part of your life”- Brooke Shields, during an interview to become spokesperson for a federal anti-smoking campaign

“Whenever I watch TV and see those poor starving kids all over the world, I can't help but “cry. I mean I'd love to be skinny like that but not with all those flies and death and stuff.”- Mariah Carey, pop singer

“It isn't pollution that is hurting the environment, it's the impurities in our air and water that are doing it”
- Dan Quayle, former U.S. Vice-President

And really finally some odd but true names for cities.

And, I suppose there had to be one.