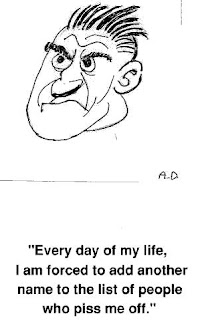 Christmas is only a couple of days away, and my brain cell is shutting down for the “holiday”.

So don’t expect too much in the near future.

I am doing my bi-weekly computer backup today, I only back up the important things like-My Docs and My Pictures, emails and my 200 odd passwords, all the other stuff can be re-installed, I back up to an external HDD which is I think the best way to do it.

Anyway, I am sitting here watching the blue bar creep from left to right and I thought “wouldn’t it be great to be able to back up your memories, and save them on a disk (or disc) depending on your origin.

You could then go through them and delete all the bad ones, then reload all the good ones back into your brain. And yes I know that all memories make you what you are, but after 57 years the old head computer needs a defrag. It must be quite bad because the bleedin computer has just beaten me at chess for the first time in ten years, sod it!

I only thought of this because I am blessed-or cursed with a so called “eidetic” memory, of course no such thing exists, nobody could remember everything they have seen, read or heard.

And it obviously doesn’t work too well, because I failed the eleven- plus, it could have had something to do with one of my mates collapsing in agony with appendicitis during the exam, and then being made to carry on, but I have never been one for “bits of paper” to show how clever I am, apart from the Mensa test, and yes, I passed, I am no longer a member because it got too expensive, and the magazine was Firkin boring.


I see the Gov Is going to open “memory clinics” for people with dementia-sort of defeats the object doesn’t it?

But this reminded me of a sign in LA which reads in huge letters “BLIND SCHOOL” with an arrow pointing the way.

And one near me in Frensham Surrey which reads “DYSLEXIA CENTRE”, if it had read “LYSDEAXI CERNTE ” it might have made sense, the mind boggles.


I have just returned from the “smash and grab” otherwise known as Tescos, what a firkin nightmare, it opened early without telling anyone, and was heaving, not so much with customers but those firkin internet trolleys.

Every time you turn a corner there is a “truncheon” of the damned things, blocking the aisle while the “gatherers” stroll about “picking”.

I know it takes a lot of cars off the road, but part of Christmas used to be doing the shopping, and getting home to the feeling of “all done”, it seems that we are going down the road whereby all we will do is sit at home, working, shopping and communicating until our legs wither away and we are left with just two long fingers to bring everything we need to us, shame.


The news is not Good , the bank of England didn’t understand the severity of the economic crisis before the current Financial crisis, that really gives me confidence, so why are they there?

Twenty odd thousand being made redundant from Woolies, unemployment is increasing “sharply” as if it could increase “bluntly”.

Internet explorer 7 keeps crashing and locking up, I go to the site for the reason and get:

This problem was caused by Windows, which was created by Microsoft Corporation.”

There is no solution for this problem at this time. However, your computer might be missing updates that can help improve its stability and security."

So why tell me you wankers.

And to top it all India is kicking our arse in the cricket.

But never mind the world keeps turning and we won’t be getting any snow, so there is some good news.

If you are so inclined you can read my other mindless ramblings by clicking on the link below.

Angus
Angus Dei blogs on NHS Behind the headlines.
Posted by Angus Dei at 09:03