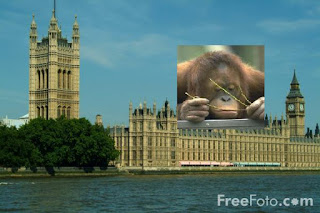 I was really bored last night, and I mean really bored. The TV was crap as usual and I couldn’t concentrate on my book (and yes I do have more than one) so I decided to do some website hopping, it’s like channel hopping and, you can guess the rest.

Anyway, I ended up on the Houses of Parliament site; it must be the masochist in me.

Poking about with a stick I came across the UK Parliament - Bills Before Parliament page, and then I moved on to the Bills and Legislation - Geneva Conventions and United Nations Personnel (Protocols) Bill [HL] bill.

Well it caught my attention, and as you do I opened the PDF file to discover this-Geneva Conventions and United nations Personnel (Protocols) bill.

So I decided to have a “butchers” as they say, I really wish I hadn’t.

Some extracts from the aforesaid Bill: -

Explanatory notes to the Bill, prepared by the Foreign and Commonwealth Office, are
published separately as HL Bill 12—EN.

Lord Malloch-Brown has made the following statement under section 19(1)(a) of the
Human Rights Act 1998:

In my view the provisions of the Geneva Conventions and United Nations Personnel
(Protocols) Bill [HL] are compatible with the Convention rights.

That bits OK I could get my brain cell around it.

And then it happened, I am not sure if I had a stroke at this point but my understanding of the English language deserted me-

1 Amendments of the Geneva Conventions Act 1957

I had now started to sweat because I couldn’t get my brain cell to function, it was interpreting the written words as Gobbledegook.

And then it hit me, they were “talking” about the Red Cross emblem! and who can wear it (I think).

Then it went on-

(5) After subsection (4A) of that section, insert—
“(4B) Subsection (4) of this section shall apply in relation to a design or
wording reproducing or resembling the emblem or a designation
specified in paragraph (f) of subsection (1) of this section as it applies to designs or wording reproducing or resembling an emblem or
designation specified in paragraph (b) or (c) of that subsection.

(4C) But subsection (4) of this section shall not apply by virtue of subsection
(4B) of this section where the use of the design or wording concerned is
such as would appear, in time of armed conflict, to confer the protection
of the scheduled conventions and, where applicable, the first protocol
and the second protocol.

By now I was rolling about on the floor laughing, and I nearly made my bladder implode.

With tears in my eyes I tried to carry on-

The High Contracting Parties,
Reaffirming the provisions of the Geneva Conventions of 12
August 1949 (in particular Articles 26, 38, 42 and 44 of the First
Geneva Convention) and, where applicable, their Additional
Protocols of 8 June 1977 (in particular Articles 18 and 38 of
Additional Protocol I and Article 12 of Additional Protocol II), concerning the use of distinctive emblems,

Desiring to supplement the aforementioned provisions so as to enhance their protective value and universal character,

Noting that this Protocol is without prejudice to the recognized right of High Contracting Parties to continue to use the emblems they are using in conformity with their obligations under the Geneva Conventions and, where applicable, the Protocols additional thereto, Recalling that the obligation to respect persons and objects
protected by the Geneva Conventions and the Protocols additional thereto derives from their protected status under international law and is not dependent on use of the distinctive emblems, signs or signals, Stressing that the distinctive emblems are not intended to have any religious, ethnic, racial, regional or political significance,
Emphasizing the importance of ensuring full respect for the obligations relating to the distinctive emblems recognized in the Geneva Conventions, and, where applicable, the Protocols additional thereto.

But it was no use, I had to stop or I think I would have had a stroke.

If you want to risk a blood clot or failure to control you bowels have a read.

I suppose the point I am trying to make (apart from the comedy value) is that the people we elected to represent our best interests, spend their days debating bills like this, and getting very well paid at the same time, actually believe that this is the way to communicate.

It brought it home to me that MPs are as far removed from our reality as a Martian would be (if they existed).

Is it any wonder that they have managed to firk up the country the way they have, because they are not on the same planet as the rest of us plebs, who have to deal with things like fuel bills, council tax bills, shopping bills and any other flavour of bill you can think of.

Unlike the politicians whose only understanding of “bills” is total bollocks and gobbledegook.


“You have all the characteristics of a popular politician: a horrible voice, bad breeding and a vulgar manner.”