THAT WILL TEACH ME 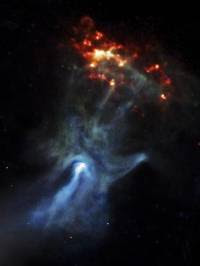 After yesterdays “non” post it happened, this morning at 6 am my alarm went off as usual and I thought “just another ten minutes” I had just closed my eyes and there was an enormous clap of thunder followed by the heavens opening and the rain came down as if someone had poured a giant bucket over the house, and then another clap of thunder.

OK I take the hint, so here are some “news” stories.

A Welsh grandmother came up with the perfect solution after her garden became infested with snails - she's eating them. Ananova

Oriole Parker-Rhodes was unwilling to trample on or poison the creatures, reports the Daily Mail.

So she regularly feasts on their meat, claiming they are higher in protein and lower in fat than beef.

Miss Parker-Rhodes, 59, of Anglesey, said: "Last summer it was really wet and warm - ideal for snails. I had hundreds in my garden. I was treading on them, and they were also eating our home-grown potatoes.

"I'm quite an organic, perma-culture sort of person and didn't want to trample or poison them. That would be against my principles. So I thought eating them made sense."

Miss Parker-Rhodes has now set up an internet blog with recipes at eatinggardensnails.blogspot.com.


Couple of things:-yeuch! And what is a “perma culture sort of person”?

Doctors thought Artyom Sidorkin, 28, had cancer when he began coughing up blood and complaining of agonising chest pains.

But as they operated to remove a tumour, the medics were amazed to discover the perfectly formed spruce thriving inside the lung.

"I blinked three times and thought I was seeing things," said surgeon Vladimir Kamashev at Izhevsk Hospital in Russia.

Doctors believe that Artyom breathed in a tiny seed which then began growing in his lung and that the sharp pains were the plant's needle-like leaves digging into his lung.


My mum always told me not to eat the apple pips.

We think our health service is “iffy” Say What? A Wisconsin nurse was called out of surgery so a health care manager could tell her she was being laid off.

The manager at Dean Health System’s West Clinic in Madison violated medical protocol, according to the Sheboygan Press, when the employee pulled the nurse out of the operating room last week.

A spokesman for Dean Health said the procedure was minor, and the patient wasn’t affected. He declined to name the employees involved or say what type of surgery the nurse was attending when she was told of her layoff.

Err, anyone know how to stitch someone up (think about it)

A DAD was hauled out of bed and arrested for having an ornamental PIG in his garden — after his policeman neighbour claimed it was put there to poke fun at him.

The Sun Shocked Robin Demczak, 57, was dragged off to cells and held for more than 6½ hours as the constable’s colleagues grilled him about the porcelain porker.

He was finally freed without charge after explaining the black pig with white spots had been there for eight years — while the officer had only lived next door for FOUR.


Fuming window fitter Robin — who used to have a PIGGERY in his back garden — slammed the swoop yesterday.

He said: “I was in bed and I could hear police cars outside.

“I was thinking, ‘What’s going on?’ Then I was dragged out by police, arrested and chucked in the back of a police car.

“I was held by them for almost seven hours because having the stone pig apparently counted as harassment.” Neighbour PC John Ablett called in his colleagues

Following a simmering 18-month feud over a footpath that splits his back garden from Robin’s in Witney, Oxfordshire.

The traffic cop insists the former pig farmer has no right to use it.

Robin said: “PC Ablett had me arrested because he didn’t like me keeping my 12-inch porcelain model pig in the back garden.

Although he was freed without charge, Robin was ordered to REMOVE the ornamental pig from the garden of his £200,000 home.

He was also told to STOP calling his outbuilding a sty.

Yesterday Thames Valley police confirmed officers were still looking into the complaint made against him.

A force spokesman said: “We can confirm that a man was arrested on suspicion of harassment in relation to the incident.

“He has been released without charge. But the investigation is still ongoing.

“There was an ornament in the garden and also some writing on a wall.” PC Ablett was last night unavailable for comment.

So who is telling “Porkies” then?


Scotsman.com News A VENGEFUL wife has struck fear into Venice's gondoliers by telling tax inspectors her husband has been taking them for a ride – financially.


A tax investigation was launched after the woman – who was involved in a messy divorce with her gondolier husband – decided to take revenge.
She told them that her husband and the city's other gondoliers were giving false returns and substantially under-declaring their earnings. As a result, Italy's version of the Fraud Squad has launched an investigation into the city's 400 gondoliers.
They are a symbol of Venice, which attracts more than 20 million tourists a year.
Official fees start at 100 (£93) for 50 minutes, with each additional 20 minutes 50, but visitors are often unaware of this and are charged double or even more.
The gondoliers have long been suspected of tax evasion. Many of them declare earnings of between 10,000 and 15,000 a year, but the true figure is said to be double that. As a result of the investigation gondoliers are said to be "getting very nervous.”

A SPINNING star resembling a giant cosmic hand has been captured in images taken by a Nasa observatory orbiting miles above the Earth's surface.

The Chandra X-ray Observatory pictured the star, which measures 12 miles across, about 17,000 light years from Earth.The star, unromantically known as PSR B1509-58, spews energy out into the space around it, forming complicated patterns including one resembling a large hand complete with finger-like structures.

As I said “That will teach me.”


"I hope I never get so old I get religious." Ingmar Bergman

NHS-THE OTHER SIDE
Posted by Angus Dei at 07:40

The escargot way of life.

That story about the tree growing in a lung is amazing and the one about the snail well ermmm Yuk!!!

Quite agree about the snails:)

The tree one may be a bit iffy, it was on the BBC news tonight, and they did point out that trees need light to grow and there is not a ot of light inside the lung-good story though.

You've given me a good laugh. Is that woman with the snails sure she's got the right sort? It's about time someone shopped the gondoliers!