NOT SURE WHAT DAY IT IS

I say that because I actually fell asleep last night, which will teach me because some flesh eating insect got into my bedroom and bit me on the left eyelid, so I now have monocular vision.

And a leer that would get me nicked if I ventured out into the world, so I will sit her in my torpor and attempt to write something vaguely sensible, which would be a first.

The opening gambit was something I heard on Radio 4 this morning, and concerns the digital switch over, Digital UK - Home which is represented by that annoying little robot which I personally could melt down for scrap.

I have already converted my TVs to digital and am ready for the off, which won’t be until 2012 in Hampshire.

The thing that caught my attention was: what will happen to our FM radios when the switch over happens, the reporter said that we will have to scrap them and buy digital radios, and that I suppose includes car radios.

The only reference I can find to this is Nicholas Lezard: Don't force digital radio on us which seems to reinforce the fact that we will not be able to use our FM radios once digital comes in.

Or we will have to listen to “local” stations, and will lose the access to radio 1, 2,3,4,5 the world service and Uncle Tom Cobbly and all.

Bloody cheek, I pay my license fee and this entitles me to watch BBC TV channels and listen to BBC radio channels, will I get a refund if I refuse to buy a new alarm clock/radio, a new Hi-Fi with a tuner and a new portable radio, as well as a new car radio?

Of course I WON’T, because the Government and the BBC have given me no choice in the matter, it is a case of do it or lose it, and never mind the cost to the public, I like digital TV, there is a good choice of programmes, and the quality is much better than analogue, but why haven’t the “powers that be” told us about the radio thing?


Moan over, but it is worth a thought.


Back to the “real world” 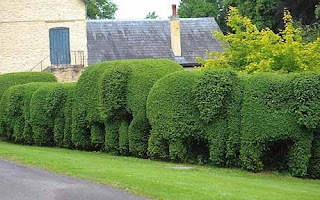 Mr Hogg, 49, fell in love with the wildlife during a safari in Kenya that when he returned home he decided to recreate a little bit of Africa in his back garden.

He painstakingly carved out a seven adult elephants and three babies from his hedgerow.

It took two days to craft the herd with a trimmer, shears – and a pair of scissors for the fiddly bits.

The result is a striking 100ft-long trail of green elephants that stretches around the corner of his family home outside Brecon in Mid Wales.

Great idea, wonder how long it will be before someone complains? 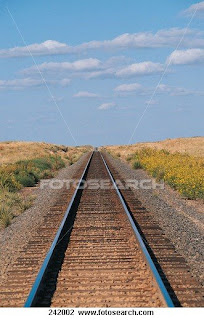 Mobile Phones can kill you; at least they can if you drop it on a railway line:

A man had a miracle escape when he was hit by a 100mph train as he went to retrieve his mobile phone from the railtracks.

Noah Hodgkiss, 56, did not notice the train thundering towards him because he has cataracts and hearing problems.

To make matters worse, the batteries on his hearing aid were flat and he had no idea the train was there until he glanced over his shoulder at the last second.

"I was right in the middle of the two tracks when it happened. Before I knew what was going on it was on me.

"I tried to leap out of the way but it was too late and it hit me from behind. I can't describe how it felt, I was just thinking what was going to happen to me."

Mr Hodgkiss's ordeal happened as he walked in Tibberton, Worcestershire, on Saturday.

He dropped his mobile from the railway bridge but, as he was looking for it, the train slammed into him.


I don’t want to be pedantic here but what use is a mobile phone to someone who has cataracts and is deaf? 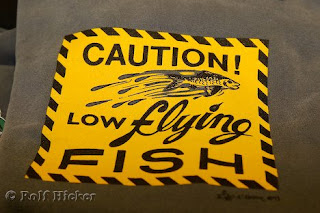 Britain's towns and countryside are being blighted by unnecessary and patronising safety signs, according to a new book

Photographs taken around the country for the publication show beaches featuring warnings that they have "uneven surfaces", and cemeteries advising visitors that "all memorials have the potential to harm".

A poster next to a hedge tells passers-by to "be aware of wasps nesting in this area", and traffic cones are used to designate a smoking zone in a supermarket car park.

Between the Royal Festival Hall and Waterloo Bridge on London's South Bank there are now 95 safety signs, it is claimed, while a double-decker bus displays 24 separate cautions.

The Manifesto Club, a libertarian campaign group that compiled the book from pictures sent in by members, says in many cases the signs do not warn of real dangers.

And with their loud colours and hectoring tones, the book says, the notices disfigure buildings and public spaces.

The book is available at www.manifestoclub.com


You can read it but only if you read the warning sign about cutting yourself on sharp paper. 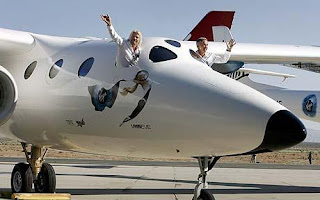 Want to be an astronaut?

Guinness has launched a competition offering drinkers the chance to win a trip into space aboard Sir Richard Branson's. Virgin Galactic Spacecraft

The brewer is putting three once-in-a-lifetime experiences up for grabs themed on the colour of its famous black stout beer.

To mark its 250 years in business, the company is sending one winner into space, another to the depths of the ocean, and a third to an exclusive Black Eyed Peas concert.

The competition is open to adults in 28 countries at its website www.guinness.com until the 250-year anniversary on September 24 – dubbed Arthur's Day.

The Guinness space experience gives one person the chance to become one of the first non-professional astronauts to venture into space with Sir Richard Branson's Virgin Galactic, the world's first commercial spaceline.

After training in New Mexico at the Virgin Galactic's home at Spaceport America, the winner will take a flight through the Earth's atmosphere at almost 2,500mph – three times the speed of sound.

Sitting 68 miles above the Earth's surface, they will experience the feeling of weightlessness before they view Earth from the blackness of space.


No thanks, I have seen what happened to Branson’s balloon flight and his speed boat.

Angus Dei-NHS-THE OTHER SIDE
Posted by Angus Dei at 08:58

A mobile phone means a person can contact the outside world or be contacted on email or sms, seeing they can't use the phone facility. Think about it Angus!
I should know - I am profoundly deaf and I have a blackberry which means I am independant and can contact people or they me.

You cover such a range, Angus. Digital versus FM - I don't know a lot about it. Is one better than the other?

I know that DD, but the guy has cataracts, and his hearing aid batteries were dead, that is why he didn't see or hear the train coming:)

James, I don't think we will have a choice if we still want to listen to BBC radio, none of the FM radios will be able to pick up the signals, and will need to be replaced with DAB digital radios.