Twenty two down......., Wilco and out, snorkelling Numpty, Ebay nasties and Banana sex

It has finally stopped tipping down in ‘Ampshire, we had 60mm of rain yesterday and the garden looks like it has been steamrollered. I blame it on my neighbour who washed his car, the reason he gave was that it was covered with monkey footprints (from Longleat). Yeah right.


James over at nourishing obscurity left a comment yesterday saying that there was no text between pictures for the last couple of days, being a bit dim I presumed he meant that there were gaps between the pictures and the text, which sometimes happens, especially with bitmaps because it is difficult to see the top edge and if I try to narrow the gap I can delete the pic which is really annoying if it is not the first one. My apologies to James.


Anyone else had problems viewing the posts? Let me know.

You just can't please some people 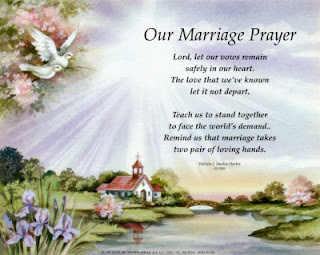 A 107-year-old Malaysian woman is looking for her 23rd husband - because she fears her marriage is on the rocks.

But now she fears her husband will not return home after completing treatment for drug addiction in Kuala Lumpur.

She told reporters she felt "lonely" without her husband, ahead of the Muslim feast at the end of Ramadan.

Wook Kundor, of Kuala Terengganu state, plans to visit her husband, Muhammad Noor Che Musa, if her neighbours would drive her to the capital.

She said she would re-consider her plans if the 37-year-old told her he still had feelings for her.
Speaking to The Star newspaper in Malaysia she said: "Lately, there is this kind of insecurity in me.

"I realise I am an aged woman... My intention to re-marry is to fill my forlornness, and nothing more than that."

Her husband, who used to be her lodger, had previously said it was "God's will" that he fell in love with her.

Well she must have something going for her, even if it is all wrinkly. 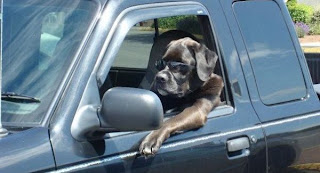 From NZ:
A New Zealand dog had a lucky escape after taking its owner's Ute for a drive and crashing into a cafe.
It seems Wilco, a Staffordshire-ridgeback cross, got tired of waiting for his owner, who had ducked into a shop in the South Island town of Cromwell.
Wilco pushed the gear stick into drive and the vehicle rolled about 15 metres before crashing into the Fusee Rouge Cafe.
Cafe owner Jacynda Wallace said it was a big shock.
"The dog was in the truck and the man was on the phone ringing his insurance company," she said.
"Everyone is talking about it. Lots of people from Auckland are talking about it and TV One, TV3 have rung me."
Ms Wallace says the front doors of her cafe will have to be replaced but she might name a sandwich after Wilco.

Never mind that they should take his license away.
Underwater Numpty 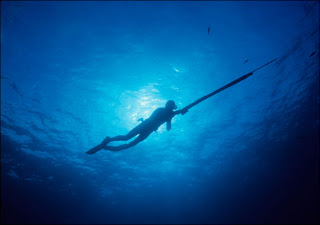 Greg Robertson, 25, was spear fishing off the coast near Brisbane with his girlfriend when a wave knocked the gun out of his hands.
As he rushed over rocks to retrieve it another wave pushed Mr Robertson onto the weapon, which fired into his thigh, just missing his genitals.
His friend Casey Jensen rushed to his aid and unscrewed the spear from the gun but was unable to pull the barbed point out of his leg, thedaily.com.au reports.
The spear was lodged a few centimeters into the man's pelvic area, with a 10cm section still sticking out. Rescuers said it was "a pretty gory sight".
"We joked about it: we told them not to spear themselves and mistake themselves for a fish and then it actually happened," he said.
A Brisbane man on holiday in the area saw the incident occur and called the emergency services.
"He seemed to be ok, but he was in shock — he was very close to being in real trouble," he said.
A rescue helicopter winched Mr Robertson to safety in front of hundreds of onlookers and he had surgery to remove the spear last night.
Spear fishing is a popular activity in Australia. Snorkelers equipped with spearguns are allowed to hunt and collect certain types of fish and crustaceans off the coast.

Nearly a no nuts Numpty.
Any bids? 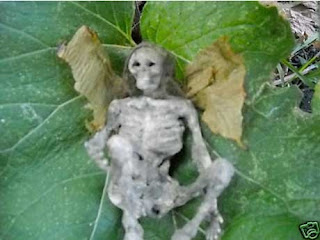 EBay are not renowned for keeping an eye on the items on their site, and here are ten of the oddest lots, click the link above the pic for full descriptions and pictures.
1. A dead fairy
2. A dismembered female Halloween prop
3. A petrified frog (not scared but turned to stone)
4. A silicon rubber tapeless foreskin tugger
5. A pint of sundried California bees
6. A chocolate chip cookie with a face in it
7. Medicinal nipple hair
8. A mutant cucumber
9. Yelling service
10. An Imac computer cage for hamsters

Whatever floats your boat I suppose. 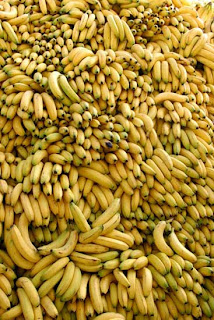 Police in Papua New Guinea police are hunting the leader of a sex cult who promised villagers a bumper banana harvest if they had sex in public.
The man and his followers fled naked into the wilderness when police tried to arrest them at the weekend, the Post Courier newspaper reported.
It said the villagers in Morobe province, about 120 miles north of the capital Port Moresby, had been promised their banana harvest would increase 10-fold every time they had sex in public.
It said the cult leader was wanted for a range of alleged offences over the past four months, including threatening people and illegal sexual activity.
Inspector Adam Busil said officers had surrounded the man's hut early on Saturday but he refused to come out. The suspect then made a dash for freedom with about seven naked followers.
"He used his two wives as a human shield to avoid being shot at by the policemen," he said.
"They were called on to surrender but they refused."
He said extra officers were being called in to track down the members of the group.

There’s one born every minute, or in this case quite a lot.

No, I actually meant that between the pics there was no text at all. Maybe this was a problem of my computer.

There was not text on my PC either James.

I have reposted it, can you see it now:)