An extra hour in bed, yeah right! Problem is no one told my bleeding cat that the clocks went back and she woke me up at 5 am for her food.

There I was Bribbling away when she let loose, volume akin to Concorde taking off with the afterburners on full, this is the only cat that has been evicted from the vets for noise.

Being totally deaf she doesn’t know the neurological damage that she causes to the unwary with her screams and my ear was only four inches away from the font of all noise. 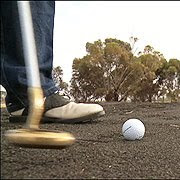 The Nullarbor Links will test the patience and stamina of everyone who plays it - because it stretches along 850 miles between Ceduna and Kalgoorlie.

The holes are positioned near petrol stations and motels along the mostly deserted and featureless highway.

Few people bother to stop unless they have to; tourism officials hope there are now 18 more reasons to do so.
But if you like to play your golf on carefully-manicured greens and pristine fairways, this course is not for you.

There is hardly any grass, just dirt and stones. The greens and tees are artificial, and some aren't even green. Because of a lack of water for irrigation, some putting surfaces are made from sand mixed with diesel.

He says the world is full of courses like that, but his is different.

"I think people are looking for an adventure, and an experience," he said.

"This is the real Australia, it really is. They'll never play anything like this anywhere in the world."

And as they've had 1.7 million hits on their website, it would suggest that there's been huge international interest in the new course.

You have to be really desperate to get away from the wife to play this one. 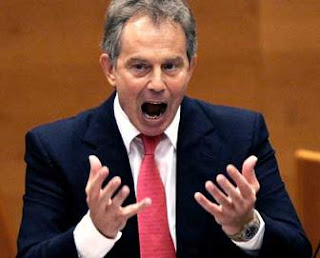 Labour ministers deliberately encouraged mass immigration to diversify Britain over the past decade, a former Downing Street adviser has claimed.

Andrew Neather said the mass influx of migrant workers seen in recent years was not the result of a mistake or miscalculation but rather a policy the party preferred not to reveal to its core voters.

He said the strategy was intended to fill gaps in the labour market and make the UK more multicultural, at the same time as scoring political points against the Opposition.

Mr Neather worked as a speechwriter for Tony Blair and in the Home Office for Jack Straw and David Blunkett.

"Mass migration was the way that the Government was going to make the UK truly multicultural," he wrote in the London Evening Standard.

"I remember coming away from some discussions with the clear sense that the policy was intended - even if it wasn't its main purpose - to rub the Right's nose in diversity and render their arguments out of date."

On the BBC's Question Time programme, Jack Straw faced questions about whether the policy has played a part in the rise in popularity of the BNP.

Still when “Tone” is president of the EU maybe he will reverse it. 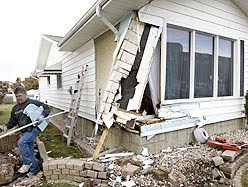 Over the pond and up a bit: A northside home was damaged for the second time in three years by a vehicle early yesterday when a woman in her 70s lost control of her truck and slammed into the house.

Police believe she suffered a "medical event" before the accident, a police spokesman said.

The woman was driving near 94 Street and 142 Avenue around 9 a.m. when she skidded across two front lawns and ploughed into the living room of Don and Dorene Whitworths' house.

The accident ripped off an entire corner of the home, leaving a gaping 2.5-metre tall hole.

The woman was taken to hospital with minor injuries, police say.

As startling as it might have been to wake up to a "kaboom," the most shocking part of the accident was it wasn't the first time it happened, said Don.

Around three years ago a woman trying to park her vehicle alongside the street backed into a decorative planter attached to the front of the house.

This time around, said Don, "I thought a bomb hit the house. Everything shook."

The impact rattled the home so hard, the attic door flew open, spewing insulation, he added.

The couple was still in bed after an early morning trip to the airport to drop off their son when the woman hit their home.

Don immediately shot out of bed to get his shoes and go outside to see what happened while Dorene went to investigate in the living room.


"The wind was blowing through the curtains and I heard a truck motor," Dorene said, while a construction crew filed in and out of the living room.

Meanwhile, Don was outside where he saw the woman trapped in the truck.

He ran to get some wire cutters, fearing the overturned and still-running vehicle would spark a fire.

But by the time he returned to the truck, ambulances and police had arrived on scene.

"They had to get the roof off the truck to get the woman out," he said.

The couple are the only people who have ever lived in the house, which was built around 1970. After the remnants of the first accident took months to repair, they worried this time around it would be the same. 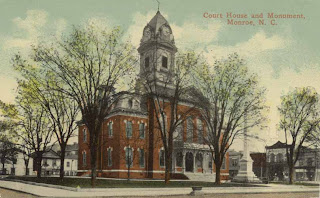 Also from over the pond: This South Carolina Numptys good intentions defy belief.

After the man's uncle died, he discovered that his relative had collected explosive materials including grenades, dynamite and black powder.

The man, fearing that the materials might fall into the wrong hands (his), drove 80 miles to his uncle's house and loaded his truck with some of the items. Then he drove back to his home county of Union on Wednesday to give the materials to police.

Union County Sheriff David Taylor says the man brought the items to him because the two know each other.

Taylor says deputies closed off several streets and called the bomb squad when they learned about the items. The materials were later destroyed.

No ‘charges’ are expected.

Thanks for rubbing it in OZ 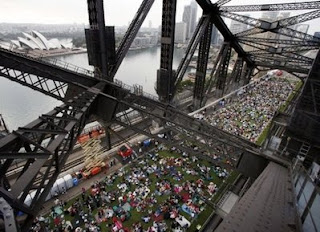 Thousands sat down to breakfast on the Sydney Harbour Bridge on Sunday after the iconic structure was closed to traffic and carpeted with grass for the first time for a giant picnic.

About 6,000 early risers were on the steel bridge from 6:30 am to take part in the two-hour event designed to showcase Sydney's best food and outdoor lifestyle.

As accordion players and trumpeters provided the background music, those who had won tickets to the picnic in a random lottery munched on fruit, pastries, muesli, yoghurt, and the staple Australian breakfast spread Vegemite.

"It's amazing to see the bridge in this perspective," said Sydneysider Don Fuchs of the structure which is used by about 100,000 cars daily.

"Usually you sit in the car, you cross it, and that's it."

"It was beautiful," said Linda Curnow who attended the picnic with her family. "The grass was so thick it was like being in your back yard."

About 45,000 people applied for tickets to the breakfast for which people brought their own food but were able to taste samples from some of the state's best producers.

"I don't think we were ever doubtful of the success of this event today," a government spokesman told AFP. "It was a unique world first for this iconic attraction. This type of event typifies the Australian personality."

Organisers are planning to use about 40 percent of the grass on Sydney parks.

I was going to go but this extra hour thing made it impossible, and my breakfast would probably be cold by the time I got there.

Like the Eiffel Tower, the SHB is still an amazing structure.

That is one unlucky house to be living in!