Out of energy: Still in the nineties: White Tips of St Ives: Chinese Tin man: Numpty Knight: and a steaming idiot.

Splendiferous start to the day at the Castle this morn, sunny, warm and calm, the kitchen is empty of any sort of ailing difference machines, the strawberries are ripe for the picking and his majesty has discovered the garden.
My lovely young lady is due at nine of the am to shear what is left of my locks, the Honda has been washed clean by the exuberant sky water and I don’t need to schlep around with the watering can.
Does it get any better than this......
And my friend Bernard over at The Organ Grinders Monkey in response to my request for a free classic car.
Sent me this:
Found these for you.
Not sure if they are what you require, but they might have a few miles left in them?

David Cameron: Mazda MX5.
Slick, snappy U-turns, doesn't sell well in the North
Nick Clegg: DeLorean DMC.
Once wanted by all. Now, loved by only a handful of collectors
Chris Huhne: Bugatti Veyron.
Top speed 253mph, fast enough to dodge M11 cameras
Ed Miliband: Toyota Prius.
Very right-on, and not bad-looking. But no acceleration, or drive. At its best when parked.
Yvette Cooper: Golf GTI.
Looks bland, but isn't. Manoeuvrable, durable, loads of horsepower. Don't bet against her".
Ed Balls: Lamborghini Cheetah:
Big, horrible to look at, wastes fuel likes it's going out of fashion, clunky and able to bulldoze its way through anything in its path. Unloved.
John Prescott- a LADA.
Out of date, bulky, cannot turn easily, wasteful but surprisingly attractive to some, simple to understand because of their simplicity and always seem to be around
Says it all I think.

According to “energiser” Chris Huhne. 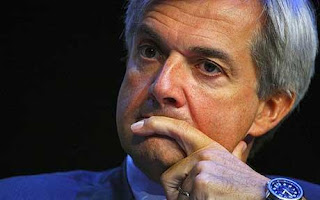 Consumers should vote with their feet and switch to a different supplier if their power company raises its charges.
Mr Huhne said people did not have to take price increases "lying down".
He urged people to hit firms "where it hurts" by finding a cheaper supplier.
Yeah right; another tosser living in La-la land, it takes quite a few weeks to switch, and by the time the deal is done the supplier you have switched to ups its prices.
Apparently the TUC has found out that 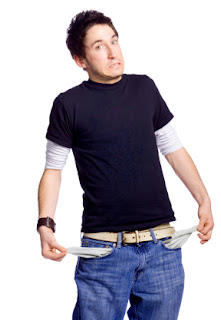 Low and middle income earners have been in a livelihood crisis for three decades.
Over the last 30 years low and median incomes rose by 27 and 56% respectively despite the UK economy doubling in size.
The Trades Union Congress (TUC) report, Britain's Livelihood Crisis, has claimed that only an unsustainable rise in personal debt held off the effects of the crisis before the recession struck.
Report author Stewart Lansley said: "Up to a third of those of working age are facing a deepening livelihood crisis, one which has brought weakening job opportunities, low living standards and a range of new economic uncertainties compared with the immediate post-war decades.
No shit......
Dahn in the Tourist Tax County 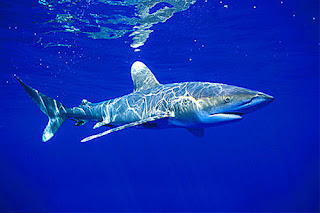 A fisherman out on the water has said he was nearly toppled from his wooden boat by a man eating shark.
The angler was out looking for mackerel a mile off the coast of St Ives, when suddenly his boat was rammed by the 7ft fish.
As it swam away – passing another boat – he identified it as an oceanic white tip, a shark famed for feeding frenzies around shipwrecks and plane crashes.
While the prospect of this killing machine swimming around our coast sounds terrifying, before any one flees the water, experts are already pouring cold water on the reports.
They claim the shark, normally found in tropical waters, has never been seen this far north – and even if it has entered our waters it will be virtually comatose by the cold.
Nevertheless the fisherman are adamant.
Why would a man eat a shark a mile out into the sea?
East lots and lots 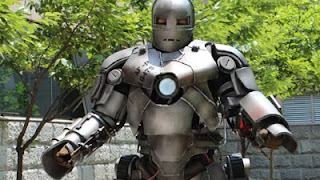 A Chinese man stunned his colleagues by walking into the company wearing a set of Iron Man armour he made at home, in Shanghai.
Wang Kang, 25, who works for a leading telecoms company, donned the 50kg Iron Man armour around his workplace before walking out to the public area for a demonstration.

"No colleagues knew my mission, and some of them froze as I approached, and some were even screaming," explained Wang

Wang walked along the company corridors and visited different departments. Each time he visited an office, there would be a larger crowd following him around.
Wang revealed that since wearing the Iron Man armour, women have even sent him messages, asking to be his girlfriend. Wang beamed: "They said I am a happy and creative man, and they wanted to know me."
The main material of the armour is EVA foam, which is glued onto an aluminium frame. Soldering irons were used to make the effect of rough iron plate edges. The whole armour was painted the colour of aged iron and took three months in total to create.

After the frame and the glued 'iron' plates were completed, Wang then installed wires, pipes and circuits into the impressive armour.
Whatever floats your boat I suppose?
West a fair amount to the land of plumbers 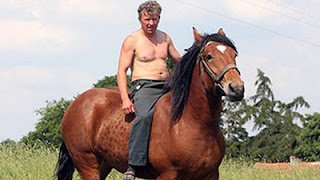 A would-be knight who tried to woo a maiden by riding into her home on a horse is facing five years behind bars for aggravated breaking and entry.
Lovelorn Jan Rudnicki, 40, hatched the scheme to bowl over divorcee Gosia Domoslawska after a night's drinking down his local bar in Jarnoltowka, Poland.

But terrified Gosia, 36, dialled 999 when her drunken suitor - stripped to the waist - galloped up her garden path and smashed his way through the front door like a battering ram.

"He's a loon. I was at home watching TV with my daughter when I heard this deafening crash and suddenly this half-naked man on a horse appeared in my front room," she said.

"I never fancied him before and I certainly don't now. If this was supposed to win my heart he must be seriously off his rocker," added Gosia.
You think....
And finally;
West even more and up a touch 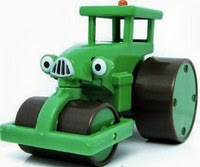 A man who allegedly took a steamroller on a joyride in Sudbury Ontario had to be rushed to hospital after he became pinned beneath the machinery.
Police were called around 3:20 a.m. Sunday after received reports a man's ankle was under a steamroller and he was pinned. He was taken to hospital with a serious leg injury.
Police said the man had allegedly taken the steamroller for a joyride and lost control, the steamroller tipping over on him.
Police said alcohol was a factor.
The man is facing charges of theft and impaired driving. An investigation is underway.
Well at least it was a rollover for him this week.
That’s it: I’m orf to check out my asteroids.
And today’s thought: On the keyboard of life, always keep one finger on the Escape key.
Angus
Posted by Angus Dei at 07:57

"My lovely young lady is due at nine of the am to shear what is left of my locks,"

Bernard the, ....always obliging and always the ever grateful. (for a ref).

A man who allegedly took a steamroller on a joyride in Sudbury Ontario had to be rushed to hospital after he became pinned beneath the machinery.

"Balance" isn't the word I would use Bernard the car salesman, more like teetering on the edge:)

You are most welcome for the mention-my good deed for the day.


All and Sundry would be blank without them James:)