Much lack of warm, a whimsy of atmospheric movement, even less skywater and Dawns crack is quite wide at the Castle this morn.

The temperature has finally dropped below 30c (or 86 in C of  E) which means that poor old Angus can finally operate within “normal” parameters and his Maj can move about without collapsing in a panting heap.

The Brexit bollocks is still dragging its feet 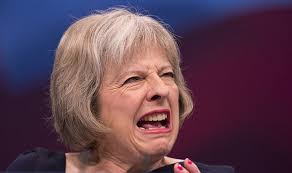 Theoretically, there is nothing to stop a British Government unilaterally withdrawing from the EU by simply repealing the 1972 European Communities Act. Article 50 compels only the EU to seek a negotiation, not the withdrawing member state.

So come on May get us out and “negotiate” later, after all Blighty managed to survive for many-many years before the EU and it will survive after. 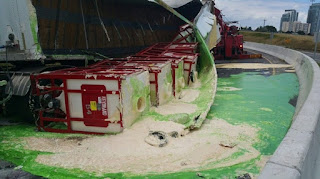 Police have charged a 52-year-old Brampton, Ont., man with careless driving after a transport truck carrying large vats of salad dressing rolled over on a busy Toronto highway while making a turn.

The single-vehicle crash caused a flood of thick neon green and white sludge to spill over the road as the truck lay on its side.

Ontario Provincial Police Sgt. Kerry Schmidt says the incident took place at about 11 a.m. on Tuesday and left the driver of the vehicle with just a few cuts and scrapes.

He says the truck was "fully loaded" with bulk loads of salad dressing, mayonnaise and other food products.

Crews spent the whole afternoon at the scene of the crash (at the Don Valley Parkway northbound ramp to Highway 401 West) cleaning up the mess.

Right oodles of KMs and dahn a bit 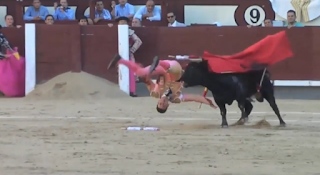 A Spanish bullfighter is seriously ill in hospital after being gored three times in a horrific onslaught which saw a bull’s horn pierce his lung.

The incident comes a fortnight after Victor Barrio was killed in the ring.
Pablo Belando, 26, was “very serious” after being gored in his chest, leg and buttocks in Madrid’s famous Las Ventas bullring.

Right even more units of length and dahn a lot 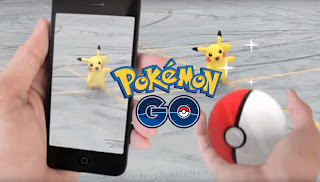 JAKARTA, Indonesia -- Indonesian police say they detained a Frenchman who trespassed on a military base while playing the augmented reality game Pokemon Go.

A spokesman for West Java police said that Romain Pierre, 27, was caught at a checkpoint on Monday evening after initially running away when challenged by security guards at the military complex in Cirebon.

Pierre was released a few hours later because it became apparent "he unintentionally entered the complex as he was hunting Pokemon while jogging," the police spokesman, Col. Yusri Yunus, said Tuesday.

Still in the same area-ish

BANGKOK -- Election officials in northern Thailand think they can buy off a gang of monkey vandals with fresh fruit and vegetables, after about 100 macaques tore up voter lists publicly posted ahead of next month's referendum on a proposed constitution.

District official Surachai Maneeprakorn said a large population of the monkeys lives behind the Buddhist temple where the polling station they raided Sunday is set up in an open hall.

"For some reason they were being very naughty and started tearing up the lists," he said.

Local officials brought the animals food Monday, and hope that if that does not deter them, then newly installed sliding glass doors protecting the reposted lists might, said Phichit district election official Prayoon Jakkraphatcharakul.

Back over to what’s left of the EU 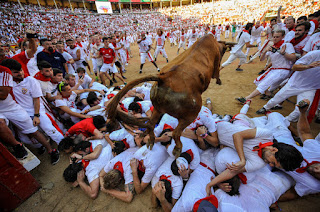 Six foreigners, including three Americans, were among seven people gored in a second running of thebulls at Pamplona’s San Fermin festival, according to the Navarra regional government.

The regional government said nine others were taken to city hospitals for injuries from the run. Several of the six bulls used in the event became separated from the pack moments into the 8am run and began charging people in their way.

That’s it: I’m orf to get my hips replaced

Delighted to see this back again. A chortling read.

Hi James, I must be in the mood again:)

You do understand that people need these irreverent musings, even once a week would do.