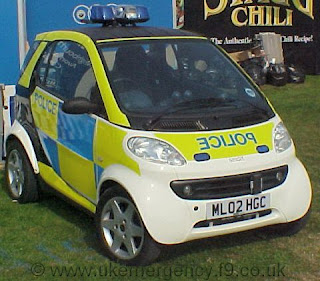 I am late posting today because it rained yesterday and BT, crap that it is, is unable to maintain my internet connection (again), and Microsoft is SHIT, because it managed to download an “update” that has ballsed up my logon, so that I can only access the “administrator” user instead of my own logon, and won’t let me delete the “new” administrator logon it created just to annoy, which it has.

Up first is the news on those ugly little smart cars with a 12ft mast topped with a “zoom” camera in Manchester to catch those of us that driving “while distracted” by doing things such as tuning the radio, eating, or driving “without due care and attention” BBC NEWS.

I agree that speeding or using a mobile phone while driving or not wearing a seatbelt is dangerous and should be “punished” but what next-picking your nose at a traffic light, or perhaps talking to a passenger or maybe screaming at the kids fighting in the back will be considered a crime by the SS Traffic Police, we already have more than enough speed cameras, and traffic patrols are there to nick the “phoners” and seat belt avoiders, so why are the Police, who are there to catch criminals and protect us from danger using zoom cameras to see what we do in the privacy of our cars.

And the worst bit is that you are not told about it at the time, but the fine comes through the post.

It seems the time is upon us when the final private space we have-our vehicles is no longer sacrosanct, the only way to avoid being fined is to not have any passengers, tune the radio before we set out, don’t put the kids in the cars, have something to eat and drink before getting into our cars blow your nose before you set out and don’t take your eyes off the road to wonder what those ugly little smart cars with a 12 ft mast on top with a zoom camera are doing.


From the The Register The BBC has been fined £150,000 over the Manuelgate scandal, Ofcom has confirmed.

On 18 October last year, Radio 2 broadcast a show featuring Russell Brand and Jonathan Ross in which they rang actor Andrew Sachs and left messages on his ansafone which boasted that Brand had slept with the Fawlty Towers vet's granddaughter, Georgina Baillie.

On 18 October last year, Radio 2 broadcast a show featuring Russell Brand and Jonathan Ross in which they rang actor Andrew Sachs and left messages on his ansafone which boasted that Brand had slept with the Fawlty Towers vet's granddaughter, Georgina Baillie.

The full adjudication can be found here (pdf)


Errr, excuse me but who has been fined? The money comes from our license fee, why not fine Brand and “Woss” they are the cause of it.

From the The Sun Googles street view is causing more than concerns about privacy,

A FLEET of UFOs in formation has been photographed — on Google.

The nine silver spheres hover above a row of shops, including Coral bookies, on the internet giant’s new Street View service.

Faye said: “I was checking out the road to see if I could spot my mates. I thought it looked very strange and zoomed in.


Another tale about BT my favourite telecom company- The Register NHS Connecting for Health has agreed that BT will take responsibility for the Cerner Millennium installations at eight acute trusts in the south of England.

The NHS National Programme for IT has lacked a local service provider in the south of England since CfH fired Fujitsu in May 2008.

"BT can confirm it has signed a contract to take over the running of IT systems at eight acute trusts in the south of England as part of its NHS national programme work," said the company.

"This takeover was not unexpected," said Victor Almeida, a senior analyst at Kable. "BT is currently implementing a version of Cerner in the London cluster and thus is best positioned to run the sites.

"The big question is what will happen to the remaining trusts in the South, "he added. "Will they opt for BT, will they resort to Lorenzo software provided by the CSC Alliance in the North, where there are several out-of-cluster agreements within the NPfIT, or will they wait for offers from new software suppliers?"

Who cares? If it rains it won’t work anyway.

An ongoing case about a boy said to have fathered a child at 12 years of age has highlighted the issue.

Reporting on that case has been restricted but foreign news outlets have carried stories about it, with versions of those stories appearing on websites accessible from the UK.

Some bloggers have picked up the stories and may be within their rights to publish while national newspapers cannot. The court order imposing the reporting restrictions says that it only applies to people who know about the restriction.

There is no central database of reporting restrictions, so while newspapers are informed of restrictions, bloggers generally are not, opening a legal loophole for their possible publishing of restricted information.


You didn’t read it did you? Good because ignorance is bliss, or blogs.

"Never attribute to malice that which can be adequately explained by stupidity." Hanlon’s razor

NHS-THE OTHER SIDE
Posted by Angus Dei at 10:21 1 comments