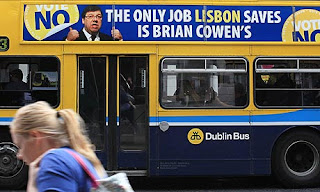 Can’t seem to get going today, personally I blame the Government, and talking of the same what is going on with this Lisbon treaty thing?

Is this the new kind of politics where if the “powers that be” don’t get the result they want they have another vote?

Will it happen here after the next election when the losers decide that we should have a second election because they didn’t like the outcome of the first?

Europe is embedded in our lives, do we need more interference, more inane laws, maybe we should change the name of the UK to the EUK, which is what our lives will be like if the Lisbon treaty is ratified. 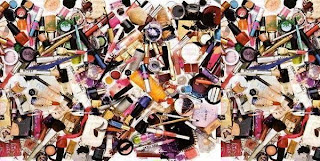 Nearly half a million road accidents a year are caused by women drivers applying make-up behind the wheel, a new survey discloses.
Around on fifth of female motorists confess they have touched up their mascara on the move – equivalent to 2.7 million of Britain's 15 million women drivers.
Three per cent admitted causing a collision when distracted by applying cosmetics.
The poll of 4,000 women drivers by women's motor insurer Diamond comes a year after the introduction of a new offence of causing death by careless driving which carries a prison sentence of up to two years.
Young women, aged between 17 and 21, were found to be the most likely to put beauty before safety and most liable to crash their car as a result.
Twenty-seven per cent confessed to putting on make-up and nine per cent of those aged 18 or younger have had a crash while doing so – three times the average.

Should have used sat nav 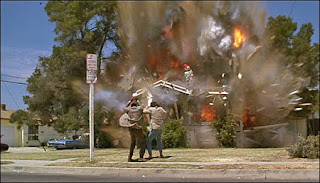 A group of elite SAS-style commandos has apologised after blowing up the wrong house in a training exercise.
The squad - from Sweden's K3 cavalry division - were supposed to attack an unoccupied home bought by the military for attack drills.
Instead they launched a terrifying night assault on another home 200 yards away from their target in Rojdafors, Sweden.
"They were extremely lucky that the couple who own the property were out or they could have been killed," said one neighbour.
The troops blew out both front and back doors and every single window before they realised their mistake.
The K3 unit is considered the most deadly strike force in Sweden and likes to compare itself to the SAS and America's SEALs.
An army spokesman said: "We've already cleaned up after ourselves and we have, of course, contacted the owner. There's no hard feelings between us."

The IgNobels - a play on the name of the Nobel prizes awarded every October from Stockholm and Oslo - are given out by the Harvard-based humour magazine Annals of Improbable Research.
Prizes also went to Zimbabwe for issuing banknotes that ranged in value from one Zimbabwean cent to 100 trillion Zimbabwean dollars, to Mexican scientists who made diamonds out of tequila, and to the leaders of four Icelandic banks that suffered spectacular collapses.
The Public Health prize went to Elena Bodnar of Hinsdale, Illinois and colleagues who designed and patented a bra that can be quickly converted into a pair of gas masks, one for the brassiere wearer and one to be given to some needy bystander.
Ireland's police won the literature prize for writing more than 50 traffic tickets to a frequent visitor and speeder named Prawo Jazdy. In Polish, this means "driver's licence".
Pathologist Stephan Bolliger and colleagues at the University of Bern in Switzerland won for a study they did to determine whether an empty beer bottle does more or less damage to the human skull than a full one in a bar fight.
Donald Unger of California was honoured for a lifelong experiment in which he cracked the knuckles of his left hand but never his right for more than 60 years to prove that cracking your knuckles does not cause arthritis.
Other winners included farmers who showed that naming your cows makes them give more milk, researchers who used panda droppings to break down household trash, and a scientist who calculated why pregnant women do not fall over.

Shouldn’t the magazine be called “The anals of Improbable Research.”? 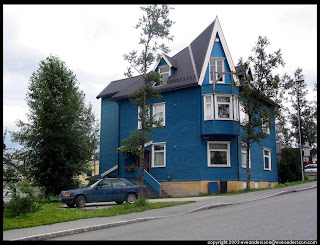 No it’s true, People living in blue houses are more successful than those living in homes painted any other colour, according to a new survey.
The average professional living in a blue-painted house earns an impressive £38,000-a year and drives an Audi TT to work.
They take 27 days annual leave a year and treat themselves to at least two holidays abroad to exotic locations such as Barbados or the Maldives.
The poll, conducted by Sandtex Paints of 3,000 home owners, reveals that 23 per cent of people in blue houses have already worked their way up to Director level at work.
A further 31 per cent are proud to call themselves 'manager' or a job title of similar status.
And most of these professionals have at least three members of staff working beneath them.
Blue home owners will have already achieved two significant promotions to date in their high-flying career.
And if they haven't chosen the legal route, 11 per cent are likely to work in the health service or nine per cent in education.
In addition to maintaining a successful career, people living in a blue house even do well on a personal level.
The average blue homeowner is in a long-term relationship, has two children and four really close friends.
Fourteen per cent use some of their hard earned cash to pay for a cook to help out when guests are round, 11 per cent have a regular cleaner, and eight per cent have a nanny to help with the children.
Whilst a quarter of these people are so busy successfully managing a good career and family life, they always get outside help for DIY.

So if your house isn’t blue, paint it blue and make money. Bollocks is the word that comes to mind.