EU-going out: UK staying in: UK-living it up while staying in: MG-NZ: Dangerous caviar: Polish sobriety upbringing law: and Hanging about in India.

‘Tis warm, sunny, calm and dry at the Castle this morn, already been down to Tesco for stale bread, gruel and pussy food, they were going to close for a week for an “upgrade” because building of the new Morrisons has started, but now it seems that they underestimated the size of the competitor’s store and have decided to postpone until they can decide what to do.
Funny that, they can decide to put the prices up in a millisecond, but when it comes to “proper” decisions they are lost….
The Talk Talk internet connection is still misbehaving, but my new wireless Orange router arrived yestermorn-not long now…
I see that the EU is back in the “news”-again 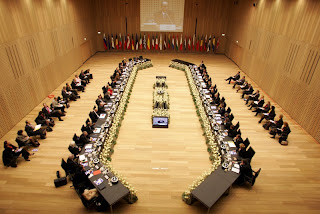 The Torygraph has listed “some of Europe's most notorious projects.”
Click on the link if you can be bothered, but I think most of us are aware that the European Rip Off Super State is draining us dry while the Piss Poor Policies Millionaires Club Coalition is trying to finish us off with their cuts.
And, the UK Border Agency is taking the easy way out it seems. 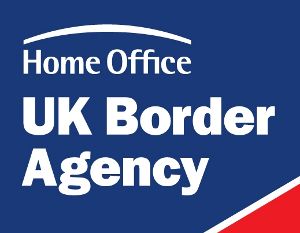 So many asylum seekers have been given leave to remain in the UK that it "amounts to an amnesty", MPs have said.
Out of 403,500 cases dealt with by the UK Border Agency (UKBA), 9% resulted in removal while 40% of applicants - 161,000 - were allowed to stay.
The Home Affairs Committee also said it was "indefensible" that in one in six cases, the UKBA simply had "no idea" what had happened to the applicant.
Immigration Minister Damian Green said there was "absolutely no amnesty".
He said the government had "eliminated" a backlog of 450,000 asylum cases - the scale of which first emerged in 2006.
Mr Green denied there was any amnesty for asylum seekers, saying: "What we've done is get through to the bottom of that huge problem we inherited.
"The main thing is we've now eliminated this backlog from the system so we can now get on with the everyday job that the previous government couldn't because they had that backlog."

Always someone else’s fault with this lot.
And while some of them are waiting to leave Blighty 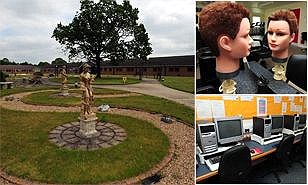 “They” can stay at Morton hall, the Government’s latest centre for foreign detainees awaiting deportation.
The immigration removal centre, in Swinderby, Lincolnshire, will eventually house around 400 men, including former prisoners, illegal immigrants and failed asylum seekers.
New arrivals will be greeted by impressive lawns and extensive gardens, patrolled by a flock of ducks.
They will be housed in private rooms with access to television, games consoles and private washing facilities.
Detainees can sign up to lessons in a well-equipped computer classroom and even hairdressing classes in a mock salon.
And if they fancy some downtime, they can play football in the grounds, take a walk or simply sit on a bench and enjoy the view.

Did you watch that Panorama programme the other night?
Meanwhile, going Dahn Unda and right a bit 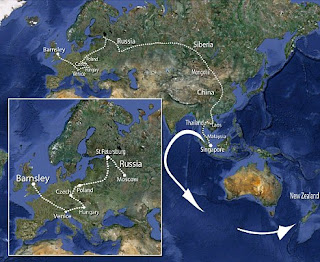 Is a 1948 MG TC, Robert and Lynne Douglas will hop into their beloved convertible to set off on a four month, 30,000 mile trip from Barnsley to New Zealand.
Lynne, 60, said people thought they were 'totally, completely and utterly mad' and readily admitted the car would break down at various points on their mammoth trip.
She said: 'We've had it restored twice and they're really easy to fix.
'If we did a trip like this in a modern car we wouldn't stand a chance if we broke down, whereas with this type of car we can carry basic spares and fix it on the road.
'Mechanics in places like Laos and Cambodia will also know what to do with it - whereas if we turned up with a Mercedes and the central computer had broken, we'd be stuffed.'
Good luck with that….

Dahn upon the Suwannee River 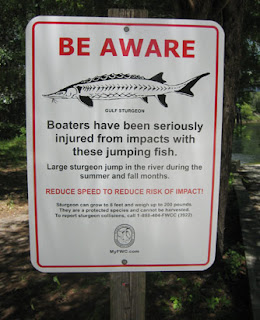 A 25-year-old Florida woman was left with a broken leg after a 75-pound sturgeon jumped into her boat Monday.
Three days earlier, fish and wildlife officers issued a warning about jumping sturgeon.
This is the fifth reported case of sturgeon leaping into boats, according to the Florida Fish and Wildlife Conservation Commission. Three of the cases resulted in injuries to passengers.
On May 14, a woman was injured after a sturgeon hit her on the back and, in the first report of the year, on April 27, another woman was showered in glass when a sturgeon jumped through her boat's windshield.
"I have seen these encounters referred to as 'attacks.' However, these fish are in no way attacking when they jump," said Allen Martin, a fisheries biologist, in a statement.
"They are simply doing what they have been doing for millions of years: jumping. They aren't targeting the boaters."
Gulf sturgeon can exceed lengths of eight-feet and weigh 200 lbs.
"They have five rows of rock-hard scutes along their sides, back and belly. When sturgeon and boaters collide, the results can be devastating," Martin said.
Caviar that comes to you-very handy.
Across to the land of plumbers and painters 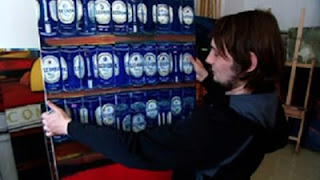 A Polish artist has been warned that he could end up in prison - for painting a supermarket shelf of cans of beer.
Police in Cieszyn seized Michal Oginski's canvas, claiming it breached the country's tough alcohol advertising laws and could encourage young people to take up drinking.
The 25-year-old painter said: "I was told by police that my work corrupts youth and promotes alcoholism. But it's just a painting of some beer cans.
"It's part of a series of paintings depicting supermarket products. I've got others of washing powder and sugar. There's nothing sinister or corrupting about it."
His lawyer Beata Lejman explained: "This is absurd and I've never heard of such a ridiculous law. Are they going to confiscate Rembrandt's pictures which show casks of wine?"
Now officials are waiting for prosecutors to say if Mr Oginski has a case to answer.
Local police Chief Kazmierz Plus said: "I don't make up the law - I just uphold it.
"And this painting breaks the Act of Sobriety Upbringing law, which is universally binding."
What a load of Polish bollocks…
And finally:
Fancy a job in a hot country?

Officials from the prison of Jorhat, 190 miles east of Gauhati, have a shortage of staff willing to send criminals to the gallows and have begun advertising for someone qualified in the ancient role.
The job description appears to be for only the one execution - that of Mahendra Nath Das, who was sentenced to death after committing a gruesome beheading in a busy market.
Judges in India rarely hand down a death sentence, but the court felt Das' crime deserved no less after he ran through the street carrying the bloodied head of Hara Kunt - a rival official in the local transporters' union.
There have only been two hangings in the country over the past 15 years and India's most experienced hangman, Nata Mullick, passed away in 2009 - leaving the role vacant.
So, if you fancy hanging about in India……..
That’s it: I’m orf to send an email to my twin in NGC 6744.
And today’s thought: Which is worse: Ignorance or apathy? Who knows? Who cares?