Cold and clear with a thick layer of white crusty stuff at the Castle this morn, fat teenagers are sliding into the furnace faster than the “new” thingy at CERN and his Maj has discovered the joy of ambush from under the four poster.

Up in the Ministry of what is left of defence 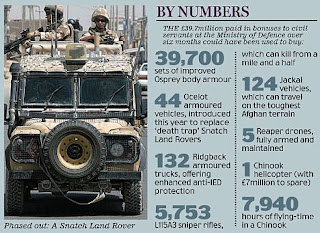 Allegedly Ministry of Defence civil servants have been awarded £40 million in bonuses despite fierce criticism of the department.
One senior civil servant was awarded an £85,831 bonus on top of their six-figure salary - at the same time as members of the armed forces have been subject to a two-year pay freeze and 20,000 are to be made redundant.
The bonuses have been paid since April last year and have seen more than 55,000 officials awarded extra payments for their performance - out of a payroll of 83,000.

Whatever happened to just working for a salary?


Up in West Suffolk 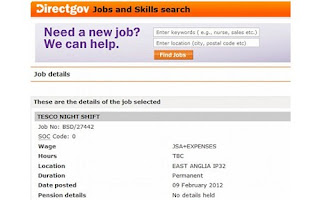 My favourite retailer is looking for a permanent night shift worker in exchange for no wages, the job was offered under the Government's "workfare scheme", which is linked to payment of benefits. The advert said the wages would simply be "jobseeker's allowance and expenses".
A statement from the supermarket chain said: "The advert is a mistake caused by an IT error by Jobcentre Plus and is being rectified.
"It is an advert for work experience with a guaranteed job interview at the end of it as part of a Government-led work experience scheme. We take our responsibility as Britain's biggest private sector employer seriously."
Employment Minister Chris Grayling told the Commons last month that the scheme was working well and was much better value for money for the taxpayer than the last Labour government's Future Jobs Fund.
Jobseekers' allowance is currently paid at £53.45 per week for under-25s, or £67.50 for older staff.

If that is the way Tesco are going it’s about time they reduced their prices... 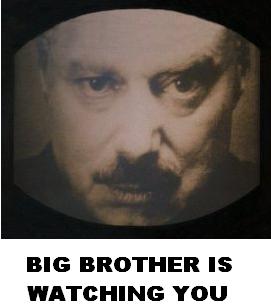 Has come up with yet another gem, Details of every phone call and text message, email traffic and websites visited online are to be stored in a series of vast databases under new Government anti-terror plans.
Landline and mobile phone companies and broadband providers will be ordered to store the data for a year and make it available to the security services under the scheme.
The databases would not record the contents of calls, texts or emails but the numbers or email addresses of who they are sent and received by.
For the first time, the security services will have widespread access to information about who has been communicating with each other on social networking sites such as Facebook.
Direct messages between subscribers to websites such as Twitter would also be stored, as well as communications between players in online video games.
A Home Office spokesman said: “It is vital that police and security services are able to obtain communications data in certain circumstances to investigate serious crime and terrorism and to protect the public.


Left to the warmish bit of the US of A 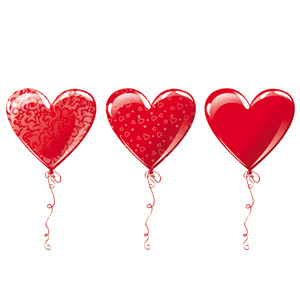 There must be a moral in there somewhere.


Warning-if you are of a sensitive nature DO NOT watch this video.


Back to the State of James Tiberius Kirk 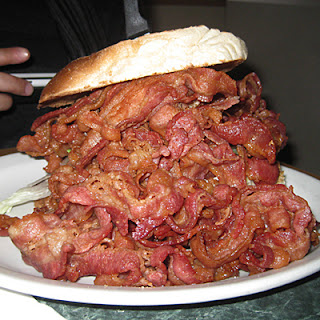 Comes the simple pleasure of gripping a fistful of bacon strips in one hand, and an ice cold beer in the other.
The joy of biting into a giant bacon-infused doughnut ball topped with chocolate and even more bacon.
“Everything about bacon is like Hometown Iowa,” said Becca Swalla, 24, of Urbandale, who attended Saturday’s Blue Ribbon Bacon Festival. “I mean, really, you wouldn’t see this baconfest happening in California. Only in Iowa will people come together to eat a bunch of bacon-covered bacon.”
But even some of the 4,000 attendees acknowledged protesters outside the 165,000-square-foot bacon pleasure palace on the Iowa State Fairgrounds had valid concerns. Too many bacon tacos and cupcakes can’t be good for your health.

Apparently as soon as you have boarded a big silver bird 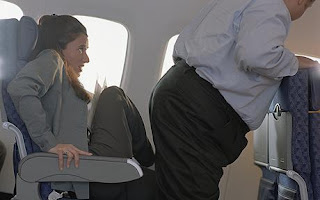 Key elements of Britain’s disability and discrimination laws do not apply, a court ruling could pave the way for the introduction of a “fat tax” for obese fliers, a leading barrister has claimed.
And it could also prevent passengers with a disability from seeking compensation from their airline if they receive unsatisfactory or inconsistent treatment during a flight.
“Judges” decided after considering two cases involving wheelchair users who sued their airlines after they were unable to sit next to their carers on board a flight. Both subsequently suffered “embarrassing” incidents.
But both cases were dismissed after the court ruled that the Montreal Convention, a framework of international rules and regulations on air travel, should take precedence over British law.
The introduction of a “fat tax” has been mooted by Ryanair in the past, following a survey conducted by the airline which suggested around a third of passengers supported it. A number of carriers already insist that obese customers buy an extra seat if they are unable to comfortably fit into one.

Nice to see that even Canada’s law supersedes Blighty’s....

That’s it: I’m orf to muzzle a scientist 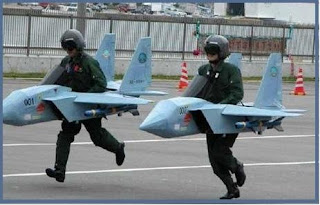 Coldish, dampish, calmish and misty at the Castle this morn, the study is empty of all things broke and beautiful, just got back from Tesco on the stale bread, gruel and pussy food run-still can’t find anything and I am orf to my General Medico to get the right elbow injected with stuff, hope I don’t end up like Popeye.
U-Turn Cam presides over yet another balls up. 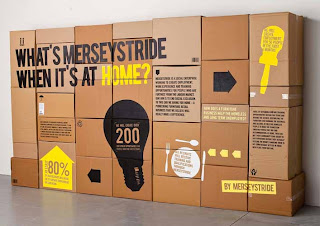 Before the last non-election the PM visited Liverpool and pledged his support for job creation schemes which help those who have "slipped through the cracks" to get back to work.
At the time of his visit, Cameron said: "Any good scheme we will keep, and obviously when it comes to the whole area of getting people back to work, our work programme, which includes mentoring and work training for young people, it will have all those elements."
Among those he praised was MerseySTRIDE, which employs the long-term unemployed to recycle and refurbish furniture and sell it on at competitive prices. MerseySTRIDE's future is now threatened because of lack of funding. 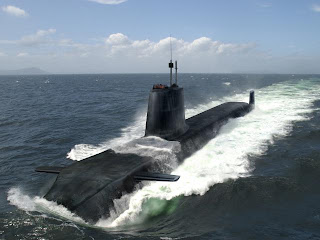 Allegedly the Royal Navy will not have enough hunter-killer submarines to protect Britain after the defence review forced delays to replacements, a report has shown.
The report said decisions by the Strategic Defence and Security Review had led to further cost overruns of £500 million in the defence budget. The decision to delay the batch of seven Astute boats will cost millions extra and leave the Navy without enough boats to defend Britain, maintain the security of the Falkland Islands or protect the Vanguard class submarines which carry the Trident nuclear deterrent as well as carrying out other secret tasks, the report said.
Astute is replacing the ageing Trafalgar hunter killers, the last of which will go out of service in 2022. But the seventh Astute will not enter operational service until two years later, leaving a shortfall of at least one boat. The Navy needs a minimum of seven hunter killer submarines.


I’ve got an old rowboat on the moat if they want to borrow it..... 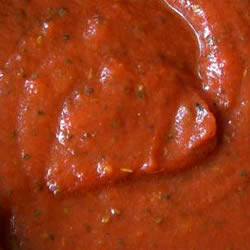 US lawmakers prodded by the frozen food industry have moved to protect schools' ability to count pizza sauce as a vegetable in lunches for students.
In an annual spending bill covering the US Department of Agriculture, which has oversight over subsidized school meals, a joint House-Senate panel voted to prevent the agency from restricting pizza, fries, and starchy vegetables.
A Republican summary of the legislation, which was unveiled Monday and may be approved this week, cheered the defeat of "overly burdensome and costly regulations" and hailed "greater flexibility for local school districts."


Fat American teenagers for the furnace....

Down to bottom bit of the States 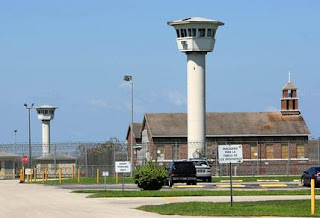 Palm Beach County animal control officers are racing to remove as many as 80 cats from the state-run prison in Belle Glade, fearing they will be left without access to food and water when the facility closes its doors on Dec. 1.
The cats have taken up residence on the prison's grounds, burrowing under fences and living around buildings. They have been fed by prisoners, despite rules that prohibit the practice, officials say.
"They are not supposed to feed them, but they do," said Paula Bryant, a spokeswoman with the state's Department of Correction.
The state announced it was planning to close the 1,000-inmate prison this year, and the Department of Corrections has slowly been moving prisoners to other facilities across the state. As of Monday, there were more cats than prisoners. Officials said there were just 69 inmates left.

Back to right-nearly as far as Blighty 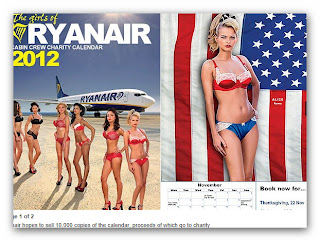 Ryanair’s cabin crew have stripped off for the airline’s fifth annual charity calendar.
Proceeds from “The Girls of Ryanair” calendar, which features scantily-clad female flight attendants, will go to DEBRA, which provides support for patients suffering from epidermolysis bullosa (EB), a genetic skin condition.

The charity was chosen from nearly 400 applicants, and Ryanair said it hopes to raise around £85,000.

The calendar costs £8.50 and can be purchased on board Ryanair flights, from DEBRA’s charity shops in Spain and Ireland, or on the airline’s website (www.ryanair.com).

Good cause, snag is you won’t be able to have a look at it in the toilets. 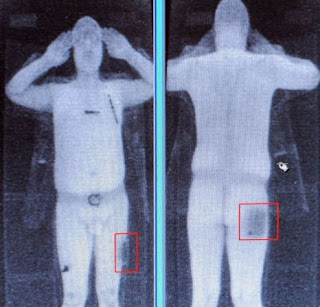 X-ray body scanners at airports have been banned by Brussels amid fears they could cause cancer.

The devices, widely criticised because they make passengers who go through them appear naked, emit low doses of radiation.
The EU has now told member states not to install them until a scientific assessment of the risks has been carried out.
Manchester airport, which has 16 of the £80,000 machines and bars anyone refusing a scan from boarding a flight, has been told it can continue using them for another year.


So they haven’t been banned then....

And today’s thought: There is an art to flying. The knack lies in learning how to throw yourself at the ground and miss.