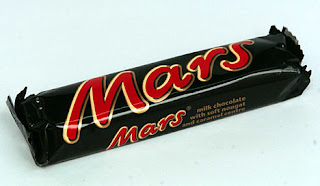 Real life has impinged again today, I have to go to the dentist, my fault, I did something I shouldn’t have and am now paying the piper.

You probably don’t want to know but I am going to tell you anyway, I was down the local smash and grab (Tesco) and as you are probably aware they keep shifting stuff about, well I was looking for something and strayed into the “confectionary” aisle, a place I never visit, and out of the corner of my eye I saw-a Mars Bar, these used to be a favourite of Mrs A and myself.

We would eat them after putting them in the freezer for a couple of minutes so that they were hard (I know), anyway I succumbed and bought one. I hear some people like them deep fried, whatever floats your boat I suppose.

Anyway I got home, put it in the freezer and forgot about it, several hours later I “remembered” it and left it on the worktop for a while to thaw, took off the wrapper and began to devour, the first bite told me it was still too hard but that didn’t stop me, took another bite and-crack!

Very carefully removed said Mars Bar from gob and imbedded in it was a tooth, luckily it was a cap or a crown or something technical, the “tooth” was armed with a spike of metal about a quarter of an inch long ( bugger “metrics”).

So there you are, Mars Bars are bad for your teeth, at least when they are frozen.

So apart from this mishmash of mindless rambling, no post on here or “Politico” or “NHS-The Other Side” today, or at least this morning.

It will probably turn out to be the most expensive Mars bar in the world.

“Life...is like a grapefruit. It's orange and squishy , and has a few pips in it, and some folks have half a one for breakfast.” Douglas Adams