Posting this today because I won't be around on Sunday.
We are now well beyond “first cars” but we were faithful to Triumph. 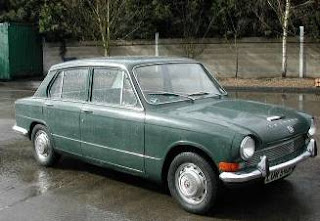 Our next car once the Vitesse had gone was the Triumph 1300 FWD, a four-door saloon that was very well equipped and comfortable.

The 1300 was front wheel drive, Triumphs first, and the engine was “fore and aft” with the gearbox under the engine, not transverse, as in the Leyland cars.

This layout provided advantages because the engine was very easy to work on, but strangely it was the only FWD that Triumph ever produced, they did come up with an updated version but it was never produced.
Because it was such an ugly bugger. 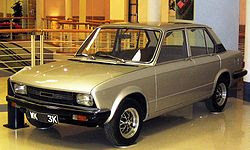 We had her for a while still doing the “Sunday Run” until one day we were in North Camp, I was turning left off the main road and was braking, unfortunately the lorry driver behind us was watching a young lady on the other side of the road and managed to smash into the rear of our Triumph.

Because it had no headrests the next week or so was spent in a neck collar, with whiplash.

I never brought another car without headrests. 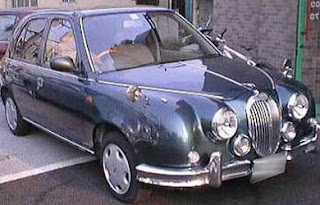 A friend of ours had just bought a MK2 Jag, he went for the 3.8 manual, shame really because the 3.4 was almost as fast but the handling was much better.

I like the MK2 it is very pretty and comfortable, but I found it a bit cramped; there wasn’t much elbowroom. Another problem was the lack of space around the engine, and yet another problem was the brakes, they worked OK, but when he was showing me the engine he managed to crimp a small tube. We went out on a test drive and there were no brakes! The tube he crimped was the vacuum feed to the “brake booster”.

So we decided against a jag, and instead bought a Honda Accord 1.8, 3 doors, which we named the space shuttle. 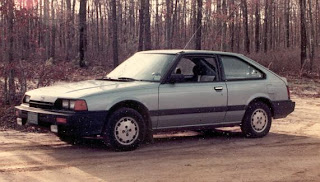 Because the interior was full of switches, buttons and dials, a real “boy toy”, it was ultra comfortable and reliable. But had the "Honda Rot" as they all did in those days, the most dangerous "rot" was the feed tube from the petrol cap to the tank. You would pull into the garage to fill up and end up standing in a gallon of petrol.

And that really is the end of “old cars” we stuck with Hondas until today, mind you my Honda civic is 18 years old, I just don’t get on with new cars. 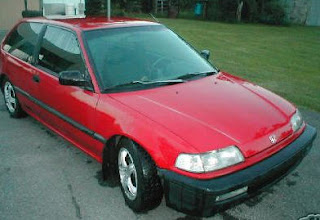 We had many happy years touring around and visiting our favourite, and new places, still making friends and enjoying our old cars.
Driving was a pleasure then, no road rage and not many jams, much more civilised, not like now, but as they say that is the price of progress.
One more thing, pop over to http://ritaismypal.blogspot.com/ and leave a comment for our Rita.
Angus
Posted by Angus Dei at 10:23 2 comments

The Herald had gone to the great parts department in the sky and we had our Vitesse. 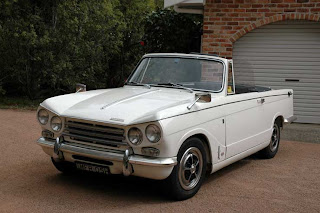 The Vitesse was a totally different beast, it had a 2 litre straight six engine, the prop shaft, diff and rear drive shafts had been beefed up, new bonnet with double headlights and an overdrive (fifth gear). The heater was improved and gave out the equivalent of Two matches, still no power steering, still couldn’t see out the rear window, but it did have a radio.

The engine was the same as that fitted to the Triumph 2000, a large saloon that was used by the police until the 2000 PI came in. 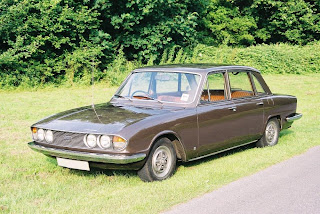 It had two Stromberg Carbs with “dashpots” that had to be topped up with engine oil every week. The problem, with the Vitesse was the ignition circuit; it was basically the same as the Herald-points and a condenser.

But it didn’t like the damp, which wasn’t a good thing in England.

The other problem was the battery; it held enough charge to turn the engine over for about thirty seconds and then would go flat.

Another problem was the brakes. It actually had discs on the front, but when you got the old girl up to speed, the stopping distance was about as short as an oil tanker.

But that wasn’t too much of a problem unless there were other cars in front of you.

We loved it, and expanded our travels, and headed north and northwest.

We found many interesting places, one of which was Henley, and spent our summer Sundays touring about, pub lunches, walks, having picnics and meeting people.

Like the Herald it was a “magnet” and attracted attention wherever we went.

It went like a rocket and was I suppose the “poor mans’” E-Type. It certainly wasn’t as pretty and it didn’t have a top speed of 150. But it would see off most of the other sports cars on the road. 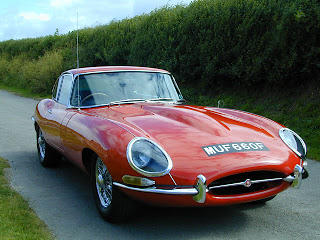 We only had one “hairy” moment that was when we were on our way back from Wales; we were on a dual carriageway and had a tyre burst at about seventy. The radial tyres on the Vitesse were much better than the old cross plies on the herald, and I managed to keep her straight, but it was a “brown trouser” moment.

Winter Sundays were usually spent on maintenance; the Vitesse was a high maintenance car.

Time went on and along side the Vitesse were the Dolomite in all its forms, the 1300 FWD, and the 1500TC as well of course as the Stag. 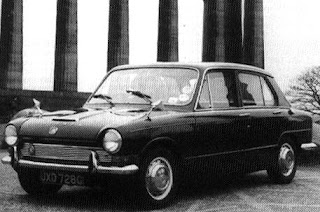 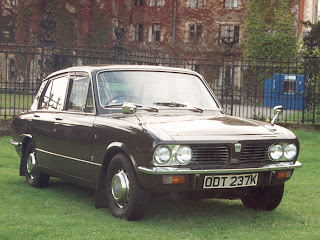 And as we got a bit older we moved to saloons.

That really is our “first cars” story, but if you want I will continue the saga, with our “later” cars.