Last day for the Olympics: Computer says YES: Row, row, row your boat underneath the bridge: Absinthe is back: Potty old pair: the Mongolian Death Worm: and Female? Body builders.

A plethora of weather at the Castle this morn, sunnyish, warmish, breezyish and yet calmish, the garden looks spiffing and the Honda is covered with yellow dust/sand/pollen.
James has fired up a new blog with loads of like minded people it is called Orphans of Liberty and is well worth a visit.
My lovely young lady is due at ten of the morn to clip my head fuzz which is good because I look like a semi bald sheepdog at the moment.

The Political news is the same old bollocks so I won’t bother, but allegedly today is your last chance to apply for tickets to the 2012 Olympics.
Prices range from £20 to £2,012 - the top price for the opening ceremony - and oversubscribed events will be decided by a random ballot.
On the other hand you could sit in a nice comfortable armchair with a drink and watch it all on the Telly for free.
Dahn Unda and right a bit 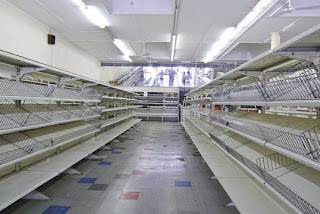 A costly security computer glitch switched on lights and opened doors at one of the biggest supermarkets in the New Zealand city of Hamilton on the morning of Easter Friday.
Shoppers arrived to find not a single staffer on the floor. What ensued was what morality theorists are calling the ultimate ethical test on a religious holiday.
Footage from security cameras shows that while some brazen customers filled their trolleys and quickly left the store, bypassing the empty check outs, surprisingly, many dutifully used the self-check facility to pay for their goods.
Professor Paul Morris, a religious studies expert at Wellington's Victoria University, told the Dominion Post newspaper the 'real life candid camera' placed customers in a tricky situation.
'This is like some mad experiment, because you've sent off to church the religious and it's the secular who have gone shopping on Good Friday ... and you've put them to the test,' he said.
No legal action would be taken against those who stole their groceries, but any money paid back would go to the country's Christchurch Earthquake Appeal. No-one has yet come forward.
Ah-the old religious is good-secular is bad ploy: what would you do?
Keep going East 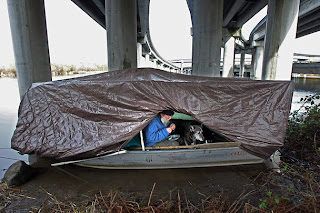 A Seattle man has created a home for himself in a 14-foot boat anchored under a highway bridge near the University of Washington campus.
William Kaphaem has rigged the boat with a tarpaulin for shelter, The Seattle Times reported. He has a Coleman lantern and stove and even a battery-powered radio.
Kaphaem, 51, who uses the name Three Stars, told the Times he previously had rented a room from an elderly couple. They died last year, and he needed low-cost housing.
"I've got a lot of stuff. I didn't want to schlep it around town like some tramp," he said. "I've got more dignity than that."
Living in the rowboat allows him to survive on a monthly disability check of less than $700. He has a range of fishing rods and gets much of his food that way.

Life is a beach…..
Back to the land of food, lovers and veils 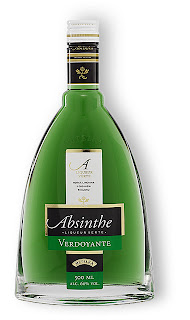 The French Parliament has voted to allow makers of alcoholic beverages flavoured with the absinthe plant to once again label the beverage "absinthe."
The lawmakers voted last week to overturn a 1915 law banning production for sale of absinthe, which had already been partially repealed by a 1999 law legalizing the drink but banning producers from calling it absinthe, Radio France Internationale reported Monday.
About 15 distilleries in France currently sell a drink "flavoured with the absinthe plant" and will now be able to use the traditional name. Officials said the change was made in response to recent Swiss efforts to obtain EU recognition of the drink as a regional product of Val-de-Travers. France claims the spiritual home of absinthe is instead the nearby French town of Pontarlier.
Makes you mad that stuff.
Over to the land of the stoned and the home of the weed 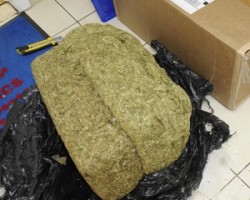 Police say an elderly Pennsylvania couple was the unintended recipient of a very seedy delivery: a five-pound brick of marijuana.
Police in Upper Darby, just outside Philadelphia, say the couple paid little attention to the package when it was delivered last week. Not recognizing the name, they left it on their porch, expecting it to be picked up.
When nobody claimed the package, the couple opened it to find what police say was $10,000 in high-grade marijuana.
Police Superintendent Michael Chitwood tells the Delaware County Daily Times the couple gave the package to police, who determined the return address in Tollison, Ariz. was fake.
Chitwood says the department sees about a half-dozen similar deliveries a year and can sometimes track down the sender.
But they didn’t inhale.
East or West many miles 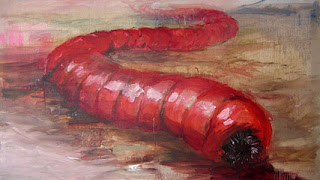 Where giant, scarlet worms burrow in the barren expanse of one of the world's largest, coldest deserts, spewing fiery acid and electrocuting unlucky camels from a distance.
The Mongolian Death Worm.
In his 1926 book "On the Trail of Ancient Man," Andrews recounted with some skepticism a range of secondhand observations from native Mongolians of the so-called intestine worm -- so named for its outward appearance, not its choice of alimentary dwelling.

Unfortunately, history leaves us little more than eyewitness testimony of worm sightings, detailed as they often are.

The MDW is dubious enough that cryptozoologist Loren Coleman, director of the International Cryptozoology Museum in Portland, Maine, displays a vintage model of Japanese kaiju movie hero Mothra in the larval stage, but labels it as the Mongolian Death Worm. Youngsters often ask what the label is doing on Mothra.
Mongo-D "is not a celebrity cryptid like the Loch Ness Monster or Yeti," Coleman told AOL News. It's more of a second-tier creature, he said, "Not like a unicorn or a centaur, but it's very much a shadowy folklore creature."
You couldn’t make it up-could you?
And finally:
Some pics of allegedly female body builders 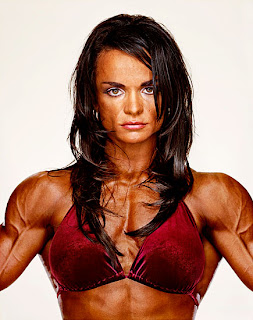 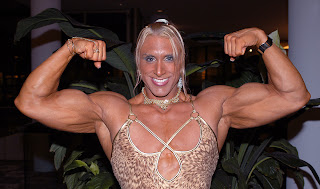 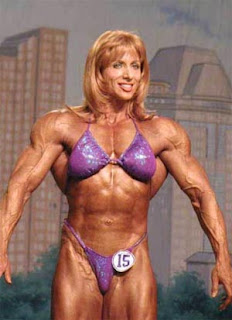 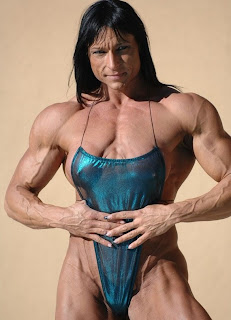 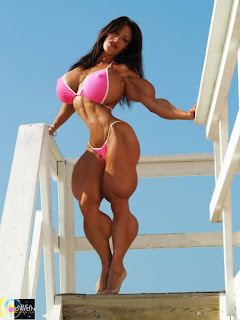 
That’s it: I’m orf to hide my Co2 emissions

And today’s thought: Hollywood is a place where they'll pay you a thousand dollars for a kiss and fifty cents for your soul- Marylyn Monroe
Angus