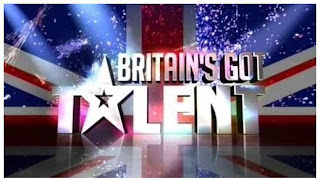 Before the usual just a personal comment, I watched “Britain’s got talent” for the very first time last night: and no it hasn’t.

I usually avoid this type of program like the porky flu because I find them cringingly embarrassing, and last night did not change my mind at all, and I must admit that I only caught the last fifteen minutes of it, and that was by accident as the cat stood on the remote and changed the channel.

The sight that assaulted my eyes and ears was that of a “fat lady singing” loud enough to shatter the crystal, while next to her on the stage was a strange man making bouquets of flowers, I was so shocked that I continued to watch.

The next and last “act” up was somebody who called himself “Stavros Flattley” or maybe “fatly” who proceeded to astound me with the sight of a “Greek Dance” accompanied by a young lad who apparently was his son.

The routine was mildly amusing, the lad made me titter a bit, but there seemed to be “not a lot” of choreography or indeed cohesion as the two shook it about, Simon Cowell sat there like a Cheshire cat and I thought his face was going to explode, sadly it didn’t.

The general public was then invited to phone in and vote for the “best act” to progress to the final which I hear is on Saturday.

Sorry to all you BGT fans out there but I think I would rather stick chopsticks in my eyes rather than watch another episode of so called talent.

Still Cowell is probably making millions from this, and the “competitors” are having their fifteen minutes of fame, each to his own as the saying goes but definitely not my cup of tea (as the other saying goes).

Rant over now back to it: 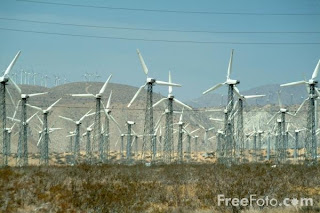 How to save the planet unless your neighbours object to the noise, a homeowner has been ordered to switch off his £20,000 wind turbine following complaints from neighbours that it is too loud.
Father-of-three Stephen Munday, 55, erected the 40ft device with planning permission in a paddock behind his home two years ago.
It generates five kilowatts of electricity a day - the equivalent of boiling 300 kettles - and provides two thirds of his energy needs.
The turbine stands in a paddock behind the four-bedroom detached house in Stanford in the
Vale, near Abingdon, West Oxfordshire, which Stephen shares with wife Sandra, a veterinary nurse.
They bought the turbine from renewable energy giant Segen and successfully got planning permission from the Vale of White Horse District Council to erect it after it was initially refused.
After agreeing to erect the turbine 300ft away from the nearest house the Government Planning Inspector allowed it to go ahead on the condition that it did not make more than five decibels of noise above the "prevailing background".
But after it was erected in February 2007 five neighbours complained about the noise and council inspectors carried out 12 noise level tests at the site.
The council admitted the noise fell short of the government limits but still deemed it to constitute a nuisance.
Patrick Legge, team leader of the council's Environmental Protection team, said: "We accept that the noise did not breach the conditions in the planning application but it was decided that the character of the noise was a nuisance.
"There are no strict noise limits but each case is examined by their independent circumstances."
But Michael Stigwood, an independent noise and nuisance advisor to the council, said the noise affected people's ability to "rest and relax".
He told the court: "The noise was continual and I found it to be a nuisance as it is a noise we don't get used to."
So it didn’t breach the noise laws but it was the “character” of the noise that was a nusisance.

You can’t win can you? 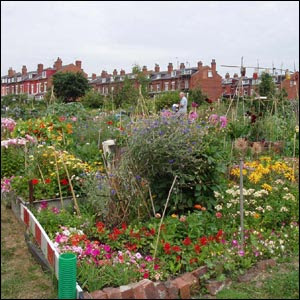 The Cheltenham fruit and veg police have ordered John Weston, who has tended his two council owned allotments for twenty years has been evicted because he doen’t grow enough fruit and veg.

The vegetables at Cheltenham Coucil have decreed that 75% of the allotments must be used for the production of potatoes, spinach, onions, lettuces and soft fruits and other relatives.
Mr Weston, from Cheltenham, Gloucestershire, admits that his land is not as well-stocked as some other plots, but argues that he uses it as a “rural retreat” where he can relax and enjoy the outdoors.
But the plea fell on deaf ears and Cheltenham Borough Council rejected his explanation, serving him with a notice “to remedy the condition of the plots” at the beginning of April, which complained the the allotment had not been kept “fully cultivated or maintained”.
Six weeks later council officers visited his land and found there had been no improvement, so they issued him with a notice to quit. He must vacate the site by Wednesday May 27.
According to the contract he signed 20 years ago, Mr Weston must keep the land in good condition and allow no more that 25 per cent of it to lie fallow.
But he admits he now only uses around 50 per cent of each plot to grow vegetables and fruits like rhubarb, raspberries and gooseberries.
Mr Weston, who works part-time at a garden centre, said he had received no complaints, but the council disputes this.
They claim to have been in touch with him since November after neighbouring plot-holders contacted them about weeds and debris.
“I go down there regularly and while the land is not covered in rows and rows of vegetables, it is designed as a rural retreat,” said Mr Weston, who is married with no children.
“It might look wild, but it’s got character and it produces enough crops to suit me.”
“I just enjoy pottering about. I sow patches of vegetables and fruits but it’s mostly where I go to relax and be outside.”
Fiona Warin, the council’s allotment officer, said: “We have tried to identify plots that are not being used so that they can be handed on to keen 'gardeners-in-waiting’.
“In the past, when demand for allotments was low, people who did not maintain or use their allotments as intended perhaps avoided attention or enforcement action."
All I can say isBorage 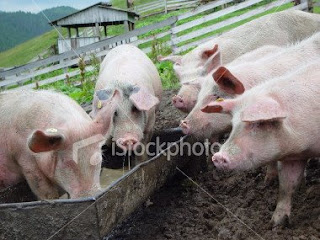 Pig farmers must muff it the Health and Safety Executive has warned that the noise made by pigs during mealtimes can reach more than 100 decibels, louder than a chainsaw or powerdrill.
It has produced a leaflet advising farmers to either wear ear protection, or go nowhere near them while they are eating.
"Large numbers of pigs in a building can create noise levels of 100 decibels or above, especially at feeding time," according to the leaflet, entitled Farmwise – An Essential Guide to Health and Safety in Farming.
Even short-term exposure can be harmful, particularly if workers are exposed to other sources of noise during the day.
"Use mechanical or automated feeding systems to reduce the need to enter the building when it is noisiest, e.g. at feeding time.”
"Make sure any work requiring entry is done during quieter periods."
Employers are legally obliged to ensure their workers are protected from noise levels once they reach 80 decibels, equivalent to the noise inside a tractor cab.
More than one in five farm workers are being exposed to deafening levels, according to the HSE.
And it seems that one hundred in one hundred people are exposed to the anal rules by the HSE. 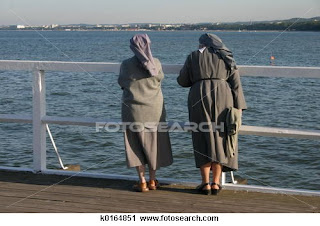 Mooning "nuns" walk away Seventeen British men stood trial dressed in nun's habits on the Greek island of Crete for flashing their bottoms in public, but walked free after no one showed up to testify their behaviour was offensive.
Police said they had arrested the 17 men, aged between 18 and 65, early on Sunday at the popular resort of Malia and a prosecutor charged them with exposing themselves in public and offending religious symbols.
"They were dressed like nuns, carrying crosses, but wearing thongs under their skirts and showing people their bottoms and the rest," said a police official.
Apprehended in the early hours of Sunday, the men were taken into custody and appeared in court on Monday in the same clothes they were wearing at the time of their arrest.
But the court in the town of Iraklio ruled them innocent after no witness appeared to testify against them, the police official said.


Makes you proud doesn’t it? 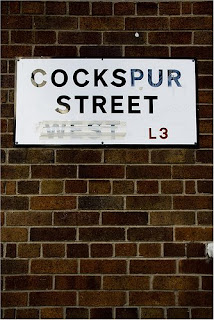 Weary locals scratch Butt Hole Road • The Register Residents of Butt Hole Road in Conisbrough, South Yorks, are hoping that 300 quid will put an end to the pilgrimage which has seen sniggering crowds flock to the internationally-famous road sign, including Yanks in search of a Beavis and Butt-Head moment:

According to the Sun, the four families living on the road stumped up the cash to change the name to Archer Way, having grown weary of years of Butt Hole quips, "pranksters baring their backsides for cheeky photographs" and coachloads of tourists dropping by for a photo opportunity.

Taxi driver Peter Sutton, who has enjoyed six years on Butt Hole Road, admitted he initially thought the address "would be fun", but the novelty soon wore off. As well as the inevitable smart-arsed comments, residents had to endure Butt Hole fans swiping the signage and delivery firms refusing to believe the place existed.

The original name is apparently in honour of a communal water butt which once occupied the site. The new moniker was selected "as the road is just half a mile from a 930-year-old castle".

Personally I don’t see a problem, I have lived in crap house lane for tweny years and no body takes the piss.


“A thick skin is a gift from God.”-Konrad Adenauer