CHunt does a U-Turn: Doomed Boomers: Tied in Le Knot: Sawdust planes: There’s an APP for that: and In a galaxy far-far away.

More than a bit of lack of warm, no solar stuff from dawn’s crack and not even a promise of skywater at the Castle this morn.
Had a day orf yesterday, decided to catch up on some sleep and managed to get fourteen hours, his Maj wasn’t very happy and in revenge decided to sit on top of my bladder at two of the am. 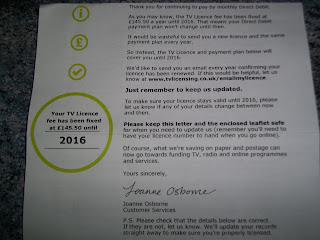 And I discovered that my £145.50 TV viewing ransom to Auntie will not even result in a paper license until 2016.
According to “them” “It would be wasteful to send you a new license and the same payment plan each year, so instead the TV license and payment plan below will cover you until 2016”


Wankers; still at least my £145.50 will permit me to watch the news and Dr Who, and not watch, that stupid dancing thing, Eastenders, Snog, marry avoid and all the other Piss Poor programmes vomited out over the digital airways.... 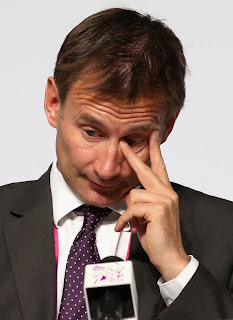 According to the Independent Jeremy CHunt has ordered a fresh political assessment of controversial plans to shut hospital casualty units as one of his first acts as Health Secretary.
Under the plans for north-west London, the number of casualty departments would be reduced from nine to five.
Ealing Hospital, Chase Farm in Enfield, King George in Ilford, St Helier in Sutton, Hammersmith, Central Middlesex and Charing Cross emergency Depts. are at risk.
His move will raise hopes of a reprieve for a number of accident and emergency departments threatened with closure as NHS Trusts cast around for savings.


But apparently his plans have “alarmed” many doctors and hospital managers who argue that merging A&E units into larger, better staffed departments saves lives and frees up money to improve patient care in other areas.


So one of the Piss Poor Policies Millionaires Club Coalition finally does something right and the no mates medics and mangers want their A&Es to close because it will save them money, work and will give them more time to get out on the golf course.


Who is in charge of our Elf service?

And according to “experts”

Only one in six ‘baby boomers’ is retiring in good health, with most succumbing to a range of conditions and diseases including high cholesterol, osteoporosis or cancer, a study has found.
Apparently Government Scientists have discovered that the average baby boomer - referring to those born in the years just after the Second World War - has two medical conditions.
Just over half have high blood pressure, a third are obese, and a quarter have high cholesterol.
A quarter have Type 2 diabetes or ‘pre-diabetes’, meaning they are on the cusp of fully developing the condition.
Almost one in five suffer from a mental health problem, while 12 per cent have chronic lung or throat disease.
Eleven per cent have cancer, the same proportion that has osteoporosis. In addition, 11 per cent have suffered from cardiovascular disease such as a heart attack, stroke or heart failure.
One in six have three or more health problems.
The results are from a study of 2,661 people born in 1946, from every walk of life, whose health has been followed from birth. For this, the latest study, they were assessed between 60 and 64 years of age for 15 conditions.
The study found the origins of poor health in one's 60s could usually be traced back to early middle age.


Interesting-ish, so it has bugger all to do with the NHS, or being a Boomer, but life style which applies to everyone else in berated Blighty...

Piles of washing and ironing send Pixie Le Knot round the bend – but she couldn’t be happier.
Britain’s most flexible woman has crafted a career out of her ability to contort into eye-watering positions.
She said: ‘I was always the most flexible child in the class and knew I had a gift as soon as I took up dance and gymnastics as a kid. It’s fun being able to do something other people can’t. But I really don’t know where I got the natural ability from – all my relatives are doctors.’
Ms Le Knot, from Leyton, London, spends several hours every day training her body to cope with the physical demands of contortion before performing up to five live shows a week. 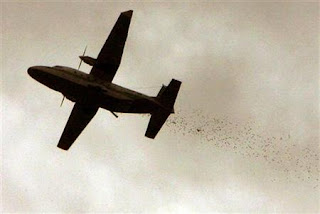 French scientists reckon that passenger jets could be chomping on straw or flying on fuel extracted from sawdust in coming years as the search widens for cleaner alternatives to kerosene.
The "ProBio3" project, started in early July and co-financed by a French government economic stimulus program, aims to use traditional horse-bedding materials to develop a new kind of biofuel that can be used in a 50/50 blend alongside kerosene.
"Tomorrow, planes will fly using agricultural and forest waste," said Carole Molina-Jouve, a professor at Toulouse's National Institute of Applied Sciences (Insa), who is coordinating the ProBio3 project.
Europe consumes around 50 million tonnes of kerosene per year.


Why not use all the wood to build ships and scrap the noisy polluting silver birds that are killing the atmosphere? 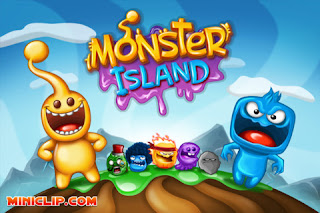 A young schoolboy left his family with a £2000 credit card bill after using an app on his grandfather’s iPad.
Will Smith, six, unwittingly embarked on the spending spree while playing Monster Island, a popular children’s video game.
The youngster had spent the amount on the special app, which involves children "collecting" and "breeding" their own online creatures.

Players then battle their way through the different levels before they reach the “Dark Monster”.

Will had racked up the bill after accessing his grandfather’s password to iTunes, the Apple music store, where bought virtual food and coins at up to £70 a time.

Mr Smith, of Redcar, North Yorks, said, when he explained the situation to Apple, officials agreed to refund the amount.

But while the family was relieved to discover they were not the victims of fraud, Will was upset when told he could not play the game anymore.


Buy him a bleedin Meccano set....


Far-far away and 13.2 billion years ago 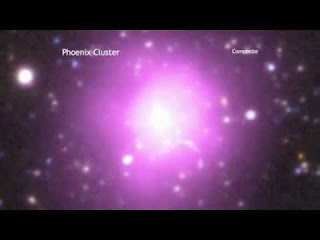 The earliest known confirmed galaxy has been discovered with the help of cosmic lenses formed out of the warped fabric of space and time, researchers say.

This distant, ancient galaxy may have once helped clear out the murky fog that once filled the early universe, scientists added.

Astronomers estimate that the universe began about 13.7 billion years ago during the Big Bang. Recent findings suggest the first galaxies formed less than 500 million years after the universe's birth.

One tool researchers can use to peer at these galaxies are so-called gravitational lenses, magnifying glasses resulting from the warped fabric of reality.

Gravity curves space-time; the greater the mass of an object in space, the stronger its gravitational pull. This, in turn, bends light around it, affecting how telescopes on Earth view it.


The age of this galaxy reveals it formed during the so-called "epoch of reionization" that occurred about 150 million to 800 million years after the Big Bang. This critical but still largely mysterious event occurred when intense ultraviolet radiation cleared the fog of atomic hydrogen that once pervaded the cosmos by ionizing it into its constituent protons and electrons.


Well; you learn something new every epoch...


That’s it: I’m orf to listen to some chillies


And today’s thought:
Daily diary of a Boomer. 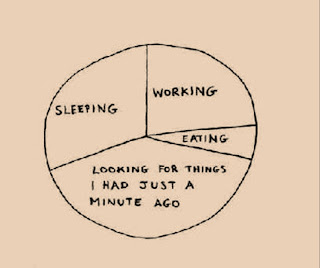