Cold, calm and still dry at the Castle this first of April morn, the garden is almost sorted, the Castle is shining like a new pin and his Maj has discovered the joy of pouncing on the stuff finally delivered by Royal Mail and shredding it before I can throw it in the recycling bin.

And talking of bins 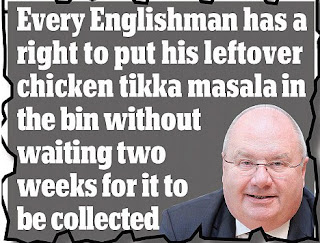 It seems that local councils don’t want to take advantage of the £250 million discovered in Son of a B.......aronet (and alien reptile in disguise) George (my bins are emptied by servants) Osborne’s pants draw to reinstate weekly wheelie bin collections, but instead want to use the dosh to on schemes to increase recycling and collect only food scraps — not black bags — once a week. One even applied for money for a fleet of “low carbon” refuse trucks.
According to the Torygraph:
96 councils are not applying for funds. Most of them have already abandoned weekly collections, and 58 of the 96 are Conservative authorities
34 will apply for money but only to introduce weekly food waste collections, or increase the number of homes covered, rather than bring in a full service
31 wanted money for plans which will do nothing to bring back weekly collections, including sat nav systems for rubbish Lorries, more giant communal bins and even “nappy recycling” schemes
Two councils were in the process of ditching weekly collections — but were still applying to the scheme for funding for weekly food collections
Only 17 authorities which currently have full weekly collections said they would apply for money to guarantee their future.


Left to the place where the unsinkable never reached 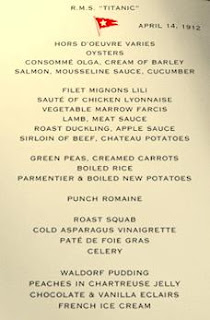 A restaurant in Houston is offering what it calls the Titanic Experience: a 10-course meal comprised of similar dishes served to the ill-fated ship's first class passengers the night they met their demise-allegedly.
The whole event lasts for four hours, from the wine and beef appetizer to the after dinner cheese. To make the experience even more authentic, guests are given the chance to sample a bottle of Armagnac brandy from the year 1900 by the end of the night.
Cullen's restaurant special Titanic package was created to commemorate the 100th anniversary of the ship's sinking on April 15 and will only set you back $12,000… A vicar claims a potato got stuck up his bottom after he fell on to the vegetable while hanging curtains in the nude.
The clergyman, in his 50s, told medical staff at Sheffield's Northern General Hospital that the accident was definitely not due to a sex game.
He had to undergo surgery to extract the spud from his backside, according to The Sun.
A&E nurse Trudi Watson said: 'He explained to me, quite sincerely, he had been hanging curtains naked in the kitchen when he fell backwards on to the kitchen table and on to a potato.


'But it's not for me to question his story.'

And we all know that the clergy don’t tell lies…..

Left again and up a smidge 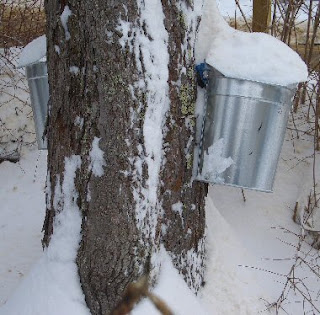 Apparently there is plenty of go-juice in Canada but a dearth of maple syrup, an unseasonably warm winter is being blamed for a maple syrup shortage in much of North America this year, and with a number of maple syrup festivals taking place in coming weeks true connoisseurs of Canadian cuisine and culture are beginning to panic.


Mind you if that’s how they collect it no wonder there’s not a lot of it-I suggest that they fill up jerry cans just in case...

Back in pert Blighty

Yesterday a harem of scantily-clad women strolled down Oxford Street in nothing more than their underwear.
The gang risked causing a pile-up on the busy road as they merrily flaunted their bodies in a variety of lingerie.
The stunt marked the opening of the new Ann Summers store on nearby Wardour Street, as well as National Cleavage Day this Saturday.
NCD is held annually to celebrate women's independence and power in their careers and relationships.
The recruited crew came in all shapes and sizes to show prospective Ann Summers customers that there's something for everyone inside its new store.


Why do I keep missing these things?


That’s it: I’m orf to check out my apps

And today’s thought:
Keep an eye out for spaghetti trees 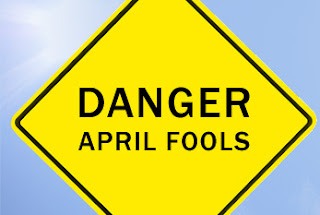