Sunny, dry and calm at the Castle this morn, the study is bulging at the seams with non-adding machines and I inflicted some serious vandalism on the garden yesterday.


Bit late, slight problem with blogger-it doesn't want to insert hyperlinks, so I had to do it manually, and I can't centre any text without moving half the post as well. 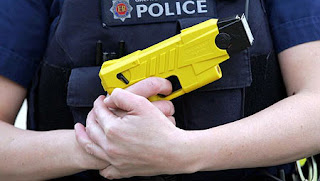 An elderly woman was left "mortified" after being confronted by Taser-wielding police officers - just for watering her neighbour's garden.

Patricia Cook was picking up loose apples and watering plants as a favour to her close friend Karen, who had gone on holiday to Scotland.

"I go to that house every week. My friend, Karen, went on holiday and asked if I would keep an eye on it - if I could water the plants.”

But the 67-year-old pensioner was suddenly faced by police carrying powerful Taser weapons after they scaled a 7ft fence to challenge her.

The drama erupted after another neighbour rang 999 fearing that burglars had broken in.
She had gone into her neighbour's garden opposite her house with her daughter Louise to water plants and pick some apples.

Karen had asked her to look after the house and garden while she was away on holiday.

But two police cars with flashing lights had dashed to the scene after less than 10 minutes of the two women going, with three officers climbing the garden fence.

And over in the land of glowing things 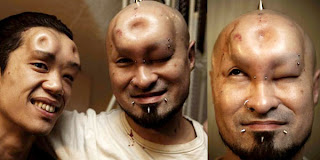 A recent trend in body modification is implanting objects, such as magnets, in the skin.

But the latest thing is injecting saline solution under the skin, which results in “Bagelheads”.

A saline solution drip, which is injected at your local tattoo/piercing shop by a professional piercer. The injection causes massive swelling, which can then be moulded and pressed into the shape of your choosing.

Apparently, if a skin-shaped bagel isn’t enough for you, you can add food dye to give colour to your bump. So, with a few dots of black food colouring, I guess you could easily transform your plain old Bagelheads into a much more delicious cinnamon raisin.

The fad isn’t relegated to just the face. Low-IQ Japanese in Tokyo and Osaka have also been injecting bagels into their boobs, arms and arse.

Thankfully, the bagels only last for one night before your body absorbs the saline solution and the skin returns to normal. Possible side effects include headache, infection, stretched skin, the inability to wear a hat and looking like a real plonker.

If you want a permanent Bagelhead just have a wander over to the nuclear plant.


Left to the big bit above the States 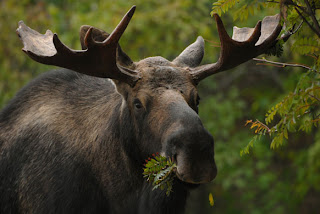 Mounties in Newfoundland and Labrador say they get calls every day during the annual moose hunting season about people shooting the animals from the highway, sometimes while driving.

"They are basically reporting persons driving on the highways and secondary highways hunting from their vehicles," said Sgt. Boyd Merril. "Most honest hunters call it laziness. Some call it dangerous. The RCMP refers to it as unsafe, dangerous and illegal."

Merril said some people drive slowly along the highway, peering at the woods and impending traffic, while others stop to shoot moose from the roadside.

"As well, we get reports of some hunters driving with loaded firearms in their moving vehicles," he said.

The force is reminding people that this behaviour, however convenient, is unacceptable and can yield a slew of charges under the Highway Traffic Act, the Wildlife Act and the firearms sections of the Criminal Code.

"We have an enforcement campaign to deal with issues such as this, but we also have an awareness campaign, as some hunters may not know the difference - even though they should," said Merrill. "It is important to note that this is not the majority of hunters. It is a small but highly visible minority." 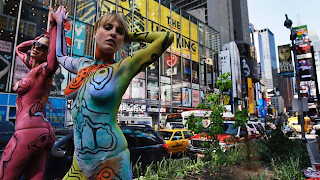 In New York, there's a clear line between public indecency and performance art and it's marked by the setting of the sun.

City officials have told artist Andy Golub who body paints nude women in public that his models cannot go bottomless until the sun goes down, the New York Post reports.

"It's a compromise that is allowing Andy to paint, and the police to do more important things - although less fun," said Golub's lawyer, Ronald Kuby, after a judge agreed to let charges against the artist lapse if he is not rearrested in six months.

Golub had been arrested for public lewdness in late July as he finished painting two nude women in Times Square.

Under an agreement approved prosecutors, he will be allowed to paint topless, but not bottomless, women all day long - subject to any crowd control issues.

Full public nudity is allowed in New York City, so long as it is part of a play, performance, exhibition or show. 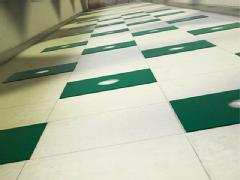 The recycled rubber "PaveGen" paving slabs harvest kinetic energy from the impact of people stepping on them and instantly deliver tiny bursts of electricity to nearby appliances. The slabs can also store energy for up to three days in an on-board battery, according to its creator.

In their first commercial application, 20 tiles will be scattered along the central crossing between London's Olympic stadium and the recently opened Westfield Stratford City mall -- which expects an estimated 30 million customers in its first year.

"That should be enough feet to power about half its (the mall's) outdoor lighting needs," said Laurence Kemball-Cook, a 25-year-old engineering graduate who developed the prototype during his final year of university in 2009.

The green slabs are designed to compress five millimetres when someone steps on them, but PaveGen will not share the precise mechanism responsible for converting absorbed kinetic energy into electricity.

They should put them on the roads; then I wouldn’t have to give half my income to the thieving gas and electric “suppliers”.


Up a bit to Bedfordshire 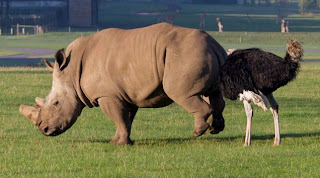 An Ostrich gave a Rhino a close inspection; the two-tonne beast’s back legs left the ground when the bird pecked at flies and insects on his hide.

‘Ostriches are known for their lack of intelligence, their brain is smaller than one of their eyeballs, and this bird probably thought it was being friendly,’ said Abi Crowley, marketing manager for Woburn Safari Park in Bedfordshire.

'Kai has never met an ostrich and it's safe to say this encounter startled him.'


Makes a change from shoving its head in the sand I suppose, at least it is warmer....

That’s it: I’m orf to convert the Honda to electricity.


And today’s thought: The road to success is always under construction.