The sun has got his hat on-orf-on-orf at the Castle this morn; instead of skywater we have oodles of moist atmosphere, no breeze and not a lot of temperature.


More than a bit late this Thursday, been dahn to Tesco on the stale bread, gruel and his Maj’s food run which was a bit confusing because they have stopped stocking his fave Whiskas jelly meat selection and whacked up the price of all the other flavours to £4.39-robbing bastards.


So it looks as if I am orf to Pets at home later.


And the interweb thingy is as slow as the intellect of the Piss Poor Policies Millionaires Club Coalition today.


Here is a nice pic of some strawberries from the underwater garden, this is actually the second crop-I ate the first lot before I remembered to photograph them. 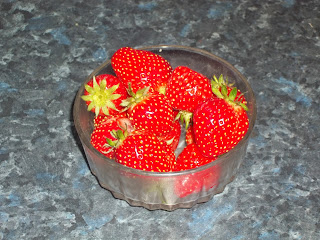 And apparently “they” have found the Higgs Boson-or maybe not

Scientists at Cern (European Organization for Nuclear Research) are confident that they have discovered a new sub-atomic particle and a boson (those which carry forces) but the question of whether it is the Higgs boson or not remains unconfirmed.
"We are very careful in not stating that it is the Higgs boson. It could be the Higgs boson, but I am pretty convinced it is a Higgs boson," Rolf Heuer, director-general of Cern, which operates the LHC, told BBC News.
"Our famous Standard Model contains only one Higgs. That would be the Higgs boson. But there are extensions to the Standard Model, which we need because [this theory] is not everything.
"There could be many more Higgs bosons."
Indeed, according to one idea, there could be five Higgs bosons with similar masses but different electric charges. But there are many other possible schemes to describe the "new physics" that must lie beyond the best theory of how the Universe works.


That’s clarified that then...

And the UK border agency

Has allegedly managed to lose track of about 150,000 foreign nationals staying on after their visas expired, Immigration minister Damian Green blamed the last government - but Labour said the report was damning.
The latest report from the inspector focuses on a previously unknown problem in the UKBA, concerning people from outside Europe who have deadlines to leave the UK.
Many of these people are students and if they do not leave when told to do so, they are added to the "migration refusal pool" (MRP).

They are probably still in the queue at Heathrow....

The knobs at the top of Network Rail 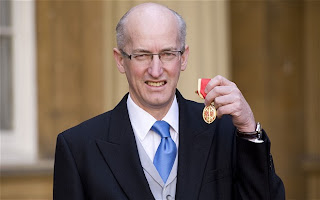 Are seeking long-term bonuses of almost £12 million on top of two other reward schemes for bosses at the taxpayer-funded company.
It emerged this week that the rail operator wants to pay £1.7 million to directors for their work over the last three years and £900,000 in “golden handcuffs” to make sure three bosses stay until 2014.
Now the company has confirmed it is also seeking permission to pay executives up to £11.7 million in future, prompting calls for Justine Greening, the Transport Secretary, to intervene.
The company is backed with £4 billion of taxpayer money and will also benefit from fares increasing up to 11 per cent this year.
Under the plans, a group of up to six bosses, including chief executive Sir Dave Higgins, would share up to £2.4 million every year for five years if they hit performance targets.

Still-we are all still in this together....wonder if “Sir” Dave is related to El Papa?

West to the place where it is warm, wet and salty 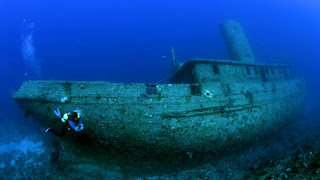 Jack Roberts’ has posted on Craigslist that he is giving his boat away, snag is the 16-foot fishing boat capsized Sunday about 2 miles off-shore near the old Destin Bridge rubble reef in the Gulf of Mexico.
“The Coast Guard said if the boat doesn’t come out of the water, they’re going to charge me with a crime,” he told the paper. “And somebody can sue me if they hit the boat.”
Roberts said he posted his Craigslist ad to avoid a $2,400 salvage fee. He is offering the title to the watercraft, as well as $2,000 worth of fishing gear and $800 cash left aboard, to anyone who can successfully retrieve the vessel and its loot.

Back in the Smoke 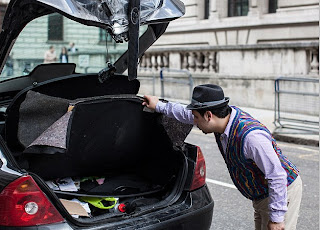 When Mr Razi's car broke down in Storey's Gate, he slipped a note on the dashboard explaining 'this car is broken. I am just waiting for the AA to arrive. Please do not fine! Thank you, yours sincerely'.
He then decided to pay a visit to Buckingham Palace, just a five minute stroll away.

While he was gone, police spotted the car and deciding it was a security risk to the nearby Houses of Parliament, evacuated the area so they could carry out a controlled explosion.

When Mr Razi - a MBA student at the University of Wales visiting London for just 24 hours - returned from his sightseeing trip, he found swarms of police officers scouring the remains of his mangled car.
To add insult to injury - a traffic warden arrived on the scene and issued him a ticket, after being alerted by the police.


A Russian base jumper leaps orf a 120 metre pylon, his parachute fails to open and he does a nice belly flop into the snow.
A sickening thud can just about be made out as he hits the ground, with a dusting of snow visibly rising from the ground on impact.
But the “lucky” Numpty fractured his vertebrae, pelvis and legs and was walking again after a three month recovery period.

A young student at the Chinese University Games appears to forget the basic premise of the 110m hurdles.
After he hit the first two hurdles, the unidentified competitor decided to dispense with hurdling altogether and simply sprinted through the remaining barriers chest first.
He successfully negotiated four hurdles in the fashion, and even managed to catch up with the leaders before the seventh hurdle sent him tumbling into a neighbouring competitor's lane.
Unperturbed, the athlete then clattered the final hurdle whilst still in the wrong lane before finally crossing the finish line in a remarkable sixth place.

That’s it (at last): I’m orf to gather moss from old poo

And today’s thought:
Hit me with your rhythm stick Wimbledon. 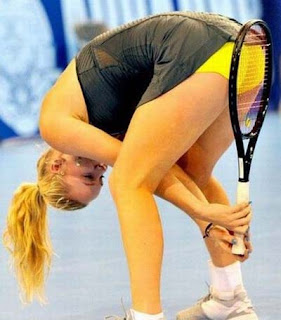