Not a lot of anything at the Castle this morn, no atmospheric movement, no skywater, no solar stuff and just a hint of lack of warm.
His Maj is now 100% fit, we had a bit of a setback but time healed his battered face, but he still won’t go near a window.


Up in the bit next to the leaning tower of Westminster 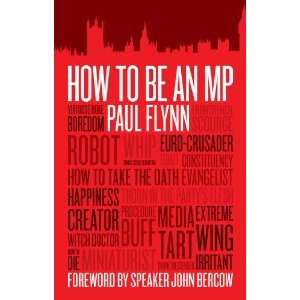 Allegedly the most-borrowed book in the House of Commons library is How To Be An MP, by the veteran Labour parliamentarian Paul Flynn.
The book boasts step-by-step guides on how to placate constituents, advance one's career, claim expenses and fend off an inquisitive press.


So that’s who is to blame then.

And as Pancake Tuesday came and went


Members of the House of Commons beat teams from the House of Lords and the media to win the annual parliamentary pancake race yesterday.
Representatives from the Commons, the Lords and journalists took part in one of the most fiercely contested events in the political calendar, the parliamentary pancake race.
Conservative MP Tracey Crouch, who took part in the race, described it as "über-competitive" and said that she and her team-mates had been "sharpening their elbows".
Their tactics worked, and the MPs crossed the finishing line first.


East to the land of space monkeys, cloned drones and un-stealthy planes 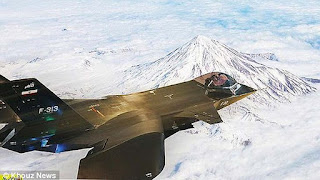 Apparently Iran has been caught out in another Photoshop blunder in an effort to prove its purported stealth fighter jet is the real deal.
An Iranian state news agency released a new picture of the radar-dodging jet flying above snow-covered mountains. 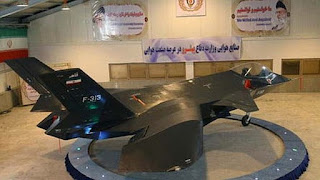 But the picture was immediately suspected to be fake with the lighting on the plane and its position similar to its appearance in pictures on the ground in Tehran at the unveiling earlier this month. 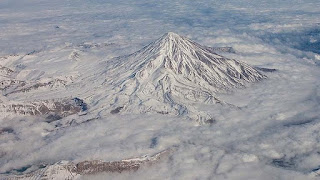 President Mahmoud Ahmadinejad described it as "among the most advanced fighter jets in the world", capable of hitting ground and air targets by stealth, but experts dismissed it as a "laughable fake" which looks like a toy or mock-up model.

Now the new picture has also been laughed off, after it was revealed by The Atlantic Wire that the background image of the mountain was taken from the stock image site PickyWallpapers.com.
Aviation experts have questioned whether the jet shown can even fly as it was too small to accommodate a real pilot and the controls and wiring looked too simple. It also lacked the bolts and rivets found on all aircraft and offered wonky aerodynamics.


Up Norf and even Norfer 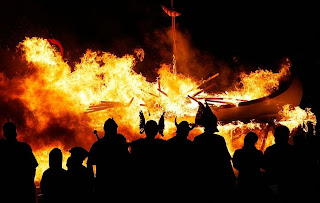 The annual Up Helly a fire festival in Lerwick on the Scottish Shetland Islands to pay homage to the country's Viking heritage has occurred; the daylong celebration consists of costumed parties and culminates in a torchlight parade and the burning of a Viking long boat. There are also plenty of kilts, marches to brass band music, even a new beer found only at the event.
At least 5,000 spectators come to watch more than 1,000 torch carrying "Vikings", in silver plates and helmets, with heavy axes and shields, march the galley around the town. Some enact the roles of famous "Jarls" from the local saga, the Orkneyinga. At the climax, all the Vikings throw their flaming torches into the galley. The whole crowd sings Viking songs and the party continues long after the last flames have died away.


West to the bit where ship shape comes from 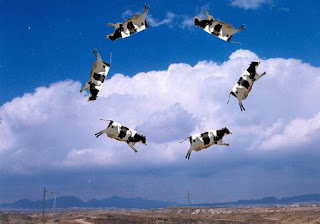 A pilot performed an emergency landing when a fire warning light came on in his cargo plane over Bristol– but the alert turned out to be a load of old cows.
No blaze was found on board and the pilot later said the alarm may have been triggered over Bristol by extra humidity generated by 390 cows being carried on board


But are they real cows-they could be fake cows made up from Yorkshire puddings or Welsh daffodils cunningly disguised.....


East a whimsy to the city of French people 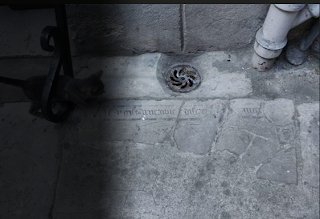 Fancy a stroll over some medieval gravestones-well now you can, “In the heart of l'Ile de la Cite, on the left side of the Cathedral of Notre Dame, a street called Chanoinesse winds its way through the heart of Paris.
A small part of the street was spared by successive urban transformation plans, and as a result it has kept its odd medieval character. This is because, until the XVIII century, this area was the protected domain of Chanoine monks who, isolated from the world, devoted themselves to their work and meditations.
But the monastic past of the street is not the only mystery to be found here: Behind the red door of the building marked number 26, you'll find one of the most unusual and macabre pieces of architecture to be found in the French capital.
A small courtyard rests silently behind the intriguing scarlet door, and the stone laid ground of the courtyard bares some gothic style texts. After a bit of examination, you'll realize their purpose- these are gravestones, which once belonged to churches religious institutions that eventually closed around the 19th century.
Much later, the gravestones were used by the architects of this lovely courtyard to tile the floor. And there they remain to this day, ready to be discovered and explored.”

That’s nice and respectful isn’t it?


That’s it: I’m orf to make sure the old todger is still attached 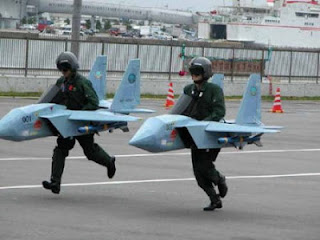 And today’s mellow melody
One of my favourites.
Angus
Posted by Angus Dei at 08:43 2 comments