Easy time for Huhne: Taking the piss in Essex: Bloody great big goldfish: and the Ferrer-Doodle:

Positive numbers on the liquid metal gauge, negative atmospheric movement, not a drop of skywater (yet) and Dawn’s crack has taken a day orf at the Castle this morn.


A wondrous weekend, warmish, exceedingly sunny stuff and even the chance to have a sit in the garden and listen to the birds coughing, the butler is stocking up on fat, carbon neutral teenagers (just in case) and his Maj has discovered the joy of ambush from him/her upstairs knows where....

After being found “guilty” of perverting the course of justice 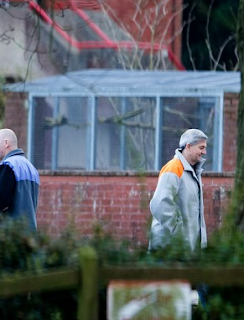 It seems that Chris Huhne still has friends in high-ish places, and is enjoying the aviary, three tennis courts, football and hockey pitches, a gym and fitness suite as well as ornamental gardens at the “Savoy of slammers” HMP Leyhill, Gloucester, where there is no perimeter fence and convicts have keys to their own rooms.
Apparently the prison’s canteen is stocked by fresh produce from the grounds, where inmates can do the gardening. Prisoners aged over 50 are also offered the chance to do “gentle” exercise such as Pilates.
Although Huhne was sentenced to for eight months in March after his former wife took speeding points on his behalf. He is likely to be released after serving just eight weeks.


Probably come out and get a job with HBOS.....

Over to the only way place 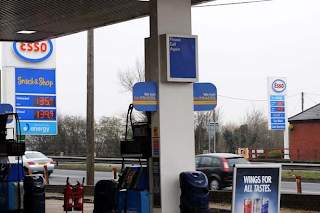 Two Esso branded garages on opposite sides of the A127 in Essex, have a 3p variation on diesel, drivers heading towards Southend-on-sea are charged 139.9p a litre, while those going the other way towards London face forking out 142.9p.

And the money grabbing loot making monkey’s excuse-An Esso spokesman said: “We run a number of sites across the country. Some are company operated, some are operated by agencies. Prices are set on a site-by-site basis.”
Bollocks....


West to a wet place in Tahoe

Giant goldfish (some growing as big as 18 inches) are now breeding at a brisk pace in Lake Tahoe, California.

Apparently the reckless behaviour of "aquarium dumping" threatening local ecosystems, but at least the local sushi restaurants are doing well...


And finally on this no news Monday: 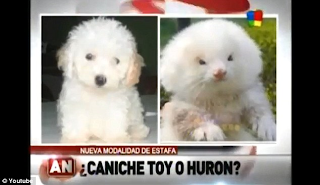 Gullible bargain hunters at Argentina's largest bazaar are forking out hundreds of dollars for what they think are gorgeous toy poodles, only to discover that their cute pooch is in fact a ferret pumped up on steroids.
One retired man from Catamarca, duped by the knock-down price for a pedigree dog, became suspicious he had bought what Argentineans call a 'Brazilian rat' and when he returned home took the 'dogs' to a vet for their vaccinations.
Imagine his surprise when his suspicious were confirmed - he had in fact purchased two ferrets that had been given steroids at birth to increase their size and then had some extra grooming to make their coats resemble a fluffy toy poodle.


That’s it: I’m orf to check out “Jelly Chocolate” (just in case)


And today’s thought:
They told me it came from Longleat 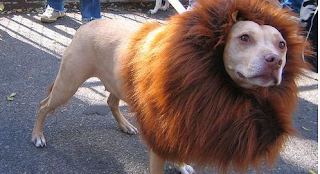