Lovely and warm and dry yet again at the Castle this morn/afternoon, very, very late posting, mainly because the Angus internet connection went tits up until eleven of the am.
Been to Tesco for stale bread, gruel and pussy food, and saw this outside the entrance, I can’t work out if it is “topiary” or a piss poor attempt to disguise Crimbo. 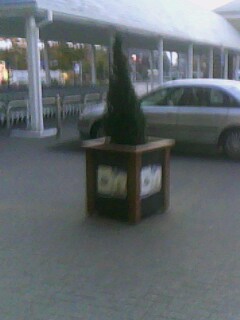 So much for “their” ‘every little helps’, I bought this pack of washing powder which was labelled as a “price cut”, the last one I bought (admittedly about six weeks ago) cost about a quid, this one cost £1.68-same packaging, same weight, same product.... 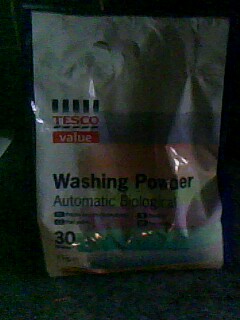 And I stopped and took this on the way home. 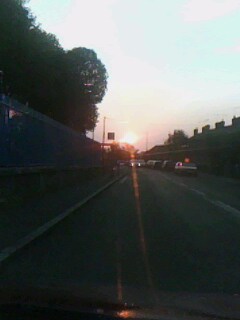 I see that Silly Billy Hague 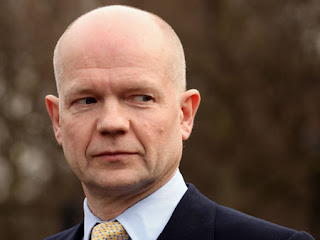 Has inserted his facial protuberance into Nick (who?) Clegg’s rear exit, while mumbling-“Faced with a necessary but difficult decision over tuition fees, Nick Clegg stuck with it," "In May, the British people affirmed…that first past the post is the best way of running our democracy. He stuck with our agreement all the same.
"We should always have the generosity of spirit to recognise the contribution he makes in turning this country around." 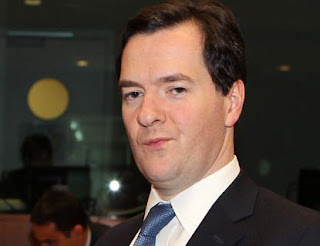 Son of a B...aronet and reptilian alien in disguise George Osborne has somehow managed to find more than a few quid (£800,000,000) lurking in his piggy bank to fund another year of Council Tax freezes.
Mr Osborne has told Sky News the key to the Government's economic policy remains debt reduction: "We are able to take measures - like on council tax - that can provide help for families.
"But the biggest help I can provide families is to sort out the British economy and sort out the mess that this Government inherited and above all keep interest rates down. 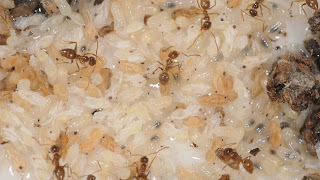 Apparently Hairy, crazy ants are on the attack in the US invading Florida, Texas, Mississippi and Louisiana.
The flea-sized critters are called crazy because each forager scrambles randomly at a speed that your average picnic ant, marching one by one, reaches only in video fast-forward. They're called hairy because of fuzz that, to the naked eye, makes their abdomens look less glossy than those of their slower, bigger cousins.

And they're on the move in Florida, Texas, Mississippi and Louisiana. In Texas, they've invaded homes and industrial complexes, urban areas and rural areas. They travel in cargo containers, hay bales, potted plants, motorcycles and moving vans. They overwhelm beehives — one Texas beekeeper was losing 100 a year in 2009. They short out industrial equipment.

If one gets electrocuted, its death releases a chemical cue to attack a threat to the colony, said Roger Gold, an entomology professor at Texas A&M.

"The other ants rush in. Before long, you have a ball of ants," he said.

Better start putting the kettles on then...

Still over the sea in America 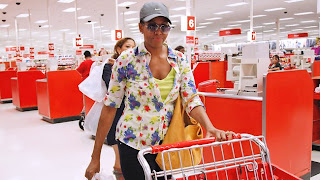 Michelle Obama caused barely a stir in a suburban Target, loading up like a regular mum, casually dressed in a floral-print shirt, yoga pants and sunglasses.
At the Alexandria outlet, just 15 minutes drive from the White House, manager Maria Panagopulof said President Barack Obama's wife shopped almost unnoticed. "People did not approach her - she was very incognito," she said
"The cashier recognised her but she was very unassuming."
A spokeswoman said that Mrs Obama liked to live normally and "it is not uncommon for the First Lady to slip out to run an errand, eat at a local restaurant or ... enjoy the city outside the White House gates". 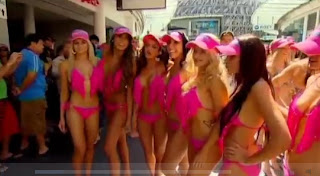 357 bikini-clad women set a new world record for the largest bikini parade on the Gold Coast in Australia.
The event was organised by a local newspaper, the Gold Coast Bulletin.
The bikini-clad women started the parade at a Gold Coast shopping mall, after which the women paraded for the required distance of 1 mile (1.6 kilometres) along Surfers Paradise beach.
Officials from the Guinness Book of World Records were there to confirm that with 357 women in the procession, a new record had been set.
The previous record was set by the Cayman Islands in June 2010 with 331 participants.


I knew I should have used my air miles up.

That’s it: I’m orf to heal my cracked lawnmower.


And today’s thought: If a stealth bomber crashes in a forest, will it make a sound?