Not a good start to the day, got up at six as usual and no water, just that horrible hissing noise as though some one had shoved a spitting cobra up your pipe.
The kettle was empty of course, so no cup of tea, no shower, no wash, no shave and I could only flush the loo once.
Have a combination boiler they said, it will save you money and you won’t need a 500 gallon immersion heater taking up half of the upper floor, yeah right.
Even the cat is miffed because she can’t have fresh water, I get really pissed off when “people” say “we are so lucky to have fresh clean water just by turning a tap on”, no we bloody aren’t, we pay for it at extortionate rates so that the fat cat plonkers at the water boards can live in their mansions and sail their cruisers up and down the rivers.
We used to be “fed water” by a very attractive Victorian water tower, and were never “cut off” but they decided to demolish the tower and replace it with a phone mast because there is more profit in it than actually doing their bleeding job and supplying water.
The country is going down the pan.
First up:
Livingstone and the lizards 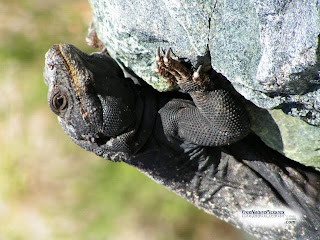 Ken Livingstone the former mayor of London, plans to marry his longtime partner at the zoo in a pavilion next to the reptile house.
Livingstone and Emma Beal have been involved with each other for more than a decade and have two children. The former mayor announced his wedding plans Friday, The Independent reported.
We have been looking to get married for years, Livingstone said. We decided this seems to be the ideal period.
After the ceremony in the Mappin Pavilion next month, guests can view whatever they want in the London Zoo for free.
A wedding can be quite boring for young kids, Livingstone said. But they can go and look at the animals. I know the place. I just like it.
As mayor, Livingstone was known as Red Ken for his left-wing politics and King Newt for his love of amphibians and reptiles. He once applied unsuccessfully to be a zookeeper and has a pet chameleon named Harry.
While he was in office, Livingstone introduced free trips to the zoo for children.
To see his relatives in the reptile house no doubt. 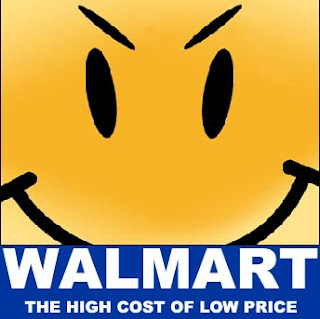 Police in New Haven, Connecticut accused a Wal-Mart worker of beating an assistant manager in a store aisle with an aluminum baseball bat after getting reprimanded for the second time in a few days. Officer Joseph Avery said Tuesday that police are still looking for the 26-year-old suspect. They plan to charge him with first-degree assault and breach of peace.
Avery said the worker grabbed the bat off a shelf and hit 29-year-old assistant manager George Freibott nearly a dozen times at about midnight Monday, after Freibott wrote the worker up for poor job performance.
Avery said Freibott suffered a possible broken arm and many bruises.
Police said the store was closed to shoppers at the time.
Hope he paid for it; the bat that is.
I pod playlist puts you at a disadvantage

The University of Cambridge have carried out research into I Pod playlists.
The study found that we make assumptions about someone’s personality, values, social class and ethnicity based on their musical preferences.
Classical buffs are seen as ugly and boring, while rock lovers are regarded as emotionally unstable and pop fans are considered to be rather dim.
Perusing a person’s iPod playlist can “reinforce stereotypes and, potentially, social prejudices”, said Dr Jason Rentfrow, who led the research at the university’s Department of Social and Developmental Psychology.
“This research suggests that, even though our assumptions may not be accurate, we get a very strong impression about someone when we ask them what music they like.”
Subjects in the study were asked to ponder six musical genres: rock, pop, classical, jazz, rap and electronica.
Jazz fans elicited the most positive response as they were considered to be imaginative, peace-loving liberals with friendly and outgoing natures. Classical buffs are perceived as quiet, friendly, responsible and intelligent but also unathletic, physically unattractive and dull.
Those with a preference for rock songs are deemed to be “natural rebels”, thoroughly irresponsible and emotionally unstable, while pop fans are seen as conventional and calm but lacking in intelligence and wisdom.
Rap aficionados are viewed as athletic and self-respecting but disorganised and “more hostile” than other music fans. Lovers of electronica are “a bit neurotic”.
The research was carried out to mark the university’s 800th anniversary.
So what are you?

Fly me to the bottom of the sea 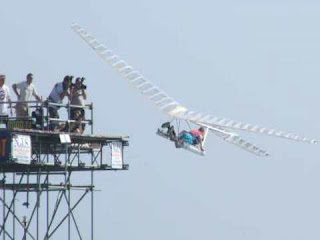 Thousands of spectators gathered to watch contestants try to flap or glide themselves the furthest off Worthing Pier in the annual International Worthing Birdman competition in West Sussex.
The aviators are attempting to achieve mechanically-unaided flight over Saturday and Sunday. The competition was moved to Worthing in 2008 after Bognor pier was shortened by 80ft (24m), making it unsafe for fliers.
A £30,000 prize is on offer to anyone who can fly furthest over 328ft (100m). Jonathan Ansell, a former tenor with the group G4, took part in the competition
The competitors aim of trying to claim the jackpot by 100 metres failed, but one competitor, Steve Elkins, came agonisingly close with his distance of 99.87m.
Despite his disappointment, his flight, completed in a modified glider, did see him break the long-standing record, set in 1992 by Ron Freeman, of 89.2 metres.
Mr Ansell, dressed in pink in aid of Breast Cancer Care, was the benchmark aviator whose distance of just over 16m determined if a competitor had flown or flopped.
Sharon Clarke, the organiser, said: "This year has been fantastic. The weather has been lovely and there has been a fair bit of wind, which is what the competitors need.
"It's a real family event and is a little bit eccentric too."
Entrants include Michael Keen flying as a Hobbit from Lord of the Rings, Steven Bond as a giant puffin, James Wiggleworth as Inspector Gadget and John Donnelly in full Highland dress.
I have been to this and if you are in the area go and see it, best day out that I have had for a long time.
And finally:
Some more DIY pictures, and the best ship name I have ever seen. 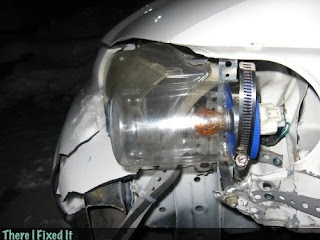 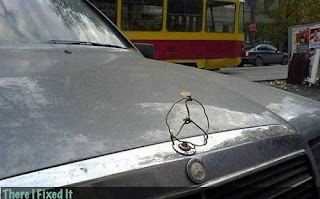 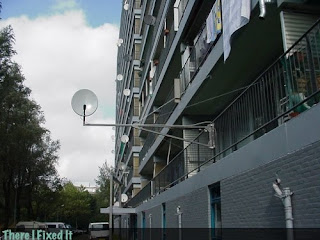 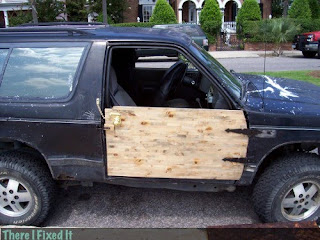 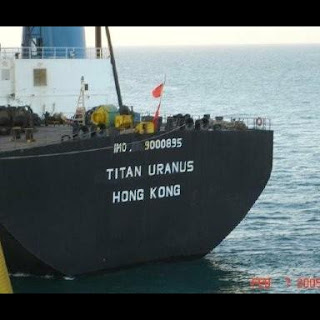