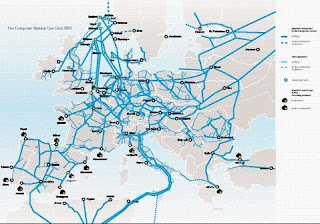 This is a phrase that has started to be used with more frequency.

I suppose the Russia-Ukraine thing: pay us what we want or we will cut off your gas supplies-BBC NEWS has brought it to peoples attention.

Putin says: “The era of cheap gas is coming to an end “what Firkin “era” of cheap gas? Suppliers of our gas are paying $500 or more per 1000 cubic metres, which by the way allows us customers to work out how much we SHOULD be paying the gas companies.

There are also moves afoot to form a “cartel” of gas exporting counties, but all involved of course denies this.

But where does this end? Will OPEC suddenly decide that oil is too cheap and if we don’t pay the price THEY think we should, will they stop selling oil to us?

Of course they won’t, because doing something like that will eventually destroy their economy, having all their eggs in one basket is a disadvantage to them.

The same applies to Russia, they are dependant on gas exports, and treating one “customer” in this way will only piss off the others.

Mind you the “decadent” western gas suppliers would only pass the exorbitant prices on to us, the same way they have been for years.

The price of gas which is linked to oil prices: should be determined by market forces, and an attempt by a country which is still reeling from the collapse of the Communist hierarchy to blackmail Ukraine will not endear it to the rest of the world.

“Russia's Vladimir Putin had earlier warned Ukraine not to disrupt the transit of gas to Europe.”

Err- am I being dim here but isn’t it Russia that is disrupting supplies?

Is this a form of terrorism disrupting the lives of the people, or just “my dads bigger than your dad”?

“Common definitions of terrorism refer only to those acts which are intended to create fear (terror), are perpetrated for an ideological goal (as opposed to a lone attack), and deliberately target or disregard the safety of non-combatants.”

Seems to fit this definition.

"Democracy consists of choosing your dictators after they’ve told you what you think it is you want to hear."