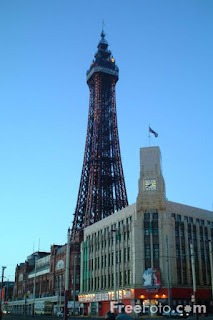 I kid you not, Blackpool even have a French language website in their bid to attract les visiteurs de France.

I am not knocking Blackpool, I went there once……….

A “light” at the end of the tunnel for smokers: British pub finds smoking ban loophole the landlady of a British pub has exploited a loophole in the country's smoking ban by opening a "smoking research centre" where drinkers can light up legally, reports said Wednesday.

Locals at the Cutting Edge pub in Barnsley, northern England, must fill in a questionnaire on their smoking habits to satisfy legal requirements before sitting down for a drink and a cigarette in the centre.

England and Wales introduced a ban on smoking in enclosed public places in 2007, contributing to tumbling beer sales which have forced over 2,000 pubs to close in the last year, according to the British Beer And Pub Association.

The Cutting Edge's landlady Kerry Fenton opened the centre, which is a separate room in her pub, five days ago.

"It's given business a shot in the arm and it's all in the name of research, legal and above board," she told the Sun newspaper. "I'm a non-smoker but I believe in the freedom of the individual."

The loophole in the law was discovered by pub regular James Martin, a 40-year-old printer. The local council told the paper it intended to enforce the smoking ban at the pub.

Well it was worth a try.


Don’t forget to check the toilet BEFORE you sit down Taiwanese rat snake bites Taiwanese trouser snake A Taiwanese man is recovering in hospital after a snake sank its fangs into his todger as he sat down on the toilet at his rural home, Reuters reports.

The unnamed 51-year-old Nantou County victim suffered "minor injuries" to his wedding tackle during the attack.

The China Times explains: "As soon as he sat down, he suddenly felt a knife-like pain and reacted instinctively by standing up. When he looked down, he saw the big snake."*

Reuters helpfully notes that slippery customers "regularly enter rural homes in Taiwan and other sub-tropical regions of Asia". Mercifully for the victim in this case, rat snakes (genus Elaphe) are non-venomous, but will "strike from an upreared position" if threatened, as Encyclopædia Britannica explains.

Of course, there are still health risks attached to having a rat snake chew on your trouser snake. The director of the hospital treating the unfortunate chap said: "As soon as he has passed the risk of infection, he can go. A snake's mouth isn't always clean."

*We resisted it, and so can you. The first person to make the "When he looked down, he saw the big snake... and then he saw the reptile too" gag will be banned from El Reg for a month.


And back to Todgers: Jamaica cracks down on 'daggering' after broken todger upswing • The Register Jamaican doctors have warned of the dangers of daggering, after being presented with a forest of fractured penises over the last year.
According to reports, daggering appears to be either a bizarre sexual practice or a music and dance craze. Or possibly both at the same time, if these videos are any thing to go by.

Either way, the practice is threatening to undermine the manhood of the island nation.
The Sun reports that Doctors have seen a trebling of cases of broken penises in the last year, which they are attributing to rough intercourse. They warn the condition can result in permanent damage.

A doctor at Kingston Public Hospital told the paper that “During very rigorous intercourse the man can hit the woman’s pubic bone and sustain a fracture. There is a loud popping sound, excruciating pain and swelling.”

Fully dressed, dance style daggering can be equally dangerous, with the Jamaica Star reporting the case of one 34 year old dance-goer who "decided to follow the instructions of the selector and 'dagger' the nearest female."

The man's putative partner didn't care to dance, and bit his bottom lip to make her point.

As he told the paper, she declined to release him once she had a grip: "Mi deh a Chubby Dread memorial, rouna Southside and di selector seh mi mus hold har. So mi start dagger and she jus spin roun an bite mi. Mi bawl out fi di people dem hear mi. Di people dem seh mi mus hold on pan her, but she neva waan let mi go."

The would-be daggerer says he will only dagger with permission in future.

What recession? Sheikh pays £250,000 for Household Cavalry to fly to Abu Dhabi - Telegraph Sheikh Mansoor Bin Zayed Al Nahyan, who is one of the richest men in the world, has arranged for a specially adapted Boeing 747 to take the horses to the Middle East.

On arrival, the mounts will be transferred to air-conditioned stables, with a team of staff to pamper them.

Meanwhile, the soldiers will fly business class and stay at one of the country's finest hotels, at the sheikh's expense.

Household Cavalry spokesman Captain Michael Fry told the Daily Mail: "It looks like the horses are going to get better treatment than we will."

The Musical Ride has been a part of the public face of the Household Cavalry for many years, first performing at The Royal Tournament in 1882.

Their performances comprise a series of cavalry drill movements set to music.
The team, based at the Household Cavalry barracks in Hyde Park, take part in all state occasions, such as Trooping the Colour and shows across Britain.

But their trip to Abu Dhabi will be the first time they have travelled outside Europe.
The trip was approved by senior Army officers because it is considered an opportunity to strengthen links between Britain and the UAE.

It is understood that Sheikh Mansoor, who owns 52 racehorses and is an accomplished rider himself, has not paid for the Household Cavalry's services.

However, he has offered to cover the costs of the trip, and to make a contribution to the Household Cavalry Museum.

Captain Fry added: "Essentially none of it would be possible without the extraordinary generosity of the sheikh.

"It is an unbelievable opportunity for the team and we looking forward to it immensely."

Sheikh Mansoor is the brother of the ruler of Abu Dhabi, the biggest of the United Arab Emirates, whose family fortune is estimated at about £555 billion.

Nice work if you can get it:

Angus Dei-NHS The Other Side
Posted by Angus Dei at 08:46 0 comments