Contemporary justice: blow up sleeping policeman: the magic log: Weymouth wanker: and a rodent in a manhole.

Vast amounts of lack of warm stuff, oodles of wet stuff and quite a lot of atmospheric movement at the Castle this morn, but not as bad as yester-aftermorn when lakefuls of skywater descended for several hours accompanied by big noisy bangs and mega kilowatts of free Leccy.
His Maj was out at the time hunting for frogs and came in looking like an exploded ken Dodd. 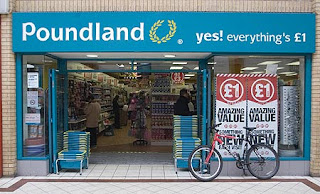 A graduate who likened being asked to stack shelves in Poundland through a Government employment scheme to slave labour is not living in the modern world, a senior judge ruled.
Mr Justice Foskett expressed incredulity at an attempt to use human rights laws designed to combat “colonial” exploitation to challenge a Government back-to-work initiative.
He said arguments advanced on behalf of Cait Reilly, an unemployed geology graduate, were a “long way from contemporary thinking”.
The judge was speaking as he dismissed a legal challenge to two key employment schemes involving unpaid work on behalf of Miss Reilly and Jamieson Wilson, an unemployed HGV driver from Nottingham.


The irritable bowel twins Iain Duncan Smith, the work and pensions secretary, welcomed the judgment and accused those who campaigned against the schemes as being “opposed to hard work”.

I’m in two minds about this-


The Government back-to-work initiative is a good idea


-how can you say that unemployed people working for nothing is acceptable in the twenty first century?


Because it gives then some idea of what it is like to work and begins to form a “work ethic” in their lives.


But doesn’t it take advantage of the unemployed?


No, they are still paid their piss poor benefits but it puts them into the workplace with the very slim chance of a permanent job.


But wouldn’t the money be better spent on training?


Yes; maybe they should change the name of the scheme to “get orf your overeducated arse and sort your lives out initiative”


But what about those who have no qualifications?


East more than oodles to the land which has many, many athletes 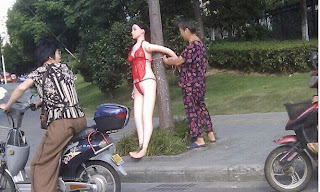 In order to stop speeding motorists a fed-up pensioner has bought a blow up doll and dressed it in sexy red lingerie so motorists would slow down to take a look.
An accident black spot has had the number of crashes reduced after a blow-up sex doll was tied to a tree in a bid to slow drivers down.
The 67-year-old purchased the inflatable sex toy and added a few slinky additions to ensure it caught the attention of drivers.
"There are a set of traffic lights near my house and the cars just shoot through them as fast as they can," explained Chen.
"It's very dangerous.
"The police aren't interested so I bought this doll and tied it to the tree.
"I thought that drivers would slow down if I could give them something worth looking it."
Police admit that accident figures have dropped since Chen started to make a dummy of the speeding drivers.

Still in the Eastern part of the world 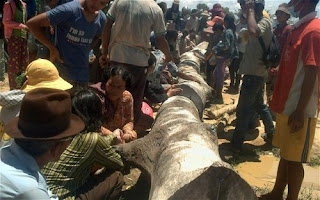 A 13-meter (42-foot) log has been the main attraction in Cambodia’s Pursat province for a couple of days now.
According to village chief Hun Nov “They believe the log has magical powers, about 100 people come every day to visit the log to ask for lottery numbers or to cure their sickness”
Visitors even bring offerings such as pig’s heads or whole boiled chickens.

The log first made news after several locals had touched it and won the lottery. 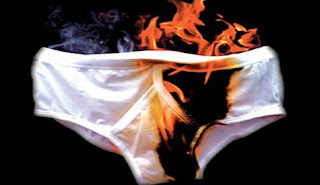 And dahn to the place where little plastic things float about powered by atmospheric movement acting on big bits of nylon.


Fire-fighters say they saved a flat from destruction after its domestically challenged resident tried to dry his wet socks and underwear in a microwave oven.
The Dorset Fire and Rescue Service said fire-fighters rescued the man from his home and extinguished the kitchen blaze Monday.
The fire destroyed the appliance along with the two pairs of underwear and socks inside it, and caused smoke damage to the apartment in Weymouth, a town on England's southwest coast.
"The fire safety message here is to never put clothing of any kind in the microwave or an oven to attempt to dry them," the Dorset fire-fighters said in a statement.


I do appreciate a proper Numpty...


Right a smidge to the land of BMW boxes 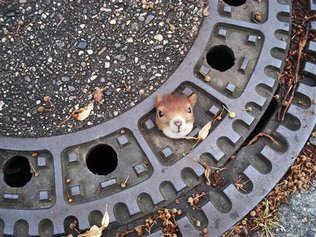 Police in northern Germany used olive oil to free an animal trapped in a manhole cover.
Police spokeswoman Kathrin Feyerabend said Monday a woman on the outskirts of Hannover discovered the red squirrel Sunday after hearing its cries.,
Its head was poking up above ground through a hole in a manhole cover, its body dangling beneath.
After unsuccessfully trying to push the head back through gently, police officers removed the cover and rubbed olive oil around the squirrel's neck.
Holding back its small tufted ears, they were able to successfully release it.
But Feyerabend says the happy ending was short lived - the squirrel died several hours later, likely from stress.


A red squirrel up your manhole-no wonder it died….


And today’s thought:
Soon to be unemployed get free tickets-Olympics 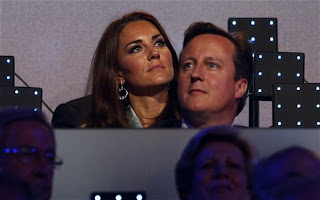