It seems that the Indian autumn has gone the way of the economy-dull, dingy and drizzling at the Castle this morn.
The study is filling up with objects in need of a re-boot, the garden is still in need of a medium, fettling and his Maj is sitting by the rear exit with the hump. 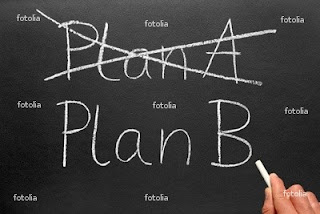 Apparently son of a B...aronet and reptilian alien in disguise George Osborne has come up with a Plan A and a bit-he wants to bypass Britain's foot-dragging banks by injecting tens of billions of pounds into struggling small firms in an attempt to head off a "double-dip recession".
I think I have got this-we “gave” the banks tens/hundreds of billions to bail them out so that they could lend money to businesses to help dig us out of the hole that the banks created.
And now “we”; not the “treasury” are going to lend businesses tens of billions to help dig us out of a possible double dip recession. 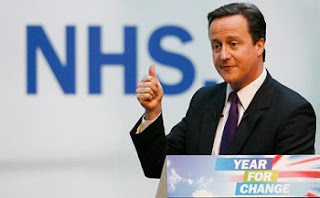 The NHS will introduce mandatory language tests for doctors moving to Britain after training elsewhere in the European Union.
The decision follows a series of cases in which patients have died or suffered poor care as a result of doctors speaking sub-standard English. The issue was brought to national attention three years ago when Dr Daniel Ubani, a German-trained GP on his first out-of-hours shift in Britain, killed David Gray, 70, by giving him 10 times the normal dose of diamorphine.
In his speech to the Conservative Party conference, Andrew Lansley will say that the Medical Act will be amended so that doctors must speak good English to practise in Britain.
There are more than 88,000 foreign-trained doctors registered to work in Britain, including 22,758 from Europe. They account for almost a third of the total.

Part “B” of the plan to empty hospitals? 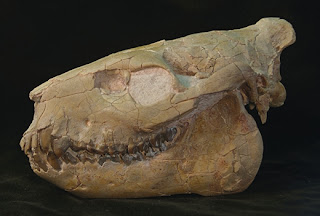 A Longview, Wash., man accused of digging up the skull of a hog-like animal that predated humans by 20 million years has been banned from national park lands for a year.
The Oregonian reports (http://bit.ly/oWBYtN) that 48-year-old David Wixon also must pay $4,500 in restitution for the misdemeanour crime of depredation of government property.
The fossil was from an Oreodont, one of a number of stout, hooved, plant-eating animals now extinct.
Court records say an off-duty interpretive ranger saw Wixon using a rock hammer at a site at the John Day Fossil Beds National Monument in May 2007, leading to an investigation by federal agents. Authorities say they searched his house, and he returned the skull.


Down a bit and left a fair way 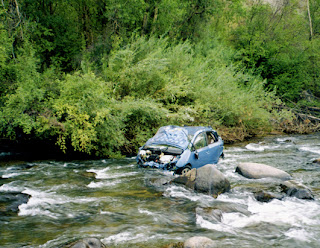 The McCarthy family of Pleasanton, California, have an unusual explanation for how their 2002 Toyota Prius got totalled over the northern summer.
In short, a bear took the vehicle for a spin from the driveway of their west Lake Tahoe cabin, the Contra Costa Times said.
It seems the bear got into the car easily enough, but once inside became stuck, and got mad about it - ripping seats open, biting a chunk out of the steering wheel and damaged the gear box, which shifted the car into neutral.
Awakened by noise from the 3.30am raid, the family watched from the safety of the cabin as the Prius slowly started rolling out of the slightly sloped driveway. Picking up speed, it rolled across the street, hopped a small rock wall and finally came to stop on the porch steps of a neighbour's house.
Brian McCarthy, 61, said he did not know why the bear, which escaped back into the woods, would want to get in the car in the first place.


It probably wanted somewhere clean to have a crap because the woods are full of Bear shit.... 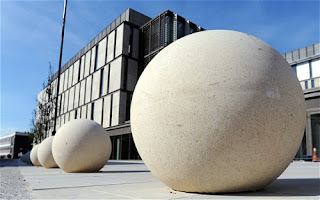 A county council has been criticised for spending £40,000 on 68 giant granite balls to protect its new headquarters from ram-raiders and terrorists.
Tory-run Staffordshire County Council has positioned stone bollards costing £587 each outside its £38 million Staffordshire Place offices.
They have been described by the council as part of "an essential security package" - yet regular upright bollards are on sale for less than half the cost of the balls.
But Councillor Tom Harris, whose Forebridge ward takes in Stafford town centre, said: "I would have expected a cheaper option than the spherical bollards.
"The council says it will make savings from the move but they are spending nearly £40 million to save £10 million.
Councillor Mark Winnington, cabinet member for environment and assets, said: "The stone bollards surrounding Staffordshire Place are part of an essential security package designed to protect the building and its occupants from threats, including ram raids.
"Some of the options we were given were more expensive than the one we decided on while others were less expensive.
"Our main priority was to provide value for money for taxpayers. We wanted to provide sturdy protection while also ensuring that the area surrounding the building was aesthetically pleasing.

That’s it: I’m orf to send BT a stiff letter on a bit of cardboard.

And today’s thought: Books have knowledge, knowledge is power, power corrupts, corruption is a crime, and crime doesn’t pay; so if you keep reading, you’ll go to prison.