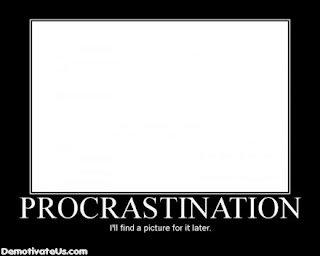 So there I was, sitting on the settee watching Morse yesterday, when out of the corner of my eye I saw a movement; yes it was a giant dee-daw (spider) galloping across the front of the fireplace, and it was wearing hobnailed boots, and I swear it was doing Irish dancing as it kept stopping and raising one leg.
I apologise to all those that pick them up and put them in the garden, but I belted it with a free newspaper and tossed it out of the window.
And I would like to disagree with those who say they are lucky: what is lucky about having an eight legged Michael Flatley disporting itself on my bloody carpet?

The other thing I would like to comment on is a post from James Higham who was quoting Mark Wadsworth about the lack of visitors, same here, don’t know why, but James thinks it could be down to the time of year, the labour day thingy in the USA or various other reasons, the reason for myself not visiting is procrastination, tiredness, time-or the lack of it and a very bad memory.
But it does make you think doesn’t it?
Personally I blame the Government, everything is their fault, the blogosphere, the economy, the cost of everything, the weather and global warming. 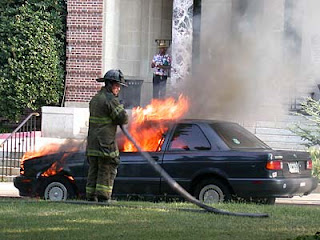 An Illinois woman who decided the best way to check the level of combustible fluid in a petrol can was by using a cigarette lighter, ended up with a torched car and second-degree burns.
According to the Chicago Sun-Times, the unnamed 27-year-old woman was in a gas station in Joliet last week and "was filling up a gas can, which was sitting on the passenger seat of the car", as police later explained.
The cops continued: "She then used a lighter to observe how full the can was."
The petrol duly ignited, the can exploded and "apparently afraid that the fire would spread to the gas pump she had been using, the woman began to push the burning car".
Firefighters arrived to find the vehicle ablaze about five feet from the pump. The woman was treated at the scene for "second-degree burns to her right wrist and right thigh", and was later admitted into hospital with serious but not life-threatening injuries

And was made to take an IQ test. 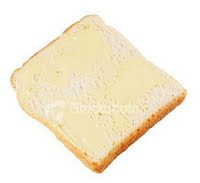 SOME women believe bread, cling film and chicken skin can be used as contraceptives, a poll by a healthcare giant revealed yesterday.
The survey of 1,000 women aged 18 to 50 unearthed a number of misconceptions about family planning.One in five detailed bizarre methods of contraception, including eating garlic or using bread, plastic wrap or chicken skin as a barrier metho
The poll, carried out by Opinion Health for drug manufacturer Bayer Schering Pharma, also found a number of misunderstandings about the contraceptive pill.

Half of those surveyed wrongly thought that taking the pill long-term could cause infertility, and 10 per cent said that it would always take a number of years to regain fertility after coming off the medication.

More than a third thought that the greatest risk of getting pregnant while taking the combined contraceptive pill occurred in the middle of a pack, when in fact it is at the beginning and end.
Dr Annie Evans, women's health specialist at the Bristol Sexual Health Centre, said: "It is not surprising that this survey has uncovered how widespread contraceptive myths still are in this country.

Britain continues to have the highest unintended pregnancy rate in Europe, with as many as 50 per cent of births being unplanned. It is vital that women are made aware of the facts, using the credible sources of information available to them.

"One thousand women aged 18 to 50 were polled online in May.

Now, is that bread with butter or without? 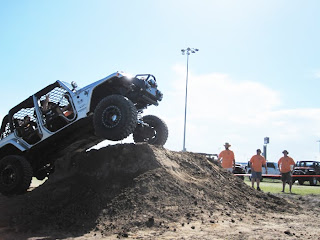 NEW YORK - Police say a drunken driver sped through a stop sign and hit an earthen mound before going airborne and smashing his Jeep into the second floor (that’s the first floor in the UK) of a New York home.
The spectacular wreck happened just after midnight Saturday in East Moriches on Long Island.
The Jeep ripped a giant hole in the side of the house, then fell into a foyer on the first floor. It came to rest on its rear end with its headlights pointing skyward.
The only person home at the time was asleep on the couch on the first floor. He was not hurt.
The 20-year-old driver suffered minor injuries. A passenger walked away unscathed.
Suffolk County Police charged the 20-year-old with driving while intoxicated, reckless endangerment and criminal mischief.

How about charging him with illegal demolition. 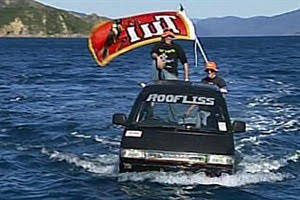 Two men have successfully crossed Cook Strait in an amphibious van.
Aeronautic machinists Adam Turnbull and Dan Melling made the nearly 10-hour trip in a 1990 four-wheel-drive Toyota Tarago van they converted last month.
The men had expected to arrive an hour earlier, but said they had decided to pass on the northern side of Mana Island to avoid choppy conditions to the south.
Overall conditions had been good and dolphins had joined them on the journey, they said.
There had been doubts about the viability of their attempt and in response Mr Melling told stuff.co.nz: "Not many people would have taken a van across the Strait, so until you do, you don't know, do you?"
Mr Melling said they had come up with the idea after seeing something similar on television.
"We sorta mucked around, put a prop on the back of it - front wheel drive on the land and rear wheel drive on the water," he told Radio New Zealand.

Jezza, Hamster and Captain Slow you have a lot to answer for. Top Gear - Crossing the Channel

There is no justice 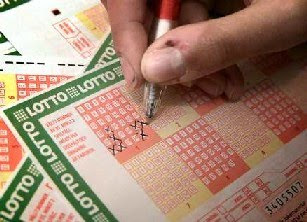 An illegal immigrant who scored a big win with a lottery scratch card in Sweden has appeared on television to collect his winnings even though authorities have been trying to deport him.
Tesfaldet Tesloy, a 28-year-old Eritrean who has lived in the immigrant-friendly Nordic country for six years, won a tax-free prize of 1.2 million Swedish kronor ($198,000).
But Sweden's attempts to deport the man have failed due to his country's refusal to take him back, highlighting a common problem for immigration officials.
Sweden says it has about 12,000 people awaiting deportation. Of those, Tesloy is one of hundreds living illegally in Sweden who cannot be sent home because their home countries refuse to have them back unless they agree to being deported.
Countries such as Iran, Cuba and the east African nation of Eritrea all ignore or refuse to cooperate with the deportation orders, leaving the immigrants stuck in a legal no-man's land.
One immigration official described the deportation process as "difficult", since few immigrants who come to Sweden seeking political refuge can be convinced to leave voluntarily.
"They are not allowed to be here ... and we are unable to deport them, and they won't leave voluntarily," Leo Garpenhielm at the Stockholm County Border Police said.
While Tesloy's lucky lottery break was deemed legal by the Swedish National Lottery, he is not allowed to work in Sweden but said he has now plans to become a licensed physical therapist.

I know how the Swedish Government feels, we have the same problem here.