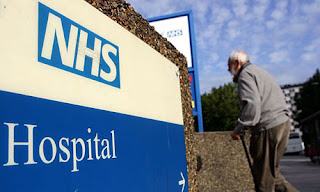 From the Telegraph Patients rushed to hospital with suspected cancer are having their treatment delayed so that managers can meet Government targets, an NHS investigation has found.
People arriving at Accident and Emergency departments with symptoms which could indicate the aggressive spread of the disease are waiting weeks for diagnosis and treatment while “routine” cases are prioritised.
Hospital managers told researchers that treating desperately sick patients more quickly would “reflect badly” on their performance against Government cancer targets which only cover those referred to specialists by GPs.
Doctors, patients groups and politicians were appalled by what one described as a “breathtaking admission” which confirmed their “very worst fears” about how far the NHS target culture has gone in distorting clinical priorities.
Although most people with suspected cancer are referred to hospitals by their GPs, more than 30,000 people diagnosed with the disease each year are first alerted to tumours by violent symptoms, such as seizures, vomiting and jaundice, which cause such alarm that patients go straight to their local A&E departments.
The report by the NHS Institute for Innovation and Improvement, an official health service agency which issues advice to hospital managers, says that many of these emergency patients waited six weeks or longer for basic tests.
It said they were “often” not given the same priority as patients who had been referred by GPs, who were covered by two targets, ensuring that they see a specialist within two weeks, and start treatment, following diagnostic tests, within two months.
“As a result, they can end up with a very poor experience before finally receiving a diagnosis and the right care,” it warns.
The report, due to be published tomorrow added: “Many trusts recognised the need to get some patients in this group onto the same pathway as people on the cancer two week wait [target] but were concerned this would reflect badly on their cancer figures”.
Some A&E departments failed to recognise the risk of cancer in seriously ill patients. In cases where the disease was suspected, patients were sent home to wait six weeks or longer for diagnostic tests. Others waited weeks on wards before seeing a specialist or having scans, the report, which is endorsed by the Government’s cancer tsar, found.


Been there done that with Mrs A, who was actually in hospital when they failed to diagnose cancer, six weeks is nothing, try SEVEN MONTHS, the trusts seem to have this “give up” attitude when faced with a patient who has cancer and has not been referred by their GP because the figures only relate to GP referrals, there are no guidelines for those who are already in hospital for something else or drag themselves to A&E and there is no comeback against the trusts because the NHS only considers that you have cancer if you go through the “official” channel-your GP.

Sadly this article is all too true, targets are more important than patients.

NHS Behind the headlines
Posted by Angus Dei at 12:28 0 comments