Misty drizzly stuff, not a lot of warm and even less solar stuff at the Castle this morn, spent the last few days doing absolutely bugger all, a bit of chillaxing, even more sleeping and watching the box in preparation for my assault on Rushmoor Borough Council’s council tax thingy.


They sent me the expected bill on Saturday demanding an amount of loot almost equal to Cyprus’s national debt, and as from the 6th of March as I am entitled to “Pension Credit Guaranteed Credit” I decided that they can shove their piece of un-recycled paper up their rear exit.
So I spent the weekend going through their 145page (I kid you not) PDF document issued by said council containing things such as: 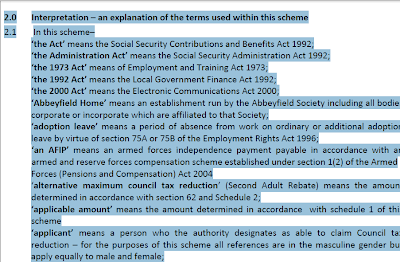 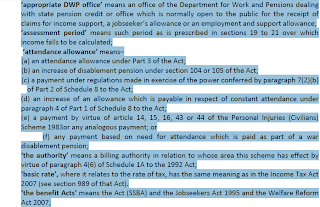 And finally came up with: 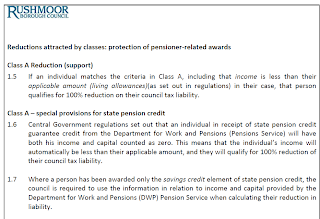 So I phoned the Council Tax help line and was told that although I am receiving Pension Credit thingy I am not entitled to a rebate until I am 65, so I read out the pertinent paragraph (above), the nice lady then put me on hold and after a while came back and told me I was correct and that the bill was a “mistake” but it was all my fault because I didn’t qualify for the Pension Credit do-dah until March the 6th and the bills were sent out “early” which turned out to be the 14th of March.


Now: I am not pissed orf about this, these things happen but what really worries me is the number of old farts that have received these bills and will just pay up because they don’t have access to the interweb thingy or are too frightened to make a fuss.

Anyway, apparently a “new” bill will be sent with the amended amount and all will be peace and harmony at the Castle again.


But remember, if you are of old fart status and in receipt in Pension Credit and you have received a demand for money-check it out with your council because you could save a lot of dosh.