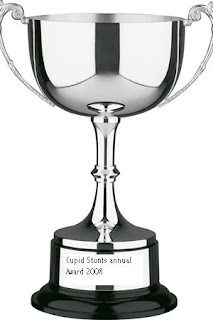 This seems to be getting a regular thing waking up with the hump.

The good bit is that I can vent my “hump” on Cupid Stunts in the news, so here goes.

What the Firk was happening? Haringey social services had 60 chances to stop this needless torture of a baby. The social services say that they were not responsible and that the “parents” were.

What a surprise, “Not our problem” they were only responsible for the care and wellbeing of this child, it wasn’t their fault, it was somebody else’s.

There were obviously serious deficiencies in the “system” that lead to this horrifying and sickening result. The caseworkers and their bosses are responsible, nobody else; they had the means to protect this child and failed miserably to ensure a safe place was found. They certainly had the opportunities to ask the right questions, what they didn’t have was the child’s wellbeing at heart.

I am awarding this YEARS “Cupid Stunts” award to Haringey Social Services, arses should be kicked and heads should roll. If I could think up a worse award I would do so but cupid stunts will have to do.


From the Times-4,000 jobs go in a day as recession bites The “caring, prudent” Government will preside over the highest unemployment figures since 1998.

And the cause? Greed, and bad management, greed by the bankers and dealers, bad management by the Government by de-regulating the financial market and doing bugger all when they knew what was happening.

But it’s ok; there will be no redundancies among M.P.’s they will continue to collect their salaries and allowances, while the expected 1.8 Million unemployed will collect about £60 per week, and have to fight for a dwindling number of jobs.

Second prize in this years Cupid Stunts award goes to Gordon brown and his band of merry men.

Again from The Times-Cancer patients sentenced to an early death by bureaucrats By Russell Miller.

This is about my old favourite-N.I.C.E. refusing to fund life saving or prolonging drugs. The “loonies” have taken over the asylum, people are dying because somebody sitting behind a big desk who probably has “Private Medical Insurance” making decisions on who and when people should live or die. And keeps saying things like-“I understand what these patients are going through” BOLLOCKS, the “boss” of N.I.C.E. has not got a clue, cannot understand and never will until he is in the position that these Patients are.

It’s the usual thing with bloody bureaucrats they see a piece of paper with numbers on it and some pillock in a pin striped suit says “That looks like a good idea” and bingo, thousands of peoples lives are firked up.

They then get in their chauffeur driven cars, bugger off home and forget.

So guess who gets equal second in this years Cupid Stunts awards, yes N.I.C.E.


And finally third prize in the Cupid Stunts awards goes to-Lawyers. Not all lawyers but the idiots who succumb.

According to a survey due out this week-shows that alcohol abuse is “endemic” and use of hard drugs such as cocaine is becoming more prevalent, particularly in big City law firms.
One partner claims he knows “people who just make a phone call from their office and nip down to reception to pick up their delivery” — something that happens in every big law firm, he claims.
The survey, by the magazine Legal Business, also says that there is evidence of “cocaine clubs” in law firms' basements and of partner-led games of poker and taking cocaine with clients. But it also finds that law firms are ignorant or indifferent to the problem. One lawyer is quoted: “I spanked £100,000 on cocaine in one year and no one noticed.”

Long hours and stress are driving lawyers to drink and drugs in and out of the workplace. Personally I don’t give a shit if they fry their brains, but I do care if they are “under the influence” while they are dealing with clients.

These lawyers of course are saying that there is no back up to help them. Excuse me but WHO is “forcing” them to drink and take drugs, I presume that they are all adults and are capable of making their own decisions. They are supposed to be professionals and I am sure that many of them have seen the result of drink and drugs during the course of their work.

The easy answer is-if you can’t do your job without resorting to drink and drugs then get the firk out of it and do something else that can’t prejudice the chances of some poor sod you are defending.

I feel much better now.