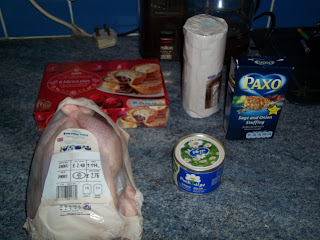 A whimsy of skywater, sod all solar stuff, even less atmospheric movement and a murmur of lack of cold at the Castle this apocalyptic morn, just returned from the stale bread, gruel and his Maj’s food run dahn Tesco. Hordes of internet robots dressed in their Jim-jams wandering about aimlessly, hordes and bit of daft old farts staggering about with a glazed look on their faces while trying to decide whether to purchase one box of mince pies for a squid or two for two squids and I have sorted my Crimbo dinner (apocalypse allowing), a chicken for £2.78 (two chicken breasts were £3.00, a box of one squid mince pies, a small tin of cream (which cost more than the mince pies), some nuts which smell like farts, a packet of biccies and a box of stuffing (I already have the parsnips, roast tatties and other stuff).


All I have to do now is try to remember how to use the oven...


Still have no land line, Orange/EE still can’t connect me to the “tech dept” because of “technical” difficulties, so I had to phone the 0844 number again and speak to three different people who live in India, the upshot is that according to the sub continent dwellers I don’t have a fault at all and a “service person” will arrive on Crimbo eve between eight of the am and one of the pm to “sort it out” which cost me £8 for 19 minutes and twenty two seconds, and apparently if the “fault” is my fault there will be a charge of £105 call out plus £55 per hour.

And now the interweb thingy is bollixed up...been trying to post this since 7.30 am... 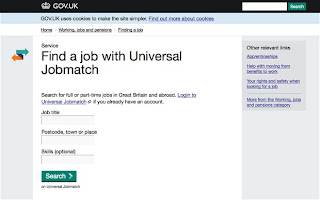 Are going to introduce “Jobmatch” for those who are not career positive, who will have their online job applications remotely monitored by the Government to see whether they are making serious attempts to find work.
Allegedly the site will scan the CVs of benefit claimants and automatically match them up with job openings that suit their skills.

It will also allow employers to search for new workers among the unemployed and send messages inviting them to interviews.

Apparently the activities of benefit claimants can also be tracked using devices known as "cookies", so their Job Centre advisers can know how many searches they have been doing, suggest potential jobs and see whether they are turning down viable opportunities.

But the tracking element of the programme will not be compulsory as monitoring people's behaviour online without their consent would not be allowed under EU law.

However job advisers will be able to impose sanctions such as compulsory work placements or ultimately losing benefits if they feel the unemployed are not searching hard enough.

The Irritable Bowel Twins, who are supposed to be the Work and Pensions Secretary, said the scheme would "revolutionise" the process of looking for work.

Super, a government computer handling tens of  thousands of job seekers details; what could go wrong? 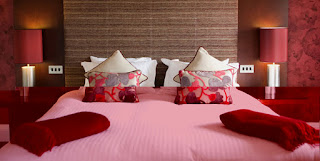 An Australian court has ruled that a bureaucrat who was injured while having sex on a business trip is eligible for worker's compensation benefits.
The Full Bench of the Federal Court ruled Dec. 13 in favour of the woman, who cannot be identified for legal reasons, and rejecting the appeal of the federal government's insurer.
The woman was hospitalized after being injured in 2007 during sex with a male friend while staying in a motel in the town of Nowra, 160 kilometres (100 miles) south of her hometown of Sydney.
During the sex, a glass light fitting was torn from its mount above the bed and landed on her face, injuring her nose and mouth. She later suffered depression and was unable to continue working for the government.
Her claim for worker's compensation for her physical and psychological injuries was initially approved by government insurer Comcare then rejected after further investigation.
An administrative tribunal agreed with Comcare that her injuries were not suffered in the course of her employment, saying the government had not induced or encouraged the woman's sexual conduct. The tribunal also found the sex was "not an ordinary incident of an overnight stay" such as showering, sleeping and eating.
That ruling was overturned in the Federal Court in 2012, when Judge John Nicholas rejected the tribunal's findings that the sex had to be condoned by the government if she were to qualify for compensation.
"If the applicant had been injured while playing a game of cards in her motel room, she would be entitled to compensation even though it could not be said that her employer induced her to engage in such activity," Nicholas wrote in his judgment in favour of the woman receiving compensation.
In the Full Bench decision upholding Nicholas' decision, Judges Patrick Keane, Robert Buchanan and Mordy Bromberg agreed last week that the government's views on the woman having sex in her motel room were irrelevant.
"No approval, express or implied, of the respondent's conduct was required," they said.


Wonder if the hotel is suing her for criminal damage?


Up to the land of lots of stuff 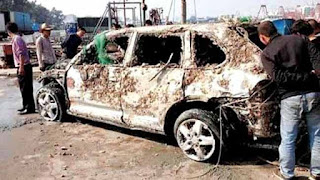 Chinese fishermen managed to haul up a Porsche Cayenne while having an angle orf the Coast of Beihai.
The Cayenne was covered in seaweed and barnacles, with its state pointing to it having been underwater for at least two years according to experts called in to assess it.
Reports on CarNewsChina.com suggest that the waters and coastal areas around Beihai are a hotspot for smugglers bringing in luxury goods to escape the huge import tariffs China imposes.
It’s believed the smuggler possibly pushed the Porsche overboard after spotting a customs patrol.
The vehicle, which would have netted the smuggler a sizable profit, sold to a Beihai scrap metal dealer for 4000 Yuan ($650).


Would have been worth more but the MOT has run out. 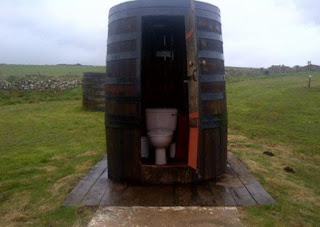 An Aberdeenshire couple, Matthew and Carol Short, farmers from Fraserburgh, won the “Home Throne” award for their “unique toilet in a whisky barrel.”
Flushed with success?


All over what will be left of the World after today 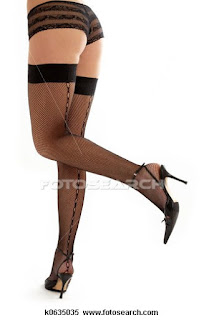 Allegedly a growing number of women are having their toes shortened or even completely removed, in order to make wearing stilettos a less-painful experience.
According to the American Podiatric Medical Association, eighty-seven percent of women have had foot problems from wearing uncomfortable or ill-fitting shoes, like high-heels. But while some give-up on the problematic footwear, others love wearing them so much they will appeal to surgical procedures such as shortening toes, receiving foot injections and even completely cutting off pinkie toes in order to make walking in them bearable.

Hint- buy a pair of shoes that actually fits.....

And today’s thought
I blame Osborne 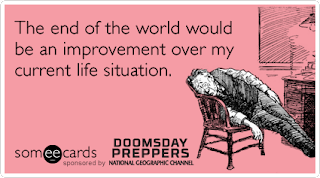