GET YOUR CHEQUE BOOK OUT 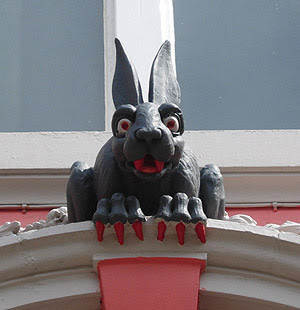 Linkenholt down here in Hampshire is up for sale, 22 cottages, a cricket club, a blacksmiths, a manor house, 1,500 acres of farmland and 450 acres of woodland can be yours for the paltry sum of around £25 million.

Well what are you waiting for?

Don’t try to boil this bunny! Sky News mad march hares have nothing on this battling bunny.

For some strange reason fluffy decided to attack the snake it discovered in its field, and won! It eventually chased the interloper up a tree.

Ah, the joys of spring.

One for the people with arachnophobia ABC News (Australian Broadcasting Corporation) German customs officials inspecting a Swiss car got a nasty shock when they discovered 164 large spiders and 45 boxes of cockroaches - the arachnids' food for the journey.

The trap-door spiders, most "as big as a fist", were found wriggling around in boxes and plastic bags, said Markus Ueckert, a spokesman for the customs office in the south-western German city of Loerrach.

"Of course, the officers didn't open anything. They knew immediately what was going on," he said.


Me? I’d have been in Austria by the time the boot lid was open!

Ananova A Hungarian bank lost more than £20,000 in cash after a security van was rammed - by a prison van full of bank robbers.

While fire-fighters rescued the Category A prisoners from their blazing van, a small fortune disappeared from the cash van as bags of currency spilled out onto the street in Budapest.

People were seen driving up and grabbing the cash before speeding off again.
And by the time police arrived the money was gone and there was no trace of the people who had taken it.

Police suspected the crash may have been organised from jail by crime bosses and carried out by gang members still on the outside.

But officers quizzed all the inmates - who were being transported from a court back to their jail - who claimed they had nothing to do with the crash.

"The bank remains very suspicious. Of all the vehicles that could have hit their van, it had to be one full of bank robbers," said a police spokesman.

And finally from the BBC Council leaders have compiled a banned list of the 200 worst uses of jargon, with "predictors of beaconicity" and "taxonomy" among the worst horrors.

The Local Government Association says such words and phrases must be avoided for staff to "communicate effectively".

LGA chairman Margaret Eaton said: "The public sector must not hide behind impenetrable jargon and phrases."

Local and central government are often criticised for their use of language.

The full list can be seen here, and include wondrous words and phrases like Bottom-Up, Citizen empowerment, Partnership working and Self-aggrandizement.

What can you say? Thinking outside of the box comes to mind.


“There is no greater impediment to the advancement of knowledge than the ambiguity of words.” Thomas Reid

NHS-THE OTHER SIDE
Posted by Angus Dei at 07:38 1 comments