We Brits have a reputation for tolerance and queuing, well not this one, at least for standing in a queue.

I went to the local smash and grab (Tesco) which turned out to be a pick and wait; I got there at 8am as usual on a Monday and am normally on my way home by 8.15.

Not today, first up there was no fresh bread, I like my crusty loaf, especially the ends, so my mood started to slip, then after getting the rest of the shopping I went back to the bread counter-still no fresh bread.

So slightly pissed off I chose a “farmhouse” loaf which is 29p dearer than my favourite, but OK that’s life, I went to one of the 30 checkouts, no one about, in the distance I could see a queue, so I walked to the end of it which was about halfway up the width of the supermarket.

It was 8.10, by 8.20 I was still in the same place, the reason? ALL THE FIRKIN TILLS WERE DEAD, the only ones working were the “self service” of which there were four and one of those was broken.

At 8.25 the management finally decided to let us know that ALL THE FIRKIN TILLS WERE DEAD, of which we were quite cognisant after queuing for 15 minutes.

And of course there was the usual dick head that thought he didn’t deserve to queue and tried to jump in at the front, I was impressed by the language used by the lady behind me, and the dick head slunk away to the end of the queue which by now was lost in the haze of distance.

By 8.30 I was about six from the front, and finally got to a checkout at 8.40, which then decided it had had enough and died.

By 8.50 I left the “every little helps” disaster and came home.

I have a few questions for the Tesco management; why oh why were all thirty tills down? Don’t you have an I.T person who is capable of ensuring that they work?

Why did you allow the store to open when you firkin knew that the tills weren’t working? So that we could either go somewhere else or come back later?

Why did you allow hundreds of customers to be treated like cattle, while your store management walked about with their clip-boards instead of helping on the three/two tills that were working?

It seems that profit comes before all else at Tesco’s, it seems that customers are only there to fill the tills (or not as the case may be) it seems that next week I will be going to ASDA or maybe Sainsbury’s which is closer and you don’t have to pay for parking.

And I don’t give a shit if the Tesco photo is copyright, just get it right.

Rant over, at least until next week.
“Too many people spend money they haven't earned, to buy things they don't want, to impress people they don't like.” Will Rogers

NHS-THE OTHER SIDE
Posted by Angus Dei at 09:26 0 comments 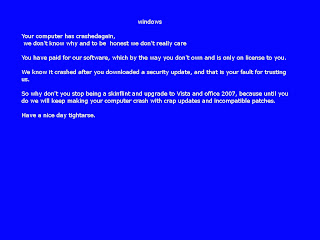 It has happened again, I am thinking of commiting computercide, I hate Microsoft, I hate windows and I hate the bastards that dream up the useless "security updates"