Last night was about a 7.5 on the Bribble factor scale, woke up with my head off the pillows and my right leg hanging out of the bed, the duvet was on the floor and the cat was asleep on my pillows.

Must have been worrying about something; probably being Bribbled.

I am thinking of producing a new dictionary based on my warped view of the world, watch this space, well not this exact space but you know what I mean, don’t you?

Watch this video there’s nothing like a big bang to cheer up the day.

And the no knobs in the Gov have decided that kids should be given careers advice at the age of ten or less.

Most kids of that age are more concerned if they have the latest video game or the “right” trainers as well as how they can get onto the X Factor of course. 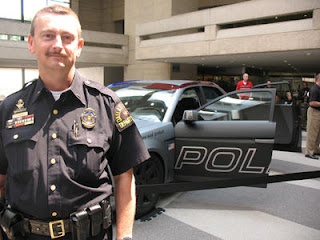 From across that big wet salty thing: A US police chief has apologised after at least 39 people received traffic tickets because they couldn't speak English.

"I was surprised and stunned that that would happen in the city of Dallas because we are a very, very diverse city," Dallas police Chief David Kunkle said.

"I apologise to the Spanish speaking, Hispanic community."

The incident came to light after a woman went to court to challenge a ticket issued by a young officer which cited her for being a "non-English speaking driver".

Kunkle said his department reviewed its records and found that 38 similar tickets had been written in the past three years by six different officers.

All fees will be refunded and the police will ask for all convictions to be reversed, he said.

The department is also considering dereliction of duty charges against the officers involved and the sergeants who reviewed the citations.

Kunkle said the misunderstanding of state law could have stemmed from an effort to shift to an electronic citation system.

Lists of citations were distributed which included a federal statute which requires drivers of commercial vehicles to have sufficient proficiency in English to operate the vehicle safely.

"As far as I know with our commercial vehicle enforcement we've never written any citation according to the federal statutes," Kunkle said, adding that the police department does not have the capacity or desire to test English proficiency. 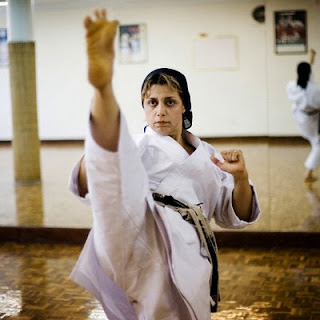 A 20-year-old German woman was one of a group of tourists attacked by several people on the Wills Terrace footbridge on Saturday evening.

But Superintendent Sean Parnell told 783 ABC Alice Springs the woman was a black belt in karate.

"The victim there managed to punch one of the offenders three times in the face with a karate chop," he said.

"And they then attempted to run away and these baddies chased them and she's swung around and given them a kick to the side of the head and a couple more karate chops and they've run away."

He says she may have injured at least one of the attackers while fighting off the assault.

"We believe that, given the force she's hit him with, that he may have some injuries," he said.


That is not the lady concerned in the pic, by the way. 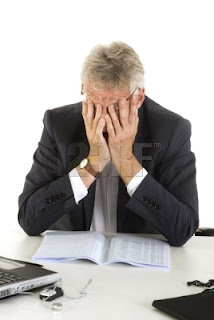 Today will be the most unproductive day of the year, according to a survey, as workers' morale is hit by the darker evenings brought on by the clock change.

Researchers found productivity will drop by 50 per cent this week as depressed staff around the country struggle to come to terms with the dark nights closing in.

A staggering 52 per cent of workers admitted they will struggle to get to grips with their work-load today.

Worryingly for employers, eight per cent even admitted to phoning in sick because they were so depressed at the thought of going to work amid the shorter, darker days.

The stats emerged in a study of 2,000 workers by Promotur, The Canary Island tourism board.

''They can affect your work performance by making you unable to concentrate and carry out your normal routine, your relationship by affecting your libido and your social life by making you feel irritable and anti-social.


Just another normal day then. 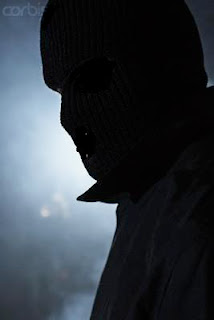 A bank robber in Modesto, California, forgot to cut holes in his mask.Witnesses said he held up the bottom of it so he could see but even then he had to walk with a shuffle.

Police say he still managed to escape with cash and was last seen driving away with an accomplice.

He is described as wearing a pink shirt, large white gardening gloves and tight jeans, reports the Modesto Bee.

Detective Thomas Blake said: "As he rushed to leave the building he forgot which side the door hinges were on, walked into the steel door frame, banged his head and knocked his hat off."


Tomorrow or not as the case may be 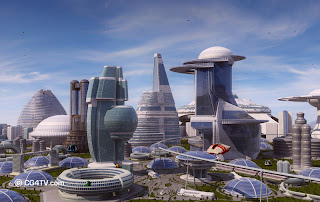 Futurologist predicts the trends that will shape the next 50 years.

What's going out and what's coming in?

Going out: • Proper spelling • Driving on the road for free • Desktop computers • Work-free weekends • The Maldives • Paris Hilton
Coming in: • Hydrogen-based fuel stations • Offshore prisons • 'Mindwipes' to remove the memory of a bad day at the office • Sensory internet

Going out: • Banknotes and wallets • Petrol engines • Addiction and deafness - both will be cured • National currencies • Free public spaces • The idea of saying 'sorry' • The European Union
Coming in: • Factories in space • A single global currency • Wallpaper that plays videos • Countries used entirely as prisons

Going out: • Any remaining monopolies • Ties • The British monarchy • Natural childbirth
Coming in: • Individual taxes based on the amount you pollute • Invisibility cloaks • A man on Mars

Going out: • Household chores • Belgium as a unified country • Incurable blindness • Google • Any survivors of the Second World War
Coming in:
• Tiny robots for pest control • Brain transplants • Downloading of memories • Global ID cards, elections and taxes • Warp drive • Robot policemen
and beyond...
Going out: • The idea of ugliness • Nation states • Death - unless you want it
Coming in: • Artificial brains • Mining asteroids • Web 4.0 • Clothing that monitors and controls your stress levels

So what’s going to change then? Mind you I do like the idea of an invisibility cloak.