The Edge of Reason: How to swallow a football: Rodney Hamilton: Woman on an ‘Orse: Heaven exists: and a Giant Hamster water wheel.


Did a bit more putting coloured stuff on me and the floors, I even managed to get some on the walls yestermorn, having a day orf today to rest my poor old knees.

Up in the place where they speak Brummie 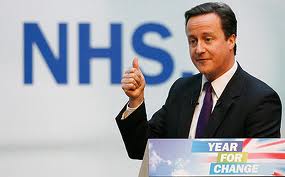 It seems that U-Turn Cam is going to let us know that Blighty is about to slowly sink into the Norf sea unless we come up with the core values of “hard work, strong families, taking responsibility and serving others”.
Allegedly shit for brains Dave will say: “Unless we act, unless we take difficult, painful decisions, unless we show determination and imagination, Britain may not be in the future what it has been in the past” at the CONTory gathering.


Apparently the Prime Monster reckons “The truth is this, we are in a global race today and that means an hour of reckoning for countries like ours. Sink or swim, do or decline.”


And Cupid Stunt Cameron will claim that “it’s not complicated” to tackle the major economic problems, providing the set of core values are followed and there is determination to act. He will also stress that Britain faces a bright future amid signs that the economy is finally beginning to heal.


Plan “A” didn’t work, plan “A”+ “a” isn’t working and Plan B to Z won’t work either because there is a slight flaw in the CONS cunning plan.
By taking money away from the electorate whether it be in benefits, pay cuts, pay freezes, extra taxes and price rises in travel, go juice and fuel the economy will not grow, if we can’t buy things/services companies will lose money, staff will be made redundant, welfare costs will rise and the extended recession will continue.


Those who have work are already working hard (for less pay), there are millions out there who give time for nothing by volunteering, those without work are trying to exist on the pittance handed out by the Irritable Bowel Twins while housing benefits are declining faster than U-Turn Cam’s rating and finding out that there aren’t a lot of jobs going round (graduate takes job as a scarecrow), the retired are concentrating on keeping warm and feeding themselves rather than buying a nice new 3d TV/furniture/car/gadgets and giving the economy a boost.


The banks have Billions of our loot, a large proportion of which is being used to repay the rip orf PPI thingy, while Son of a B.......aronet George (alien reptile in disguise) Osborne is intent on lowering our standard of living to that of Eritrea.

Up in the ‘Ackney part of the Smoke 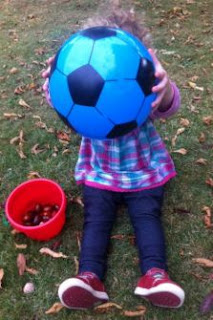 A sports firm is warning that a football bigger than an adult's head could be a potential choking hazard to young children.
The flyaway plastic balls come with the caution: 'Warning! Not suitable for children under 3 years. ‘Choking hazard.'
Irish manufacturer Bellco Sports has defended the warning, claiming it is required under by EU health and safety laws. 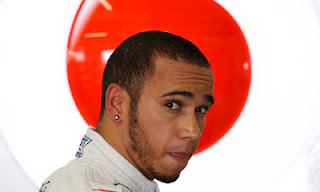 Formula One driver Lewis Hamilton has been forced into an embarrassing climb-down, after accusing his British teammate of showing him a lack of respect on Twitter.
The 27-year-old, who has incurred the wrath of officials at McLaren for his use of the social micro blogging network, condemned Jenson Button for apparently “unfollowing” updates from his account on the site, describing it as a “shame.”
However, after realising Button had not been following him in the first place, Hamilton issued an apology and said he would try to log on more frequently in future to avoid making a similar mistake.


What a Rodney-Good luck Mercedes...


West to the place where corn is very expensive
Police were dispatched after a report of a bull on the loose headed eastbound in Des Moines, Iowa Monday afternoon.

The bull was spotted in the area near the intersection of Southeast 30th Street and Scott Avenue, which is near the Iowa State Fair.


Five horseback riders and four dogs were called in to help search for the bull after it disappeared into a cornfield.


One rider could be seen almost gliding above the cornfield as she stood on top of her horse as it moved through the field. 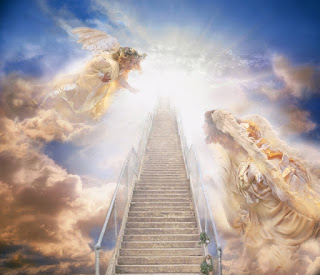 Apparently there is a heaven; Dr Eben Alexander, a Harvard-educated neurosurgeon, fell into a coma for seven days in 2008 after contracting meningitis.
During his illness Dr Alexander says that the part of his brain which controls human thought and emotion "shut down" and that he then experienced "something so profound that it gave me a scientific reason to believe in consciousness after death." In an essay for American magazine Newsweek, which he wrote to promote his book Proof of Heaven, Dr Alexander says he was met by a beautiful blue-eyed woman in a "place of clouds, big fluffy pink-white ones" and "shimmering beings".


I’ve been there mind you it was after having a few mushrooms with my bacon and eggs....


Back to the land that inspired the American “language” 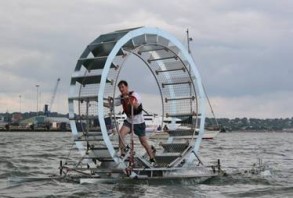 A Wiltshire man has abandoned his bid to walk across the Irish Sea, after his giant floating hamster wheel sank.
Chris Todd, from Bromham, gave up 10 hours after starting out from north Wales for the Irish Republic when the rudders on his "Tredalo" failed.
He planned to try again, but the Tredalo broke up and sank in heavy seas as it was being towed back for repairs.
"So I'm afraid I don't have the Tredalo any more - but I've solved the problem of where to store it," Mr Todd said.
It took the 35-year-old engineer just under a year to build the raft in his back garden.
Mr Todd had hoped to make the crossing from Trearddur Bay near Holyhead to Greystones Harbour by walking the wheel for up to 48 hours

Knowing that has enriched my life...

That’s it: I’m orf to try out a dog’s breakfast 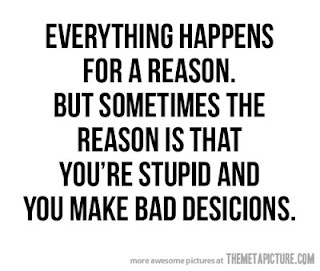