Baarmy price for sheep, Two screen laptops, intersexuality, “victim” MPs and what is a Numpty?
All change for today, some “proper” news (well sort of), and as I use the word ‘Numpty’ a fair amount I thought you would like to know the definition.

The price of lamb has just gone up 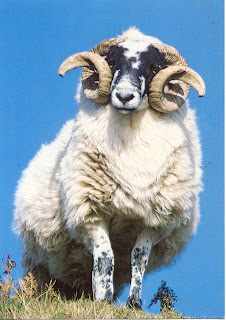 A sheep has sold for a world record £231,000 at a Scottish livestock auction.
Deveronvale Perfection, right, a Texel breed admired by his new owner for his "great body and strong loin", will be used for breeding.
Experts are predicting the tup, the farming term for an uncastrated sheep, will prove a bargain over the long term for his new owner.
"It comes down to genetics," British Texel Sheep Society chief executive John Yates said on the society's website.
"Breeders are looking at the decades of sheep that this bloodline can produce."
Graham Morrison, the former owner, said the price surpassed his wildest dreams.
Farmer Jimmy Douglas, from Cairness, Scotland, who forked out the record amount, was quoted as saying Perfection was the best he had ever seen, with great strength and an "incredibly chunky stature".
The price achieved at the sale at Lanark market surprised onlookers, "but when breeders see the 'perfect' ram, they will stop at nothing", Yates said.

Who said farmers were poor nowadays.


Twice as many problems 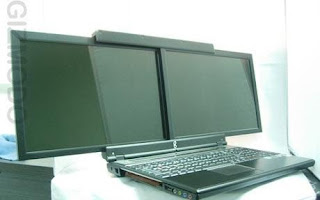 The pioneering PC, known as the Spacebook, is the brainchild of Alaska-based technology firm gScreen.
While growing numbers of office workers – especially in the financial industries – use several desktop monitors to track many programmes and information sources at the same time, no manufacturer has yet released a portable equivalent.
The gScreen Spacebook will boast two 15.4 in screens which can slide away to fill the space of a single screen when the laptop is being stored or transported.
The first photos of the pioneering gadget have been obtained by Gizmodo, the US technology website.
Gordon Stewart, the founder of gScreen, told the website that the first Spacebooks should be available on Amazon by December this year, once final modifications are complete.
"We designed this knowing that many may not need the extra screen at all times," he said.
The dual-screen laptop is aimed at professional video editors, photographers and designers who need to flick between different applications to carry out their work.
But anyone willing to meet the expected $3,000 (£1,835) price tag should be warned that the double screen is likely to push the weight of the Spacebook significantly above standard laptops.
The energy demands of running two monitors will also prove a drain on the computer's batteries.
Other technology firms have produced laptops with smaller bolt-on second screens, but this is believed to be the first model with twin monitors of equal size.

Nuts or no nuts 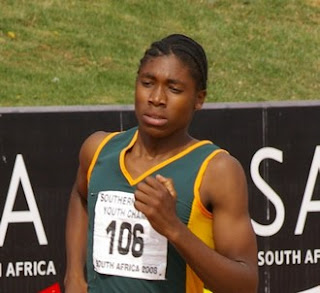 Why all the fuss, does the IAAF have a monopoly on sex? Their own eligibility rules states “An athlete is eligible to compete if HE agrees to abide by the rules and has not been declared ineligible”, after all how important is running around?
And after all it isn't as if she did it on purpose.

Oh woe is them

Members of Parliament whose controversial claims for accommodation costs, food and furniture were exposed during the expenses scandal are using an official inquiry to claim they were victims rather than offenders.
Several politicians revealed by The Telegraph to be taking advantage of their parliamentary remuneration have attempted to justify their behaviour to the Committee on Standards in Public Life.
Across hundreds of pages of submissions to Sir Christopher Kelly, the committee's chairman, MPs:
• Expressed continued resentment at the public's anger over the abuse of expenses.
• Accused Commons officials and Government ministers of encouraging them to "milk" the system.
• Continued to argue that they should be allowed to sell taxpayer-subsidised homes at a profit.
• Insisted they should be allowed to employ family members.
• One backbencher said he should not even be required to submit receipts for expenditure and claimed: "This makes MPs into petty accounting clerks."
Among those who made submissions were Adrian Bailey, the Labour MP for West Bromwich West, who claimed 77p for a light bulb and £1.65 for shampoo. He wrote: "Even the most legitimate and necessary items of expenditure are now represented as some sort of outrageous claim on the public purse."
Eric Illsley, Labour MP for Barnsley Central, who claimed the maximum £400 a month for groceries, said: "It cannot be right to maintain that MPs should not have claimed this money after being encouraged to do so by the Fees Office."
Alan Simpson, the Labour MP for Nottingham South, who claimed the maximum second home allowance, blamed ministers, stating: "It was the Government that began to use MPs' allowances as a form of back-door pay." The submissions are likely to provoke renewed anger in the run-up to the party conference season.

Poor little souls, there is an alternative for these “victimised” men and women of course-RESIGN

Are you a Numpty?

Numpty
Deriving most probably from a combination of an abbreviation of the word numb (meaning deprived of feeling), numskull or numbskull.
A Numpty is a person who is, by their own actions or statements, demonstrably preoccupied, forgetful, naive or stupid in some regard. It is perfectly possible to be highly skilled or educated to a greater degree yet a complete Numpty when it comes to certain aspects of one's life.
The term is at the lesser end of insults and may generally be used amongst friends without causing too great an offence, especially if the recipient of the term has already shown the deservedness of its attribution.
A Numpty may otherwise be known as an - Idiot - Idjeet (Scottish) - Halfwit - Numbskull - Dumbass - Moron - Bozo - Twit – Spaceman

I am sure you will be able to think of more.