Good morning all, I don’t expect that you have missed me but I have been away for a few days to somewhere warm and sunny-Welsh Wales to visit my sis and hordes of great nephews, nieces and future great-great nephews and nieces.
The weather at the Castle is warm-ish, sunny, calm, and the garden has grown beyond recognition in the last four days, there is some good news and some bad, but I will go into that later in the week.
I haven’t been near a computer for a while and have not watched the TV for days but here are some “news” items that caught my eye, and apologies for not visiting, commenting, or replying. 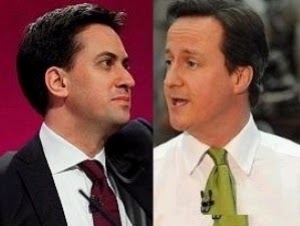 Apparently the Alternative Vote thingy has finally lifted off as Piss Poor Policy Dave C and Clone B (Ed millipede) go at it.
In a sign of how the campaign has driven a wedge through political parties across Westminster, Mr Miliband shared a platform with business secretary Vince Cable as well as representatives from trade unions and the Green party.
Meanwhile, David Cameron conducted an event with John Reid, former Labour home secretary.
I know which way I will be voting; hopefully the outcome will be very interesting. 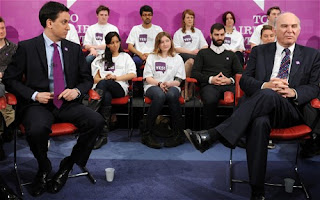 And Three Core Vince Cable has said that he doesn’t care if he is sacked over the AV thing.
Neither do I.
West even farther than Welsh Wales

A man caught fire Wednesday evening inside a San Francisco porn store and was fighting for his life in the hospital after suffering third-degree burns, KCBS-TV reported.
Arson experts said it was not clear what ignited the fire but police said the man had been watching videos in a private booth when the blaze erupted.
The man ran out the front door of the adult arcade "engulfed in flames" and was spotted by police standing across the street, a police spokesman told KCBS.
"He came out of the building already on fire," Lt. Kevin McNaughton said.
Fire fighters, who luckily were only about a block away on an unrelated call, raced to the scene and doused the flames.
Must have been really hot stuff.
Down a bit to Bristol 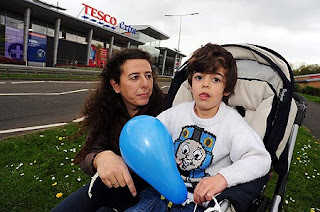 My favourite retailer asked a mum to leave a Tesco store – because her toddler son came in with a balloon.

Dr Alicia Chrysostomou, a rubber and plastic expert, was stopped by a security guard while shopping with Sebastian, three, in his pushchair.
He said balloons were banned because they could cause a reaction if they brushed against someone with a latex allergy.
When Alicia protested she was allowed to remain, provided she removed the balloon from the handle of Sebastian’s buggy and he held on to it instead. She says the guard failed to mention the bizarre policy was in place because a member of staff at the store has a severe latex allergy.
Alicia, 44, who has a PhD in polymer engineering, said: “I’ve never heard of anyone having such a reaction that they couldn’t even walk past a balloon. Sebastian was sitting quietly with it tied to his pushchair – it’s not as if he was running amok.”
She says balloons were on show in the entrance to the Tesco Extra store at the Willow Brook centre in Bradley Stoke, Bristol.
Alicia added: “This really was health and safety gone mad. A crowd gathered with people muttering and staring. I felt like a shoplifter or something.
“If it was such a problem why not tell me as I came in rather than chase me through the store and make a scene?”
A Tesco spokesman said: “A member of staff has a severe latex allergy so we ask customers not to bring balloons into the store. There is signage at the entrance and we’re sorry for any inconvenience this may cause.”
Tesco balloon bollocks.
East a lot of non metric units 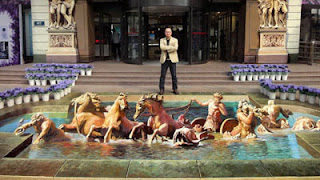 A Chinese artist, who created the world's largest 3D artwork, has created another 3D work in Shanghai.
Qi Xinghua created a 100 metre square 3D painting, the Victory Door, in front of Oriental Plaza in Shanghai, which will stay on display until next month (May).
Qi created an 892 square meter 3D painting this February in Guangzhou, southern China's Guangdong Province, and it was acknowledged as the world's largest 3D painting by the Guinness Book of Records. 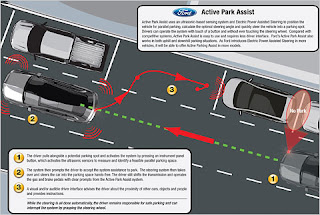 A Northern Territory woman's disastrous attempts at parallel parking have helped land her behind bars.
Darwin police say someone rang them after seeing the woman battling to park at the waterfront suburb of Cullen Bay just after midnight.
Police say the woman damaged another car and a gate in the process.
They say she had been drinking and was held in custody at the city watch-house while the incident was investigated.
I’m saying nothing……
And finally:
Right a bit to the land of tall people and wacky baccy 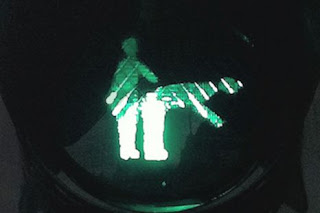 Red-faced traffic bosses are investigating how pranksters altered a set of pedestrian lights to show a couple at it whenever they turned green.
The lights - in Nimwegen, Holland - literally stopped the traffic when passers by stopped to gawp at them during rush hour.
One officer said: 'People kept pressing the button to see the couple having sex and of course every time they did, the traffic had to stop suddenly. We had quite a lot of rear end shunts from drivers who were too distracted.'
Transport officials are investigating how computer hackers managed to get into the town's traffic light system to manipulate the image.
A Town Hall spokesman said: 'We are looking at who had access and opportunity.'

Rear end shunts about sums it up.
That’s it: I’m orf to probe Gravity
And today’s thought: "Always go to other people's funerals, otherwise they won't come to yours" - Yogi Berra.
Angus
Posted by Angus Dei at 08:06 2 comments