Part time business Duck and Duckess: Behave-or else!: Smoke gets in your ears: Flogging brats: Time and tide...: and the 14th Boryeong Mud Festival.

There is a touch of mist and mellow fruitfulness at the Castle this morn, the study is still empty, the sky water has made the garden behave like a bunch of Triffids and I am fed up with hearing about Rupert the bear and news international. 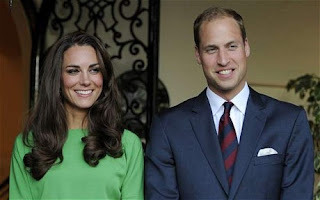 Allegedly the Duck and Duckess of Cambridge are to become 'ambassadors' for British business, undertaking future royal tours to boost the country's commercial interests abroad.
During their three-day visit to California earlier this month, the Duck and Duckess attended an event organised by UK Trade and Investment (UKTI) in support of British technology investments and the development of east London's "Tech City" into a world-leading area for technology and software design.
Oh well, that gives them the experience they need then....as long as they don’t have to “work” more than two weeks in a row.
According to the House of Lords 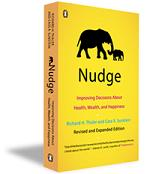 "Nudging" people into healthier behaviour, as the government aims to do, will not work without the threat of regulation, according to a House of Lords committee that is critical of attempts to curb junk food and alcohol consumption through voluntary agreements with food and drinks companies.
Regulation should never be ruled out by government departments involved in trying to influence behaviour change, says the report. It criticises the recent attempt to engage the food and drinks industries in tackling excessive drinking and obesity through a "public health responsibility deal", in which they pledged to make healthier products and market them more carefully.
The committee also recommended more research should be done to find out how best to reduce people's use of cars for medium and long journeys. It urged the department of transport to consider regulations and financial penalties in the attempt to cut car use. It wants the government to set public targets for reducing carbon emissions from car use and announce the steps it will take if a re-education does not come about through voluntary means.
When does the “elected” house of old farts come in?
Apparently passive smoking nearly doubles a teenager's risk of hearing loss, research reveals.

Investigators say the findings, from a study of over 1,500 US teens aged 12 to 19, suggest that second-hand tobacco smoke directly damages young ears.
And the greater the exposure the greater the damage.
Often it was enough to impair a teen's ability to understand speech, Archives of Otolaryngology - Head & Neck Surgery reports.
It is still unclear how much exposure could be harmful and when the damage might occur.
In the study, around 40% of the 800 teens who had been exposed to second-hand smoke had detectable hearing problems, compared to about 25% of the 750 teens who had not had this exposure.
So, if you smoke and your teen ignore you it’s your own fault.....
Dahn Unda 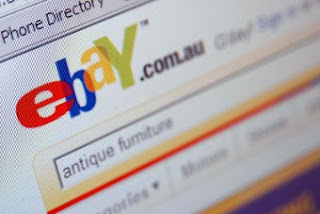 A Geelong, Australia, woman could lose custody of her children after she tried to sell them on eBay, official say.
The woman, who is in her 30s, put photos of her son and daughter, both under 10 years old, last week, apparently as a joke, the Geelong Advertiser reported Monday. The listing was online for one day last week, and was taken down after police contacted eBay.
The police believed the woman's excuse that the listing was a joke and did not press criminal charges; however, the Department of Human Services is still investigating her actions.
"We are conducting an investigation to ensure the children's welfare and safety are taken care of and looked after," a human services representative said. "If it is deemed severe and the children were at risk then yes, that would be the case [taking the children off the mother]."
Child advocacy groups are outraged by the stunt.
"I think it's a fairly twisted sense of humour. It's a sick joke and it's distasteful," Kevin Zibell, president of Centre for Excellence in Child and Family Welfare, said.
She would have been better orf asking for a swap....
Back in broken Blighty 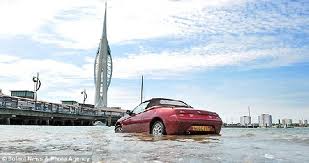 A sports car was carried away by the tide after its owner left it on a slipway to dodge a £2 parking fee.
The Alfa Romeo Spider was parked on a restricted area used by fishermen.
The driver left it at The Hard in Portsmouth at 8.30am on Friday before getting a train to London with the only set of keys.
But it was swamped by the tide at 12.20pm.
A car park opposite charges £2 for the day.
The unnamed owner’s son-in-law, Steve Sterling, said: “The car is his pride and joy. He’ll be upset.”
Serves the tight git right....

And finally:
Over in Sarf Korea 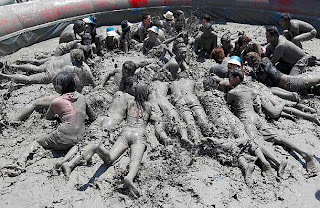 The Boryeong Mud Festival, at Daecheon Beach, features wrestling, sliding and even a contest to crown a mud king.


Thought it was Glastonbury for a second, but there is not enough mud.


That’s it: I’m orf to check the moat for lost landscapes.


And today’s thought: "Being a Scientologist, when you drive past an accident... you know you have to do something about it because you know you're the only one that can really help." - Tom Cruise