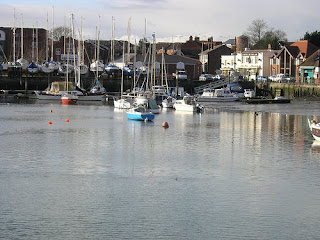 But I have returned from my epic trek to Fareham down in darkest ‘Ampshire, showing fortitude and even fiftytude in my gallant attempt to brave the worst that Jack Frost and Mr. Snow threw at me after having to stop every ten miles to wipe the salt from the windscreen due to the washers being frozen up I arrived safely, and even found a free parking space. Without the sat nav directing me into the sea.

I arrived a little early and as most men do scouted out the nearest toilet, which happened to be almost in Portsmouth, but lighter by half a gallon and having had a three mile walk I decided to imbibe in a coffee and a sausage roll, and sat down to enjoy my feast when a Jazz quartet turned up and managed to make my ears bleed with the volume.

However I did finally get to meet four very attractive ladies, from the blogosphere and a couple of hours was spent shouting over the background noise at Cafe Nero, email and phone numbers were exchanged and a well spent morning sadly came to an end.

So it looks as if you will have to put up with me for a while longer.