Not a lot of light stuff at the Castle this morn, the liquid metal in the gauge has descended to a more reasonable level, the garden is in need of a fettle-again and his Maj has discovered the joy of vanilla ice cream.
Not sure if there will be a post tomorrow-I have an early appointment with the tooth puller, hence the rather endless rambling today.

All across not well Blighty 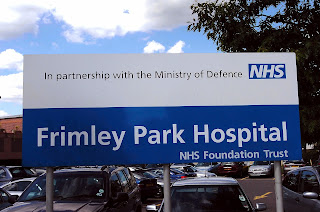 And apparently over the seas our dear old NHS is still being “Reformed”, it seems that high-profile NHS hospitals in England are to be encouraged by the government to set up profit-making branches abroad to help fund services in the UK.
An agency will aim to link hospitals such as Great Ormond Street with foreign governments that want access to British-run health services.
Investment would have to be drawn from hospitals' private UK work, but with profits ploughed back into the NHS.

Meanwhile, before the Health and Social Care Bill actually passes into ignominy in the leaning tower of Westminster tonight NHS trusts have been pre-empting the “reforms”.
Thousands of staff have already been laid off, meaning the existing management bodies - primary care trusts - have had to merge during the transition.
At a local level, GPs have been forming themselves into groups - known as clinical commissioning groups - for the past 18 months. They will be the bodies that take responsibility for spending 60% of the NHS budget.
There are now 240 of them, although that could change if some of the smaller ones merge as has been happening in the past few months.
1 April (vey apt) 2013 marks the day the new NHS is born. Strategic health authorities and PCTs will be abolished, leaving the GP-led groups and the national board to take on their full functions.
However, the board will retain ultimate responsibility for the budget for those groups which have not been authorised to take full control of the purse strings.
Meanwhile, local authorities will take control of public health - something they used to do up until the mid 1970s.
This will mean directors of public health, currently employed by PCTs, will move across to local government and, on a practical level, schemes designed to encourage healthier lifestyles will be organised by local councils.
A new body, Public Health England, will be created within the Department of Health to take a lead on the issue.
From April, competition in the health service will be extended to include a host of community services such as physiotherapy and podiatry - it is already available to patients who are undergoing non-emergency operations such as knee and hip replacements.

Which brings me to THIS
Eight NHS trusts have been warned about anti-competitive behaviour over the way they ran their private patient units.
The trusts - all based in south-east England - were reported to the Office of Fair Trading by a whistleblower after they exchanged information about pricing.
They escaped a formal investigation by giving voluntary assurances they would no longer discuss pricing.
They have also agreed to train their staff in competition law.
The exchange of commercially sensitive pricing information can result in higher prices for customers as it can diminish incentives to compete on price.
The OFT has the power to impose large financial penalties when such practices are uncovered.
But in this case the regulator decided not to carry out a formal investigation as it judged the exchange of information was down to a lack of awareness.
The eight trusts involved were: Brighton and Sussex, Frimley Park, East Sussex Healthcare, Portsmouth, Dartford and Gravesham, Southampton, Epsom and St Helier, North Hertfordshire and my very favourite butcher’s shop- Frimley Park,
Deborah Jones, of the OFT, said: "We welcome the assurances given by these trusts which have enabled us to bring our preliminary investigation to a close."

Keeping with the Blighty icon theme 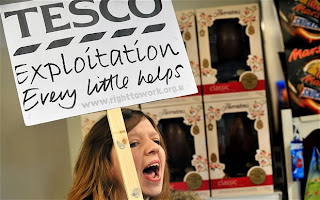 Tesco could be fined up to £200,000 after foreign students at one of its warehouses were found to be working illegally.
Authorities found the students, of almost a dozen nationalities, were working significantly longer hours than their visas allowed at the warehouse operated by Britain’s biggest supermarket chain.

The breaches were discovered after immigration officials swooped on the Tesco.com building in Croydon, south London, last month.

It is understood that at least seven of the students, none of whom has been identified, have been deported. It follows Home Office operations to put a stop to “visa abuse”.

Officials discovered the students, who were predominantly of Bangladeshi and Indian origin, had been working up to three-and-a-half times longer than their visas allowed.

The Daily Telegraph understands that a further 15 students remain under investigation. The Home Office would say only that inquiries were “ongoing”.

Tesco was subsequently issued with a “notification of potential liability”. Authorities are now deciding whether to go further and issue the employer with a notification of liability, and a fine of up to £10,000 per illegal worker. The Home Office said the company needed to provide “evidence that it was carrying out the legally required checks to avoid a fine”.


The retailer said it was “co-operating fully” with the UKBA, adding that it had tightened its procedures. It did not condone employing illegal workers.

Over the big salty thing that isn’t the pacific 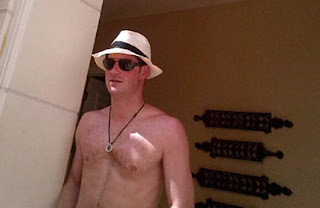 Allegedly a certain ginger haired squaddy has been spotted partying poolside with Hollywood royalty at a Las Vegas casino.
The third-in-line heir to England's throne was at Wet Republic on Saturday, an exclusive club at the MGM Grand which was hosting a party celebrating the start of Jennifer Lopez's tour with Enrique Inglesias, People reported.
The shirtless royal reportedly went largely unnoticed, with J-Lo attracting all the attention.
He sipped Grey Goose and chatted with his entourage, a small group of male friends, and some girls who had joined the group.

The next day he was seen again sipping vodka and beer and throwing inflatable beach balls at passing women.

That night he went to a VIP pool party and jumped into the water in his jeans.

Somewhere on this wobbly world


No guns, no traps, just his wits and a song.

Watch as the man above sings for his supper.


Must try that....sorry about the sound, click on the link over the video and watch the original.


Across the channel and right a whimsy 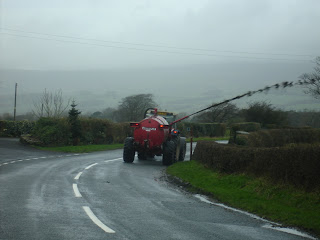 A German farmer poured manure on a group of trance music fans who organized an improvised open air festival on his land, the N-24 TV channel reported.

At first, the elderly farmer from the northern German province of Mecklenburg-Western Pomerania tried to persuade about 40 Goa trance fans, who gathered at his field without permission, to end their party.
When they refused, he drove a tank-truck with manure to the place, took a hose and turned the faucet on.
The participants, who had to immediately end their party for apparent reasons, complained to police about damage done to their cars, tents and other property, which they estimated at 5,000 euro ($6,100).
The incident is being probed by local prosecutors, who are to decide whether a case should be launched.


Slurry with a fringe on top?

How to debug your code using a rubber duck 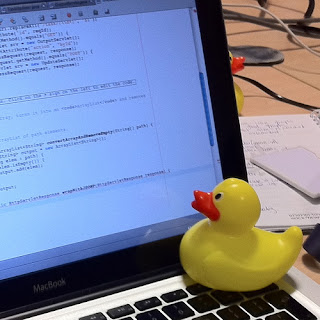 Rubber duck debugging, Rubber Ducking, or the Rubber Duckie Test is an informal term used in software engineering to refer to a method of debugging code. The name is a reference to an apocryphal story in which an unnamed expert programmer would keep a rubber duck by his desk at all times, and debug his code by forcing himself to explain it, line-by-line, to the duck.


To use this process, a programmer meticulously explains code to an inanimate object, such as a rubber duck, in the expectation that upon reaching a piece of incorrect code and trying to explain it, the programmer will notice the error.  In describing what the code is supposed to do and observing what it actually does, any incongruity between these two becomes apparent.


In a nutshell, a software engineer places a generic rubber duckie on your desk. Every time you make a big coding decision or implementation, you explain how it all works to the rubber duckie. If you find yourself straining for an explanation, or if you find yourself unable to even come up with something logical, stop. The duckie has served its purpose -- it's helped you expose a bug or design flaw or implementation flaw that otherwise might have gone unnoticed.

Thank him/her upstairs that I got out of computers....


And today’s thought:
Do you really want me to tell you? 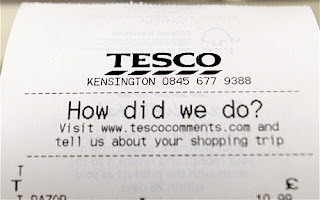