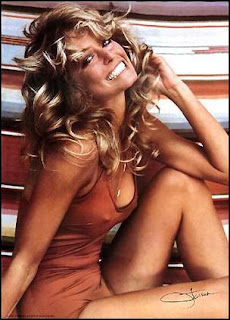 Got confused yesterday and thought it was Friday, hence the strange title, but today is FRIDAY, and as I sit here in the gloom, waiting for the thunderstorms to begin and destroy the roses and other plants, I see that the media are screaming about the death of wacko Jacko, good singer, poor human being.

The other death that is in the news is that of Farrah Fawcett who died from rectal cancer, and showed true strength of character and bravery facing the inevitable, which brought back unwanted memories of Mrs “A”, and so this will be a short post.

I know which of these two people I would like to go to heaven if there is one.

I mention these stories because James Higham over at Nourishing Obscurity has some concerns about his health, tinnitus being one, I would like to say that I have the full blown stereo variety of this very annoying, intrusive “illness”, as well as being slightly deaf in my left ear, you do learn to live with it, mainly because you have no choice, there is some research going on into a “cure”, my method is to plug in the mp3 player and blithely carry on with music flooding my consciousness, there are I believe some ear pieces that produce the same sound as the tinnitus and can cancel out the sound, but are only available in the private sector at a fairly high cost.

And it does have its up side; you can ignore boring people, with the excuse “sorry I can’t hear you”.

But as James says “[optimism] better for the mental health”.