Dark, dank, dingy and dismal at the Castle this non bank holiday morn, the arm is still OKish, my front toof fell out (again) to be replaced with a “partial” false thingy which I can’t use because it is painful and makes me vomit, and the Castle now has a water meter.

And staying on the subject of H2o 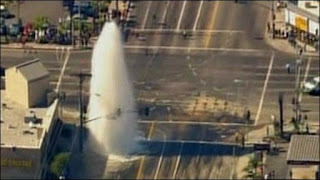 It seems that despite oodles of sky water and huge increases in the cost of the wet stuff more than half of water companies will not be required to reduce leakages before 2015, despite the worst drought in 25 years.
Data obtained by the Guardian from the regulator Ofwat also shows the entire water industry will cut leaks by only 1.5% in that time.
Every day 3.4bn litres of water leaks from the system, almost a quarter of the entire supply.
After two years of low rainfall, drought has been declared across southern and central England, with no end in sight for the hosepipe ban imposed in many places. The wettest April on record has revived rivers, but groundwater reserves remain low as the water runs off hardened ground.
The worst-performing company, Southern Water, which supplies Sussex, Kent, Hampshire and the Isle of Wight, missed its latest leak target by 16% and had to pay £5m back to customers, but will be allowed to increase its leakage by 6% by 2015.
The average annual customer bill for water has risen by £64 since 2001 and is now £376, while the companies collectively made £2bn in pre-tax profits and paid £1.5bn in dividends to shareholders in 2010-11.
Germany's RWE sold Thames Water, Britain's largest water company, to Macquarie, the Australian bank, for £8bn in 2006. At the time, Macquarie also owned South East Water, but it was sold on to Australia's Hastings Funds Management when Macquarie bought Thames. South East then merged with Mid Kent Water in 2007, and the new group is owned by Hastings Diversified Utilities Fund and the Utilities Trust of Australia.

This is of course revenge by them Dahn Unda for sending all our ne’re do wells there back in the dark ages.... The recent record rainfall has triggered a spike in the number of "thunderstorm asthma" admissions to hospitals, visits to doctors’ surgeries and emergency out-of-hours calls.
Medics say the heavy rain stirs fungal spores, especially one identified as alternaria which can cause a life-threatening asthma attack.
Dr Prasanna Sankaran, a specialist registrar in respiratory medicine at the Norfolk and Norwich hospital, said:"The new cases are often after heavy rain and thunderstorms which can trigger an attack.
"The fungal spores are released by the heavy rain and come up from the soil anywhere that it is damp. It is sometimes difficult to pinpoint the exact cause but this is a very under-recognised cause of asthma.
"The advice to sufferers is to stay indoors during thunder storms and keep doors and windows closed.

Right a bit to non Germany
Two Polish architects have spent eight months building a “house upside down” in Austria. 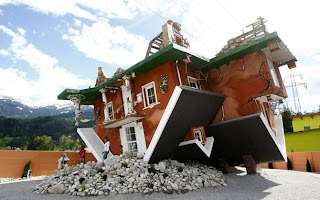 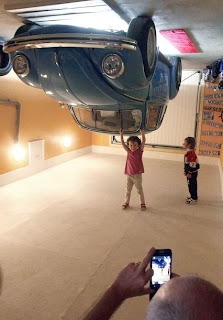 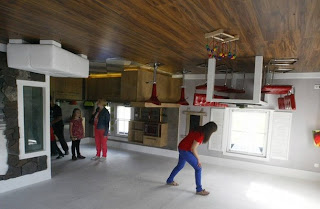 What’s his/her name upstairs knows why but the Poles probably had the plans the wrong way up.

Right even more
A small treat for those of you who enjoy watching others being terrified. 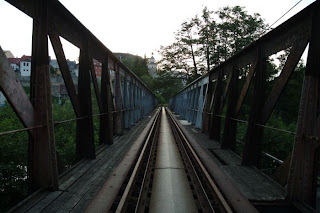 Thieves in the Czech Republic have made away with a ten-tonne steel pedestrian bridge in the latest case of scrap metal heists plaguing the country, police said.
"The police know the identity of thieves, an investigation is underway," local police spokeswoman Katerina Bohmova told AFP.
Using a crane, a crafty group of thieves dismantled the bridge and about 200 metres (218 yards) of railway track using a crane, SZDC, a company managing Czech railway infrastructure confirmed.
The thieves even managed to dupe police officers during a routine check as they were dismantling the booty, showing officers forged documents saying they were working on a new bicycle path.
The stolen metal is valued at around 4,800 Euros ($6,300), according to the SZDC.

That’s it: I’m orf to build a PC with magnetic bacteria 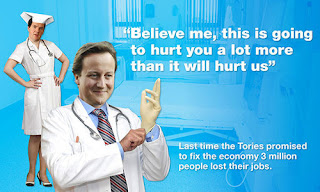