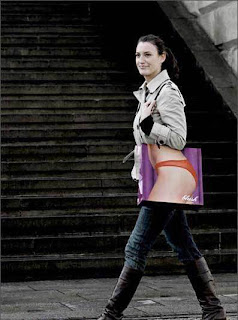 It appears that odd happenings are international; today’s entries are from around the world.

A tenant in a Regina condo has been forced to demolish a snow fort he built in his back yard after a property management company told him they thought it posed a safety risk.

Bruce Lunan fought the order for weeks, but now he's given up and is tearing down the 2.4-metre structure that was topped by a Canadian flag.

Lunan said the fort had been a big hit with the neighbourhood children.

“It's a tradition,” said Lunan. “My dad took me out every year since I was little. We'd get snow and built a snow fort. It's Canadian.”

Lunan questions some of the safety concerns raised by the property management company, noting that SaskPower told him there was no danger in having the igloo next to his power box.

As for a letter that told him it was a fire concern, Lunan could only look at the frozen structure and shrug.

The president of ICR General Property Management said the company was within its rights as tenants are not allowed to build things on property they don't own.

CANBERRA (Reuters) – A bungling Australian car thief was nabbed after accidentally locking himself in the vehicle he was trying to steal, police said Wednesday.

Police were called to a house in Adelaide after two thieves were heard trying to steal a car.

On arrival they were surprised to find a 53-year old man hiding inside the vehicle.

"The man, while breaking into the car, had locked himself in the car and couldn't get out," South Australian police said, adding a second thief was found hiding in nearby bushes.


BITHLO, Fla. – Authorities said a man threw a Molotov cocktail at his neighbor's trailer, but the wind shifted and set fire to two cars, a pickup and a travel trailer in the man's own yard.

The Florida Highway Patrol reported that a 51-year-old man got into a fight with his neighbor on Tuesday night and threw the makeshift gasoline bomb.
Authorities believe alcohol was involved.


A 22-year-old American man has been arrested after an early-morning naked bath in the historic Barcaccia fountain at the foot of Rome's Spanish Steps, an Italian news agency reports.

AGI news agency says the man stripped and bathed in the 17th-century Baroque fountain in front of a crowd of tourists, before being led away by police.

It says he faces charges of committing an obscene act.

The incident comes less than two weeks after a drunken man was arrested for driving his car down the steps that spiral down to the fountain, one of Rome's most popular tourist attractions.


Lottery loser sues for distress
A Dutch woman has lost her compensation claim for mental distress she suffered from missing out when her neighbours won a lottery windfall.
Prize winners are chosen by postal code and Helene de Gier would have shared in the $22.2 million if she had bought a $13.50 ticket, as her seven neighbours in the town of Heusden did.
Ms de Grier had accused the organisers of "emotional blackmail" and demanded compensation, but court documents showed she had lost.
The judgement said lottery organisers could not be held responsible for those who fail to take part and later regret it.
Lake goes missing in Chile
A lake in southern Chile has mysteriously disappeared; prompting speculation the ground has simply opened up and swallowed it whole.
The lake was situated in the Magallanes region in Patagonia and was fed by water mostly from melting glaciers.
It had a surface area of between 4 and 5 hectares, about the size of 10 soccer pitches.
"In March we patrolled the area and everything was normal," Juan Jose Romero, regional director of Chile's National Forestry Corporation (CONAF) said.
"We went again in May and to our surprise we found the lake had completely disappeared.
"The only things left were chunks of ice on the dry lake-bed and an enormous fissure."
CONAF is investigating the disappearance.
One theory is that the area was hit by an earth tremor that opened a crack in the ground which acted like a drain.
Southern Chile has been shaken by thousands of minor earth tremors this year.

Would-be robber robbed
A would-be German thief has gone from predator to victim when he tried to mug a taxi driver but ended up having his own wallet snatched instead.
Police in the western town of Aldenhoven say a scuffle broke out between the two after the 20-year-old stole the driver's wallet.
They say the cabbie not only recovered his property but also took his attacker's wallet.
The driver then locked himself in his taxi and called the police, who were amazed to find the mugger waiting patiently for them on the curb next to the vehicle when they arrived.
"He wanted his wallet back," a police spokesman said.
After taking the man in for questioning, police released him and returned his wallet.
He faces charges of attempted robbery.

Since my last report, he has reached rock bottom and has started to dig.

His men would follow him anywhere, but only out of morbid curiosity.

I would not allow this associate to breed.

Works well when under constant supervision and cornered like a rat in a trap.

When she opens her mouth, it seems that this is only to change whichever foot was previously in there.

He would be out of his depth in a puddle.

This young lady has delusions of adequacy.

She sets low personal standards and then consistently fails to achieve them.

This associate should go far - and the sooner he starts the better.

This associate is depriving a village somewhere of an idiot.

"The only real mistake is the one from which we learn nothing." John Powell

NHS-THE OTHER SIDE
Posted by Angus Dei at 08:33 1 comments