The big, warm yellow thing is out at the Castle this morn, there is a smidge of atmospheric movement and the liquid metal gauge it tottering on the coldish side.
Day three after having my Periosteal pecked, the elbow is now a nice shade of purple with yellow bits and despite the confidence of my general medic it still hurts-ho hum.... 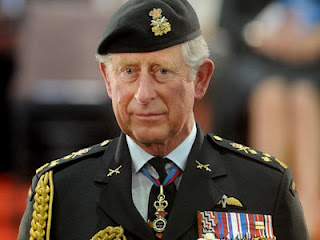 Has apparently been awarded the highest rank in all three military services by mummy, tree hugger Charlie is now a Field Marshal, Admiral of the Fleet and Marshal of the Royal Air Force.


Let’s hope we are never invaded by Dutch Elms....


And staying on those who know the right people

A Government lawyer who controversially gave the green light for Jeremy CHunt to oversee Rupert Murdoch’s bid for control of BSky has been knighted.
Paul Jenkins, the chief executive and permanent secretary of the Treasury Solicitor’s Department since 2006, is made a knight and a member of the Order of the Bath.
A letter from Mr Jenkins was used by Prime Minister David Cameron to defend his conduct over the bid by Rupert Murdoch’s News Corporation for control of satellite broadcaster BSkyB in 2010 at the Leveson inquiry this week.
Mr Jenkins had agreed Mr CHunt could rule on the deal despite not seeing a private memorandum to Mr Cameron in which Mr CHunt said he backed the Murdoch bid.
However, Mr Cameron quoted a letter from Mr Jenkins that suggested he would not have altered his advice even if he had seen the private memo.


Apparently we have all been here before 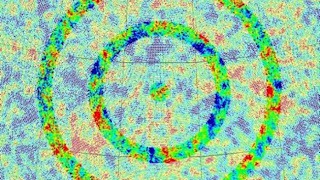 Professor Roger Penrose a leading Oxford University scientist claims to have evidence of stars and galaxies that existed long before the universe as we know it formed.
He reckons that cosmic radiation discovered by one of NASA's telescopes is older than the Big Bang.
The researcher shows that the cosmic radiation background (CMB) formed in concentric circles that had cooled to a temperature of -270C over the 14 billion years since the universe came into being.
Prof Penrose and his colleague Professor Vahe Gurzadyan of the Yerevan State University in Armenia claim to have 12 examples of the circles, some of which have five rings - meaning that the objects had five massive events in their history.
The scientists believe the circles are imprints of violent gravitational forces generated by black holes that existed long before the Big Bang.
The research casts doubt upon the widely-held theory that the universe has continued to expand since the Big Bang and will continue to do so until it ceases to exist.
Prof Penrose says that his research shows that all matter in the universe will eventually be consumed by black holes, leaving only energy behind which will in turn trigger the next Big Bang.

Luckily I only have one ring but Uranus has thirteen....... 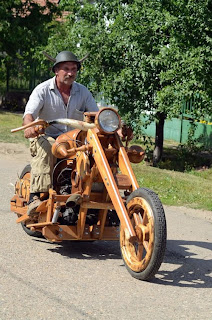 Istvan Puskas, a motorcycle enthusiast from Hungary took the term “chopper” literally and has spent the last two years chopping his dream ride from black locust wood.
Instead of chromed steel, the handlebars and exhaust pipes are made from cow’s horns, and the amateur bike-maker used deer antlers as decorations.
He used the engine of a small Fiat built in Poland under license from the Italian car maker, fuelled with petrol from a small wooden barrel that serves as a gas tank.

And it works! I just hope he has treated it for woodworm…

Left more than a fair way to a fairway 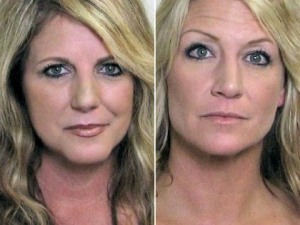 Two Missouri women are accused of showing off more than their putting skills at a south western Illinois golf course.
Madison County Sheriff's Capt. T. Mike Dixon says investigators responded to complaints of lewd behaviour Monday at the Woodlands Golf Course in Foster Township and saw the women displaying their breasts.
Now, authorities in Madison County have charged 45-year-old Shelly Lewis and 43-year-old Alicia Binford of O'Fallon, Mo., with public indecency.
Binford and Lewis couldn't be reached for comment Tuesday. Binford's home telephone number has been disconnected. Lewis hasn't returned a message left at her home. Court records don't show if they have an attorney.
Both women are free on bond.


I never found golf that exciting…

That’s it: I’m orf to soak up some CO2 with "metal-organicframework" stuff.

And today’s thought:
Sex on the beach Olympics