Come fly with me; Talking sense; Standing room only; Grand and a half move; and the Tuesday Numpty

Weather as per, and I have to go for my flu jab this morn, although I still don’t know why I have become a “priority” perhaps all will become clear, but then again. 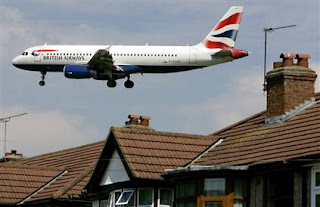 Unlike the Gov’s ‘Carbon’ policy Heathrow can expand and people can fly more without ruining the country's carbon targets, says the UK government's official climate watchdog.

It says this means other sectors of the economy must reduce emissions by 90% to allow aviation some room to grow.

But the watchdog insists that the future increase in flying must be limited to 60%, not 200% as projected by the government.

This is the really Numpty statement “Today's report on UK aviation says improved aircraft design will allow some carbon-free expansion of aviation. High-speed rail would also allow people greater mobility as they get richer.” 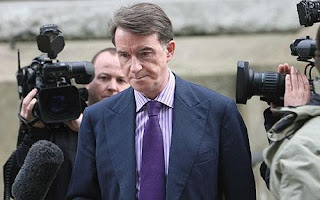 And talking of clarity; this aint: Business Secretary Lord Mandelson has earned a black mark from language campaigners after talking himself into a corner in discussing MPs' expenses.

The Plain English Campaign (PEC) singled out the Labour peer's analysis of the way the Government was being criticised in its annual "gobbledegook" awards. 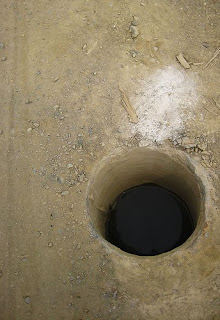 From very down under: An Australian funeral home has decided to save space by burying people vertically.

The scheme, about to be launched in Melbourne, Australia, is being offered as a simple, natural and economical approach to burial.

The Melbourne company, Upright Burials, will place a corpse in a biodegradable bag and then lower the body feet first into a cylindrical hole about 30 inches in diameter and nine-and-a-half feet deep.

Upright Burials claims the scheme is a world first and that the method will produce far less carbon dioxide than a regular burial.

Tony Dupleix, managing director, said: "When people have a traditional burial there is the process of manufacturing a coffin, which is often made out of wood or a man-made fibre, and there is regularly a plastic tray inside the coffin too.

When the land is full, it will be transferred back to pasture.

Rather than a headstone above each body, the company will simply inscribe the names of those buried on a memorial wall.

Relatives will, however, be given the exact location of their loved one. 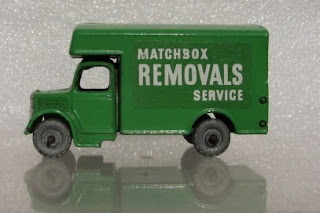 A council paid £1,500 to hire a removals van to move staff just yards across the street.

Because of health and safety fears, Lancashire Council workers were told not to try to carry boxes over the road.

Instead a van was parked outside the Guild House offices in Preston facing towards the Winckley House property into which some of the building's 200 staff were relocating. It was filled up and driven down the road to turn around before reversing over to the other side of the road.

Files, computers and office furniture were among the equipment needing to be moved.

The council and the company said the seconds-long journey was necessary to ensure the health and safety of the firm's staff.

Kevin Thompson, owner Liverpool-based The Removal Team, which carried out the work, said: "It is health and safety - we just can't carry boxes across the road.

"If you can imagine it being carried across the road and a car comes and one goes one way and one the other you will end up with a desk in the middle of the road.

"I'm sure it looked humorous and I believe it was 10 yards from one building to the other.

"It is our company's health and safety guidelines. We can't just carry boxes across the road." 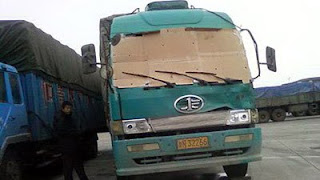 A lorry driver was pulled up by police in China - after driving for hundreds of miles with a sheet of cardboard covering his broken windscreen.

Mr Li drove by sticking his head out of the side window - in freezing conditions - or by peering through tiny holes in the cardboard, reports China News Network.

Traffic officers ordered him to pull over after spotting him on the Jinggang'ao Highway in Henan province.

"The weather was extremely cold, but we saw a lorry with a cardboard windscreen - and the driver had his head out of the side window all the time," said a police spokesman.

Mr Li jumped down from the cab with a face that was purple from the cold. He told officers he had been in an accident in Hubei province several days earlier but did not have time to repair it properly because of his tight delivery schedule.

He admitted to police that he had driven with the temporary cardboard windscreen for an incredible 400 miles.

"When there were a lot of vehicles I would drive with my head out of the window," he told police.

"I would drive like that until my neck got too sore and numb, when I would drive by looking through the little holes in the cardboard."

Police escorted the truck to a nearby service station, and ordered Li to repair his vehicle properly before going back on the road.

Numpty of the day.