I am having to “write” this with my left hand today, it is because the weather is turning colder and the reason is below. 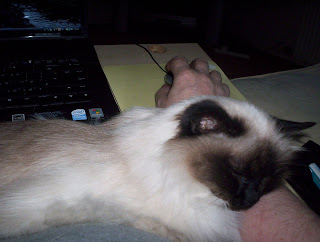 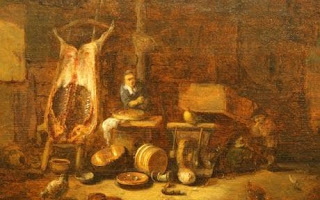 Ok so it is not exciting “news”, but I found it interesting: Over at the Telegraph there is a story of the restoration of the above painting which discovered the butchered pig hanging on a ladder in a barn.
"It was painted over, and the obvious question is, Why was it painted over?" said Mr Zwart. "Well, it was most likely not covered over by the artist. Very likely a wealthy patron bought it.
"It's this grotesque scene, this butchered animal hanging in a barn. And quite likely this patron hired another artist to paint it over."
Mr Zwart said the restored work "looks a lot different than before, and it looks better.
The restoration work also revealed information about the painting's history. It turns out that the work is a "pendant," one of a pair of paintings on a shared theme. Barn Interior's companion painting hangs in the Rijksmuseum in Amsterdam.

Why the fuss? Back in the 17th century farmers butchered their own stock, and probably hung them in a barn to cure, no fridges back then, the interesting bit is that the owner paid someone to cover it up, we mustn’t upset the gentry you know. 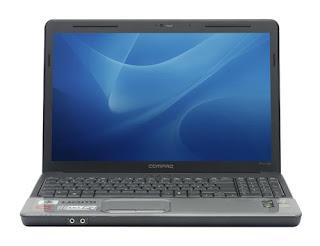 Between three and five “free” laptops turned up at the governor's offices in West Virginia, Vermont, Wyoming and Washington state, but no one had ordered them.
"They immediately raised a red flag," said Matt Turner, spokesman for West Virginia Gov. Joe Manchin. "No one said, 'Hey, we got a free gift.'"
The laptops were made by Hewlett Packard or came from its Compaq brand. The world's leading PC maker said it told law enforcement that it intercepted and turned around similar deliveries ordered for six additional states.
HP is aware that fraudulent state government orders recently have been placed for small amounts of HP equipment. HP took prompt corrective action to address the fraudulent orders and is working with law enforcement personnel on a criminal investigation," the Palo Alto, Calif.-based company said in a statement, declining further comment.
The National Governors Association has issued a bulletin about the suspicious shipments. It also said that Vermont's laptops were paid for with a credit card issued in Douglas' name - but that was not one actually held by the governor or issued by that state.
"The State Police and the FBI are working jointly to get to the bottom of why these computers were sent to West Virginia," Baylous said Thursday.
Agent Jay Bartholomew, the FBI's supervisory senior resident agent in Charleston, declined to comment Thursday.

If that happened in the UK, they would be in someone’s home by the end of play. 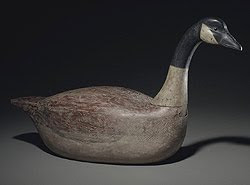 A rare, 19th century hand-carved goose decoy and considered by some to be a floating sculpture, is going on the auction block (bad choice of words there). It could bring in as much as $400,000.
The decoy was originally purchased by an American expatriate living in Argentina and then sold to a native of that country who was unaware of its origins.
The current owner, Maximo Kirton, emailed a photo of the Canada Goose decoy to Christie's several weeks ago wondering what it might be worth. It sat on a shelve at the family's sheep ranch in Patagonia, Argentina, for 10 years, and then on the mantel of his parent's Buenos Aires home for another two decades.
To Kirton's surprise, Christie's told him the goose was a very unusual example of a working decoy from the late 19th century that could conservatively fetch between $200,000 to $400,000. Not only that, it was part of an extremely rare decoy rig that usually included at least six birds.
It seems that The one coming up for sale is known as a slot-neck goose, because the head dovetails into a hollow carved body. An unusual decoy element, the head slides off "because the hunters would travel with them" up and down the eastern flyway "and that would prevent the head and neck from breaking," Holter said.
"These are highly prized by folk art collectors and working decoy collectors," he said. "They're a uniquely American art form.
Well I’ve got an old wooden flying duck in the loft any offers?

'I sit upon my bottom' 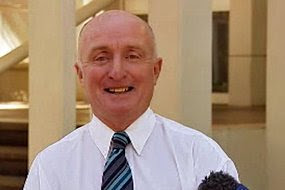 From down under: there appears to be a Politician poet in Nelson, Northern Territory, Gerry Wood, who held the balance of power in the August 14 vote, ended up making an agreement with the Government to keep them in office.
In the chamber last night, Mr Wood read out two poems about the challenging decision he had to make.
"I sit upon my bottom as my mind begins to ache," his first ditty began.
"I ponder what has happened, just a week ago to date.
"It seems like just a dream and not a real state.
"But when I open up my eyes I know it's no mistake.
"So what's the use of pondering if nothing is a fake.
"Just get on with living and laugh, not contemplate."

The second poem was about the day he had to play kingmaker.

Don’t give up the day job Gerry. 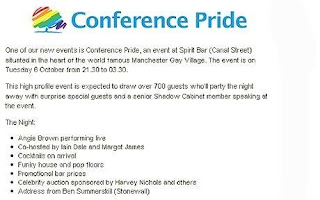 The Tories have decided to appeal to homosexuals with a new logo, The logo was displayed on the Conservative Party website as part of events billed as Conference Pride at the annual political gathering in Manchester.
More than 700 delegates are expected to attend a £15-a-head cocktail party at the Spirit Bar, in the heart of the city's famous gay village, where they will be entertained by a live performance by disco diva Angie Brown.
Andrew Brierly, 29, a party activist from Clapham, south London, said the event is a sign the true-blue party was "modernising" its image to appeal to new voters.
He said: "By hosting events like this it is hoped that voters will recognise that the Conservative party is at the forefront of agenda-setting politics.
"The party is modernising at it is not afraid to broach traditionally taboo subjects such as the rights of the homosexual community.
The event will be compered by Margot James - the party's vice-chairman and first openly lesbian candidate - and Iain Dale, the first openly-homosexual Conservative to contest a parliamentary election, and will feature "funky house and pop floors", "promotional bar prices" and a "celebrity auction" sponsored by Harvey Nichols.
David Cameron has repeatedly promised to make his party more inclusive. He told Pink News last year: "I want the Conservative Party to be an open and inclusive party which speaks for everyone in Britain regardless of their race, background or sexuality and I am determined that we will act to ensure that at every level, we are representative of modern Britain."
Just a point Dave, but I think that Tory policies will be the deciding factor for the electorate not a bleeding logo.

And finally finally:
A rant:

The Gov screws us again 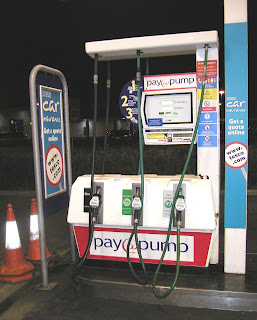 Those morons in what is laughingly called the Government have put up fuel duty yet again in the first stage in the removal of government assistance to help families and businesses through the recession.
The Treasury is planning five tax rises worth more than £10 billion between now and the general election. It is also planning to end temporary schemes to ease the downturn, such as car scrappage.
Motorists will be the first affected, with the rise in fuel duty from tomorrow despite petrol prices of 105p a litre. This measure was delayed from last year because of high oil prices. It will generate £1.3 million a day in additional revenue for the Treasury, according to the AA, and means that the taxman takes 65 per cent of the price of a litre of petrol.
And don’t expect any help from the Tories:
The Conservatives said: “Family budgets are being squeezed yet further.” The party is consulting on plans for a “fair fuel stabiliser” to replace the current fuel tax regime, so that tax falls when the price rises, and rises when petrol prices fall. “This would protect the public finances from fluctuations in the international oil price and help families cope with rapid changes in the cost of living,” a spokesman said.
Or in other words there won’t be any reductions, the price will stay the same regardless of the price of oil.
So much for “helping” the electorate through the recession, or is it over and no one has told us?
Bastards.