His Maj decided he would “help out” by curling up on my chair as soon as I got up to do something.

Sigmund’s great grandson who is apparently the Minister for Welfare Reform has been letting orf a bit of steam about the benefits system.
Baron David Anthony Freud-ex Financial Times journalist, ex-‘business man’, ex-Banker and now “advisor” to the Piss Poor Policies Millionaires Club Coalition on “welfare reform” has allegedly said the benefits system was "dreadful" and allowed lone parents and sickness claimants to "have a lifestyle" on the state.

Poor people should be prepared to take more risks because they have the least to lose, and insisted he understood the reality of living on benefits, arguing "you don't have to be the corpse to go to a funeral"..
He added: "You know, the incapacity benefits, the lone parents, the people who are self-employed for year after year and only earn hundreds of pounds or a few thousand pounds, the people waiting for their work ability assessment then not going to it - all kinds of areas where people are able to have a lifestyle off benefits and actually off conditionality."

His “lordship” dismissed the possibility of taking part in a television documentary which filmed him living on benefits for a week, something a number of politicians have done in the past.


"I have thought of the issue," he said. "The trouble is it's a stunt when someone like me does it because you do it for a week. That's not the point."

Someone like him- Rich, over educated, arrogant, ignorant, and condescending wouldn’t last a day on benefits. 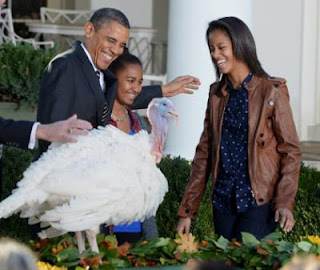 A turkey pardoned by President Barack Obama at Thanksgiving 2011 was put down three days prior to this year's holiday, Virginia's Mount Vernon Estate said.
The estate, where pardoned turkeys are taken to live out their lives, said Peace, the understudy for 2011's turkey, Liberty, was put down Monday after suffering an illness during the weekend, The Independent reported Friday.
The newspaper said news of the bird's demise has "conspiracy theorists all aflutter" but Rebbecca Aloisi, vice president for marketing at the Mount Vernon Estate, said there was no conspiracy to have the pardoned turkey end up as part of a Thanksgiving dinner.
"I know that it was done in a humane manner but I don't know the mechanics," she said. "I appreciate where you're going with this, but I assure you that these birds are extremely well cared for."

Still got the touch then Barack


Right to the land of engineering and logic 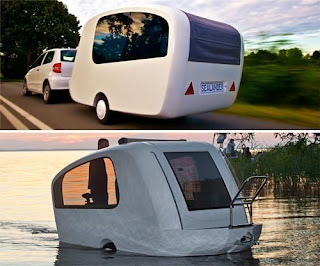 Cometh the Sealander schwimmcaravan; an amphibious “mobile home” in which you can “Enjoy your free time, an innovative mobile home with amphibian characteristics. It offers utmost flexibility. Just hitch the SEALANDER to your car and go. Enjoy an unrestricted ride, for when you arrive ashore the journey hasn't ended, it has only just begun”,


“Thanks to the integrated waterproof chassis the SEALANDER can be let into water without need of a boat slip or trailer system. The width of the lower shell provides stability and a secure position on water. Because of the modest draught you can explore even shallow waters. The low-emission electric motor permits license free access to most inland waters. The rechargeable battery of the outboard engine also supplies electricity to the interior living area and can easily be recharged from the towing vehicle during the journey on land.”

Must get one for the moat; mind you it could come in handy in waterlogged Blighty.

Back in boo-hoo Blighty 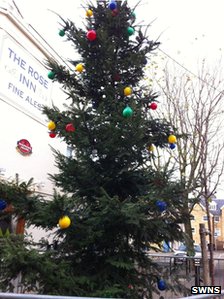 A Kent town's Christmas display was booed by crowds when the lights were switched on.
A few hundred people gathered in Herne Bay last Friday to watch the stars of the local Sleeping Beauty panto, Gareth Gates and Toyah Wilcox, turn them on.
One person said the decorations looked like normal light bulbs, while another said he had more in his shop window.
Canterbury City Council said it was the same display as last year, but it would consult with local businesses.
Greengrocer Karen Truelove described the switch-on in the town centre as "completely flat".
"There was nothing for people to look at... within half-an-hour the town was like a ghost town."


No change there then... 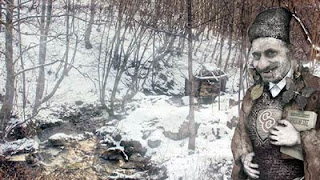 Sales of garlic are booming in western Serbia after the local council issued a public health warning that a vampire was on the loose.


The warning came after an old ruined mill, said to once have been the home of notorious vampire Sava Savanovic, collapsed.


Savanovic was said to have lived in the old watermill on the Rogacica River, at Zarozje village in the municipality of Bajina Basta where he drank the blood of anybody that came to mill their grain.


The watermill was bought by the local Jagodic family, and they were too scared to use it as a mill - but discovered it was a goldmine when they started advertising it to tourists.


But the family were worried about carrying out building work on the mill because they were scared they might disturb the vampire or unleash his wrath if his home was messed around with - and now the property has collapsed through lack of repair.


But for locals it has sparked rumours that the vampire is now free once again.


Local mayor Miodrag Vujetic admitted: "People are worried; everybody knows the legend of this vampire and the thought that he is now homeless and looking for somewhere else and possibly other victims is terrifying people. We are all frightened."


He confirmed that the local council had advised all villagers to put garlic on their doors and windows to protect them from the vampire as it was well known they can't stand the smell.


He added: "We have also reminded them to put a Holy cross in every room in the house." 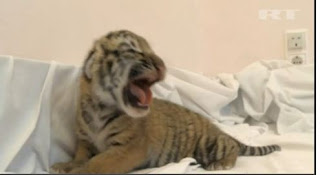 Three tiger cubs abandoned by their mother have found an unusual replacement - a white Swiss Shepherd dog called Tallim.
The cubs were rejected by their natural mother, a tigress called Bagira, soon after their birth in a Russian zoo on November 14.
The Oktyabrsky zoo in the Black Sea resort of Sochi immediately advertised the vacant position of a tiger mother on the internet.
Staff had been prepared for the situation because Bagira had abandoned two other newborn cubs five months previously.
They found a white Swiss Shepherd dog from Yeysk, in the Krasnodar region, to take over.
The canine is now feeding and nurturing the three cubs - two males named Olymp and Dar and one female named Talli after her adoptive mother.
Although the tiger cubs initially showed their claws and hissed, Tallim nursed them patiently and afterwards showered them with attention, nudging them playfully.
The zoo staff says the tiger cubs do not pose any threat to their adoptive mother.

That’s it: I’m orf to have a look at Sinocalliopteryx 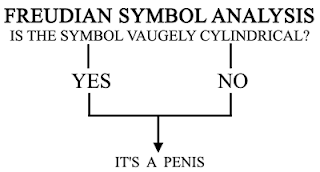